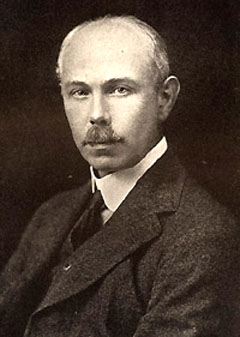 Francis William Aston ( &ndash; ) was a British and who won the 1922 "for his discovery, by means of his , of isotopes, in a large number of non-radioactive elements, and for his enunciation of the whole-number rule." [cite web | url=http://nobelprize.org/nobel_prizes/chemistry/laureates/1922/ | title=The Nobel Prize in Chemistry 1922 | accessdate=2008-04-14 | publisher=Nobel Foundation ]

Francis Aston was born in Harborne, now part of Greater Birmingham, on September 1, 1877. He was the third child and second son of William Aston and Fanny Charlotte Hollis. He was educated at the Harborne Vicarage School and later Malvern College in Worcestershire where he was a boarder. In 1893 Francis William Aston began his university studies at (later part of the ) where he was taught physics by and chemistry by Frankland and Tilden. From 1896 on he conducted additional research on in a private laboratory at his father’s house. In 1898 he started as a student of Frankland financed by a ; his work concerned optical properties of compounds. He started to work on fermentation chemistry at the school of brewing in Birmingham and was employed by W. Butler & Co. Brewery in 1900. This period of employment ended in 1903 when he returned to the University of Birmingham under Poynting as an Associate.

After the death of his father, and a trip around the world in 1908, he was appointed lecturer at the University of Birmingham in 1909 but moved to the in on the invitation of in 1910.

Joseph John Thomson revealed the nature of the s and the discovered the electron and he was now doing research on the positively charged "Kanalstrahlen" discovered by in 1886. The method of deflecting particles in the "Kanalstrahlen" by magnetic fields, discovered by in 1908, and electric fields were used to separate the different ions by their charge and mass. The first sector field mass spectrometer was the result of these experiments. The ions followed a parabolic flight path and were recorded on photographic plates from which their exact mass could be determined by the .

It was speculations about isotopy that directly gave rise to the building of a mass spectrometer capable of separating the isotopes of the chemical elements. Aston initially worked on the identification of s of the element and later chlorine and mercury. First World War stalled and delayed his research on providing experimental proof for the existence of isotopes by mass spectroscopy and during the war Aston worked at the Royal Airforce Establishment in Farnborough as a Technical Assistant working on aeronautical coatings.

After the war he returned to research at the Cavendish Laboratory in Cambridge, and completed building his first mass spectrograph (now mass spectrometer) that he reported on 1919. Subsequent improvements in the instrument led to the development of a second and third instrument of improved mass resolving power and mass accuracy. These instruments employing electromagnetic focusing allowed him to identify 212 naturally occurring isotopes. In 1921, F. W. Aston became a fellow of the and received the Nobel Prize in Chemistry the following year.

His work on isotopes also led to his formulation of the which states that "the mass of the oxygen isotope being defined, all the other isotopes have masses that are very nearly whole numbers," a rule that was used extensively in the development of . The exact mass of many isotopes was measured leading to the result that hydrogen has a 1% higher mass than expected by the average mass of the other elements. Aston speculated about the subatomic energy and the use of it in 1936.

Aston was a skilled and interested in . He joined several expeditions to study solar eclipses to Benkoeben in 1925, in 1932; Memphri in 1936 and Kamishri in . He also planned to attend expeditions to in 1940 and in 1945 in later life. Aston died in Cambridge on November 20, 1945,

The Aston was named in his honour.