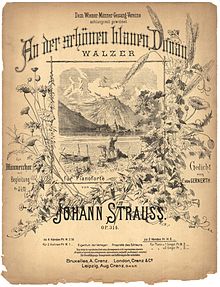 The Blue Danube is the common English title of An der schönen blauen Donau, Op. 314 (German for On the Beautiful Blue Danube), a waltz by the Austrian composer Johann Strauss II, composed in 1866. Originally performed 13 February 1867 at a concert of the Wiener Männergesangsverein (Vienna Men's Choral Association), it has been one of the most consistently popular pieces of music in the classical repertoire. Its initial performance was only a mild success however and Strauss is reputed to have said "The devil take the waltz, my only regret is for the coda—I wish that had been a success!"

After the original music was written, the words were added by the Choral Association's poet, Joseph Weyl.[1] Strauss later added more music, and Weyl needed to change some of the words.[2] Strauss adapted it into a purely orchestral version for the World's Fair in Paris that same year, and it became a great success in this form. The instrumental version is by far the most commonly performed today. An alternate text by Franz von Gernerth, Donau so blau (Danube so blue), is also used on occasion.

The sentimental Viennese connotations of the piece have made it into a sort of unofficial Austrian national anthem. It is a traditional encore piece at the annual Vienna New Year's Concert. The first few bars are also the interval signal of Österreichischer Rundfunk's overseas programs. On New Year's Eve, the waltz is traditionally broadcast by all public-law television and radio stations exactly at midnight.

When Strauss's stepdaughter, Alice von Meyszner-Strauss, asked the composer Johannes Brahms to sign her autograph-fan, he wrote down the first bars of The Blue Danube, but adding "Leider nicht von Johannes Brahms" ("Alas! not by Johannes Brahms").[3]

The piece's popularity has been bolstered, as it became famous for its prominent use in the highly influential Stanley Kubrick film 2001: A Space Odyssey. In the movie, the piece is used to accompany a lengthy scene in which a Pan Am spaceplane is seen docking with a space station, as well as its trip to the Moon. Its use is, perhaps, intended to create a parallel between the intricate docking procedure and the role of two dancers in a waltz. The piece is also used to accompany the film's closing credits. The movie's use of this piece has led to further use in pastiches of it.

The first few bars of The Blue Danube waltz, signed by the composer.

The work commences with an extended introduction in the key of A major with shimmering (tremolo) violins and a horn spelling out the familiar waltz theme, answered by staccato wind chords, in a subdued mood. It rises briefly into a loud passage but quickly dies down into the same restful nature of the opening bars. A contrasting and quick phrase in D major anticipates the waltz before three quiet downward-moving bass notes "usher in" the first principal waltz melody.

The first waltz theme is familiar gently rising triad motif in cellos and horns in the tonic D major, accompanied by the harp; the Viennese waltz beat is accentuated at the end of each 3-note phrase. The Waltz 1A triumphantly ends its rounds of the motif, and waltz 1B follows in the same key; the genial mood is still apparent.

Waltz 2A glides in quietly (still in D major) before a short contrasting middle section in B-flat major. The entire section is repeated.

A more dour waltz 3A is introduced in G major before a fleeting eighth-note melodic phrase (waltz 3B). A loud Intrada (introduction) is then played. Waltz 4A starts off in a romantic mood (F major) before a more joyous waltz 4B in the same key.

After another short Intrada in A, cadencing in F-sharp minor, sonorous clarinets spell out the poignant melody of waltz 5A in A. Waltz 5B is the climax, punctuated by cymbal crashes. Each of these may be repeated at the discretion of the performer.

The coda recalls earlier sections (3A and 2A) before furious chords usher in a recap of the romantic Waltz 4A. The idyll is cut short as the waltz hurries back to the famous waltz theme 1A again. This statement is cut short, however, by the final codetta: a variation of 1A is presented, connecting to a rushing eighth-note passage in the final few bars: repeated tonic chords underlined by a snare drum roll and a bright-sounding flourish.

A typical performance lasts around 10 minutes, with the seven-minute main piece, followed by a three-minute coda.

The Blue Danube is scored for the following orchestra:

The Beautiful Blue Danube was first written as a song for a carnival choir (for bass and tenor), with rather satirical lyrics (Austria having just lost the war with Prussia). The original title was also referring to a poem about the Danube in the poet Karl Isidor Beck's hometown, Baja in Hungary, and not in Vienna. Later Franz von Gernerth wrote new, more "official-sounding" lyrics:

Media related to The Blue Danube at Wikimedia Commons