The Norwegian Armed Forces (Norwegian: Forsvaret ("The Defence")) numbers about 23,000 personnel, including civilian employees.[2] According to mobilisation plans as of 2009[update], the strength during full mobilisation would be approximately 83,000 combatant personnel.[2] Norway has mandatory military service for men (6–12 months of training) and voluntary service for women. Norway has the highest military expenditures per capita in Europe.

Under Norwegian constitutional practice, the Minister of Defence is accountable to Parliament for all activities carried out by the agencies under his or her responsibility.

The Ministry of Defence (MoD) has been since 2003 an integrated structure with civilian and military personnel. Subordinate to the MoD are the "Armed Forces Military Organisation" as well as the three civilian agencies: the Norwegian Defence Research Establishment (FFI), the National Security Agency and the Defence Estate Agency.

The Chief of Defence (a four-star general or admiral) heads the armed forces, and is the principal military adviser to the Minister of Defence.

Military branches (in order of seniority):

Other main structures, include: 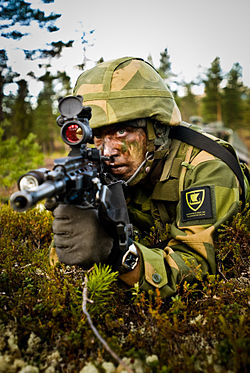 Norwegian soldier during a field exercise.