Naomi Sapir was born on Kvutzat Kinneret, a kibbutz her parents had helped found, on the shores of the Sea of Galilee. In the 1950s she served in the Israeli Defense Force's Nahal entertainment troupe, and studied music at the Rubin Academy in Jerusalem. She first married actor Gideon Shemer and had a daughter, Lali. They were later divorced; she went on to marry attorney Mordechai Horowitz, with whom she had a son, Ariel.[4] 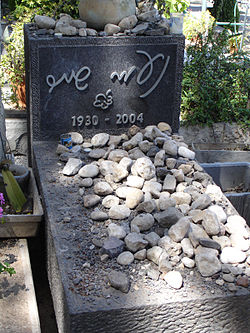 Israeli songwriter Naomi Shemer's grave on the shores of the Sea of Galilee (Kinneret). The stones were left by visitors, in keeping with an ancient Jewish custom

Shemer continued to write and perform until her death. She died of cancer in 2004, aged 73.

Shemer did her own songwriting and composing, set famous poems to music, such as those of the Israeli poet, Rachel, and adapted well-known songs into Hebrew, such as the Beatles songs "Hey Jude."[citation needed]

She composed in 1963 Hurshat Ha'Eucalyptus (The Eucalyptus Grove), a song that evokes Kvutzat Kinneret where she was born,[5] and sung in a recent version by Ishtar.

In 1983, Shemer received the Israel Prize for Hebrew song (words and melody).[6]

In 2005, she was voted the 6th-greatest Israeli of all time, in a poll by the Israeli news website Ynet to determine whom the general public considered the 200 Greatest Israelis.[7]