Roald Dahl Plass next to the Wales Millennium Centre

Roald Dahl Plass (Welsh: Plas Roald Dahl) is a public plaza in Cardiff Bay, part of Cardiff, Wales. It is named after Cardiff-born author Roald Dahl,[1] and is located on the coast along the south of the city centre. The square is home to the Senedd (Welsh Assembly Building) and the Wales Millennium Centre, a performing arts centre. The bowl-like shape of the plaza has made it a popular amphitheatre for hosting open-air concerts.[1]

Formerly named the Oval Basin, the area was one of the docks for a thriving coal port during the latter half the 19th century and much of the 20th century. Following World War II, the plaza entered a period of decay and dereliction until the 1980s, when the Cardiff Bay area was regenerated.[2]

"Plass" means plaza in Norwegian, a nod to the acclaimed writer's roots (both of Dahl's parents were from Norway) and to the Norwegian seafarers' church which stands nearby.

The dock was joined by four others: East Bute Dock, Roath Basin, Roath Dock and Queen Alexandra Dock. Cardiff had become the largest exporter of coal in the world; in 1913, Cardiff exported 10,700,000 tonnes of coal.[3] However, the Great Depression, Second World War and cheap foreign competition all caused massive damage to the Welsh coal mining industry, with the last coal export through the dock taking place in 1964. The dock was filled in to prevent collapse of the surrounding walls.[1] 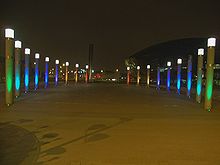 What was known as the Oval Basin was designed by artist William Pye, in conjunction with Nicholas Hare Architects and it opened in April 2000.[4][5][6] At the north end of the plaza is the Water Tower, which stands at approximately 70 feet (21 m) high with a constant stream of water running down the metallic fountain.[5] Roald Dahl Plass is today an oval shaped open space surrounded by illuminated pillars and a gravel covering over the original dock area.[1]

The plaza is often used to host concerts and other cultural events, and was a central part of Cardiff's bid for European Capital of Culture status for 2008, although it ultimately lost the bid to Liverpool.[1]

Doctor Who and Torchwood

The monument has been prominently featured in both of the BBC Wales flagship shows.

The Cardiff Rift being ripped open, partly by the TARDIS, with the Millennium Centre on the right

Roald Dahl Plass first appears in "Boom Town", an episode of the long running, sci-fi drama Doctor Who. In the show's universe, a "spatial-temporal" rift runs through Cardiff. The plaza later appears in Doctor Who's spin-off series Torchwood. The fictional Torchwood Institute has one of its headquarters, Torchwood Three, based under the square, in order to monitor alien activity through the rift. The base of the fountain can be seen passing through the building, and one of the paving tiles in the square is a decoy which hides an "invisible lift" leading down to the base.[7] 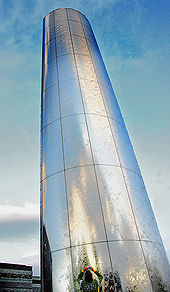