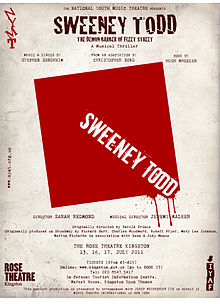 The National Youth Music Theatre or NYMT is a UK organisation for young people in the field of musical theatre, based in London. It runs acting auditions, workshops, and musical theatre productions. It is constituted as a company and registered charity under English law, formerly named Children's Music Theatre Limited.[1] 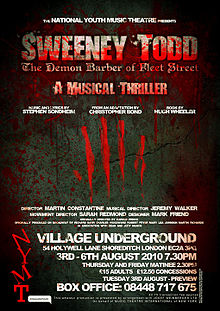 On 9 May 2011, Her Majesty The Queen and His Royal Highness The Duke of Edinburgh gave a reception at Buckingham Palace to celebrate Young People in the Performing Arts. Fifteen members of the National Youth Music Theatre spent the weekend rehearsing in the palace in preparation for their performance alongside the English National Ballet, Flawless, Alleviate and the Docklands Sinfonia in a specially commissioned theatre performance in the Ballroom, which had been inspired by Shakespeare’s Romeo and Juliet. NYMT singers and dancers joined X-Factor winner, Joe McElderry in "Something's Coming" from Bernstein's "West Side Story", excitingly choreographed by Cristian Valle. They also accompanied Rumer in the finale, performing Taylor Swift's "Love Story". The music was directed by Mike Batt. 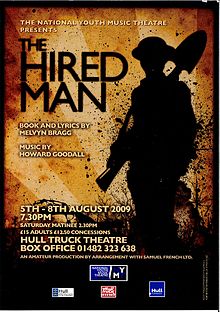 In August 2010, the NYMT staged a daring production of Stephen Sondheim’s classic musical Sweeney Todd in London. This production, directed by Martin Constantine, celebrated the composer's 80th birthday by taking this thrilling show out of a conventional theatre space and staging it within a converted Victorian warehouse in the city’s East End – Village Underground, near Spitalfields Market. [2]

Auditions are held annually for cast, musicians and technical crew. Workshops are held during most school holidays. Participants should be aged between 11 and 21 years. To find out more about these and to download an application form, visit the official website: http://www.nymt.org.uk 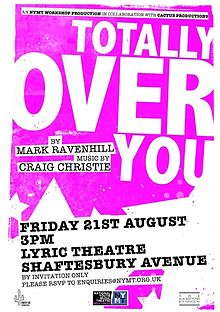 Founded in 1976 by Jeremy James Taylor, the National Youth Music Theatre’s beginnings were at Belmont, the Mill Hill Junior School. Here, under JJT’s direction and inspired by Ben Jonson’s moving epitaph on an actor who died very young, an 11-13 cast created and invented The Ballad of Salomon Pavey. Following its school performance, an adventurous and enlightened headmaster allowed his ambitious director to take the whole thing to the Edinburgh Fringe where it won fine reviews, excellent audiences, a Fringe First Award and an invitation to bring it to London as part of Her Majesty’s Silver Jubilee Celebrations. (The visit by a school company also started the ‘trend’ for schools and youth groups to take shows to the Edinburgh Fringe - a development which has grown to mammoth proportions over the years). 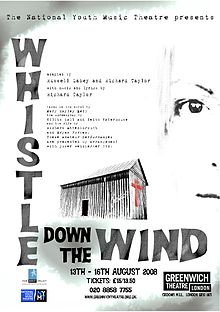 The company quickly became “The Children’s Music Theatre”, using young performers auditioned and selected from schools throughout the UK, creating a centre of excellence with many new productions, rave reviews, awards and plaudits which meant a high profile in the arts. With this profile, which by now included invitations to perform at The National Theatre and to create new music theatre works for the BBC and Granada Television, came the opportunity to inspire and educate young people through preparing for and presenting performance at the highest level. The NYMT was, as always, rich in all but funds and moved from strength to strength.

In 1985 there was a change of name and, in the same year, the first residential workshops took place, producing strong casts for summer productions. In 1984 Frank Dunlop, the new Artistic Director of the Edinburgh International Festival, invited the company to present an opera on the Festival programme. Such was the success of this that, in 1986, he presented two more NYMT productions, which raised the profile of the company to new heights. Then, in 1987, Richard Stilgoe offered NYMT the opportunity to première his new musical, Bodywork and, as a result, Edinburgh 1987 was, in Jeremy’s words, “crazy, hilarious and fantastical”. Huge audiences and rave reviews were followed by a Royal Gala Performance with HRH The Prince Edward in the audience and, emboldened by prestigious new associations, Jeremy invited HRH to become President of NYMT. In the same year, 1988, NYMT found a new sponsor, Nationwide, and moved to Sadlers Wells, providing an annual 3-week “season” and an office with a telephone. Success indeed!

An excellent first season at Sadlers Wells led to the BBC broadcast of The Ragged Child the following Christmas, a host of productions across the UK and others as far afield as New York, Toronto, Hong Kong, Tokyo, Taiwan, Norway and Greece. During this time NYMT’s new President attended at least one performance of every single production; an astute, honest and perceptive critic, who contributed hugely to NYMT’s development during these busy years.

In 1991, when the Nationwide sponsorship drew to a close, Andrew Lloyd-Webber generously took over the reins and gave the company a new lease of life which included an extraordinary short season on Broadway in the 2,600 seat City Center Theater with The Threepenny Opera and Pendragon - which won Critic's Choice in the New York Times and which also won the coveted HAMADA Edinburgh Festival Award. Bursting out of Sadlers Wells, the company moved its offices to The Royal Opera House in 1992.

In 1996, NYMT was at last recognised by the DfEE with a 3-year grant. Bugsy Malone proved an unexpected hit that year, so much so that it transferred to the Queen's Theatre in the West End at Christmas 1997 for an 11 week capacity run. The following busy years saw NYMT spread its workshops into Northern Ireland, the North East and East Anglia and, during this time, Howard Goodall and Charles Hart gave NYMT The Kissing Dance, which enjoyed a Christmas season at the Royal Opera House’s Linbury Studio Theatre, and they followed this with The Dreaming. The NYMT in 2000 were the first company to visit the new Glyndebourne Opera House with a new production of The Ragged Child.

NYMT's production of Oklahoma! which opened at the Waterfront, Belfast in 2002, moved to the Cardiff International Festival of Musicals and was warmly received by the national press when it came to the West End's Peacock Theatre for Easter 2003. In the summer of 2003, the NYMT was honoured by Sir Alan Ayckbourn who wrote and directed a new work, Orvin, Champion of Champions, for the NYMT, which he presented in his own theatre, the Stephen Joseph Theatre in Scarborough, as part of the theatre's summer season.[3]

The following two years saw a quieter period while the company took stock and drew breath. This period included a programme of development workshops in association with The Disney Corporation and Josef Weinberger to develop new musical theatre works, and in early 2004, the organisation was given indications that it would receive financial backing from the Arts Council. However, in the spring of 2005 it was announced that no funding would be forthcoming.[4][5] In the meantime, under the Chairmanship of Maggie Semple, and thanks to goodwill and support from many sources, the NYMT was able to announce a re-launch in 2006 with a production of The Dreaming for the Tonbridge Arts Festival.[6] NYMT was also honoured with the responsibility of providing the entertainment for Her Majesty The Queen at her private dinner to celebrate Her 80th birthday in Windsor Castle in April 2006.

This was followed in 2007 with two performances directed by Caroline Leslie: Fiddler on the Roof at the Bridewell Theatre in April and Little Me at the Bloomsbury Theatre in August. In 2008, the NYMT presented to critical acclaim a new production of Richard Taylor and Russell Labey’s version of Whistle Down the Wind at the Greenwich Theatre. The director was Paul Hegarty and the musical director, Jeremy Walker. [7]

As part of NYMT's Workshop Productions initiative, aimed at developing new musicals with young people, the company produced All Above Board - with book and lyrics by Hal S. Davies and music by Mike Eastman - at the Bridewell Theatre, London, in October 2008.

In the summer of 2009 the NYMT staged a new production, directed by Andrew Pearson, of Howard Goodall and Melvyn Bragg's The Hired Man. Following performances at the New Hull Truck Theatre, the show was reprised in London at RADA's Jerwood Vanbrugh Theatre in aid of the Lord Mayor's Appeal and in the presence of Lord Bragg. In the same year, NYMT showcased a new work, Totally Over You, based on a play by Mark Ravenhill and with music by Eurobeat, The Musical creator, Craig Christie. This work in progress, directed by Suzi Graham-Adriani, was performed at the Lyric Theatre, Shaftesbury Avenue.

In the 2010 New Year's Honours List, Jeremy James Taylor was appointed an Officer[8] of the Order of the British Empire (O.B.E.) ‘in recognition of services to Young People and Musical Theatre’. In August of the same year, and in celebration of Stephen Sondheim's 80th birthday, the NYMT staged a daring production of his musical thriller Sweeney Todd in London. This production, directed by Martin Constantine and Sarah Redmond, was staged within a converted Victorian warehouse in the city’s East End – Village Underground, near Spitalfields Market. With a brilliant cast of 30 - and a 25-piece orchestra of outstanding young players under the musical direction of Jeremy Walker - the production garnered 5-star reviews. [9]

Highlights of the 2011 season included an invitation from Her Majesty The Queen and His Royal Highness The Duke of Edinburgh to perform for a reception at Buckingham Palace celebrating Young People in the Performing Arts. The specially commissioned performance in the ballroom, which had been inspired by Shakespeare’s Romeo and Juliet, also featured the English National Ballet, Flawless, Alleviate and the Docklands Sinfonia. NYMT singers and dancers joined Joe McElderry in Something's Coming from Bernstein's West Side Story and accompanied Rumer in the finale, performing Taylor Swift's Love Story. Choreography was by Cristian Valle and the music was directed by Mike Batt. Then, in June, NYMT performed again for West End LIVE in Trafalgar Square. The programme included extracts from Sweeney Todd and, from the finale of Bernstein's Candide, Make Our Garden Grow. In July came the International Youth Arts Festival for which, at the invitation of Creative Youth, NYMT staged a new production of Sweeney Todd at the Rose Theatre, Kingston. The 70-strong company was directed by Sarah Redmond with new design by Holly Seager. Musical direction was by Jeremy Walker.

Plans for 2012 include a collaboration with American musical theatre composer, lyricist and playwright, Jason Robert Brown, to produce his musical, 13 in London's West End and under the direction of the composer.

Over 35 years NYMT has had a huge cast. It has also, as well as staging some of the great classics of musical theatre, created a considerable and important body of new music theatre works for performance by young people. Some of the brilliant and inspirational young performers have gone on to enrich the professional stage. All have taken with them exceptional skills, memories and a drive to support education in the arts which bodes well for our country’s development.