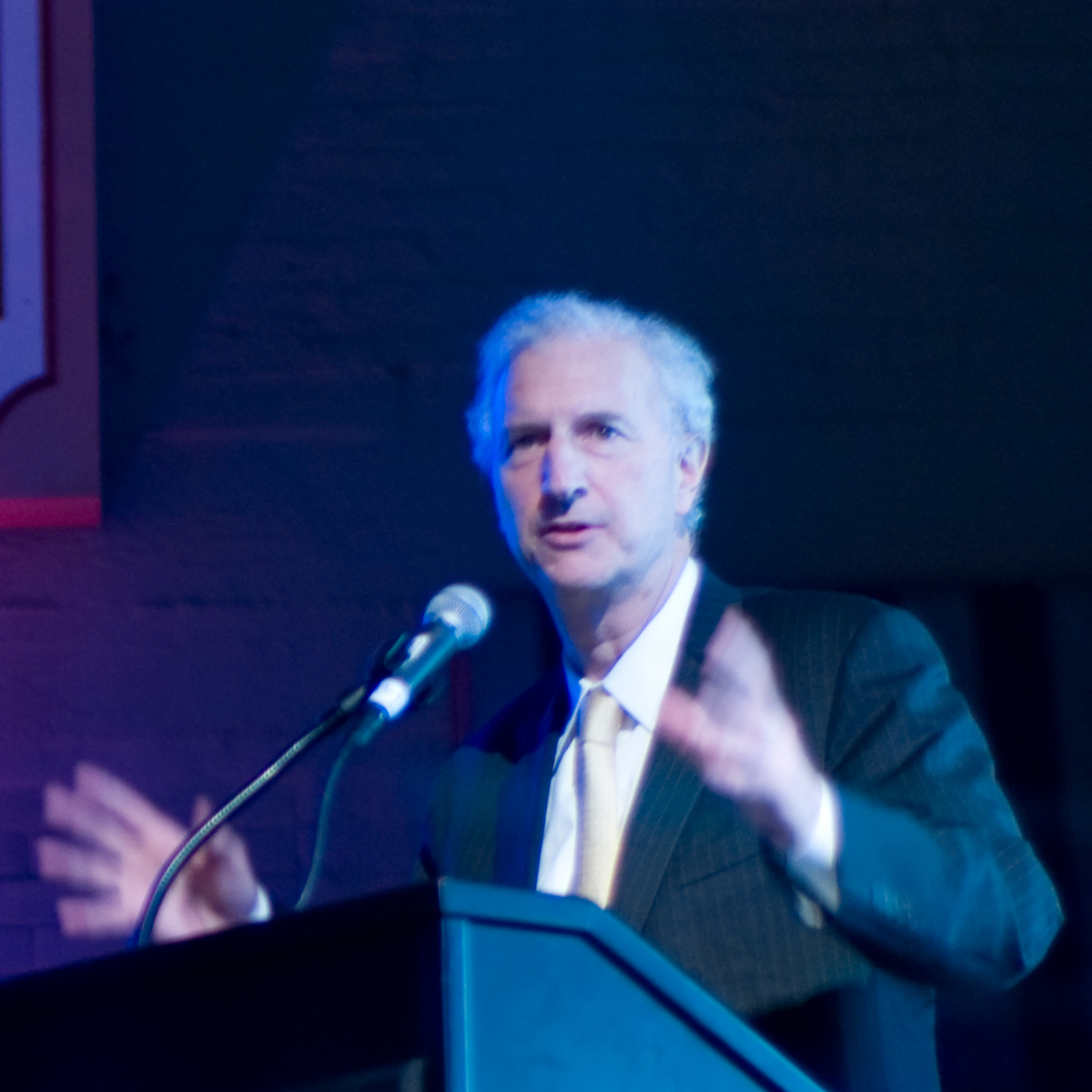 During his college years at , Magaziner was one of the two architects of the "New Curriculum," a liberal academic approach which includes no core requirements aside from the concentration the student pursues. Magaziner excelled academically at Brown and in 1969 was named of his class.

During the 1968 black student walkout at the University, Magaziner held rallies in support of their demands, and as president of the Undergraduate Council of Students, he negotiated with the administration on the terms of their return. His valedictory address at graduation was featured in a 1969 "Time" magazine special on student leaders -- a special which also included a story about a recent graduate, future First Lady and New York Senator . After his address, Magaziner led the students in turning their backs on , who was receiving an honorary degree. Magaziner also organized Brown's "spring weekend" concerts and festivities. Fact|date=December 2007

After Oxford, Magaziner and a group of former Brown students attempted to implement social democratic reforms in the city of . These reforms included starting an agricultural cooperative, supporting liberal candidates for city council, strengthening the union movement, and printing a progressive town newspaper. Magaziner soon abandoned the project, after the group recognized that the effects of foreign business competition on the local manufacturing base would undercut their efforts. Magaziner then determined that a greater understanding of business was necessary to promote broad based social and economic reforms.

Magaziner went on to work for the in Boston, London and Tokyo from 1973 to 1979. He founded in 1979 and built it into a respected international firm with offices in the U.S., France, Japan and Australia. Magaziner sold Telesis in 1986 to Inc. and managed the U.S. strategy practice for Towers Perrin from 1986 to 1989.

In the 1970s, Magaziner was the BCG consultant in charge of creating a national industrial strategy for the country of . This led to the famous "Boston Report," which was generally vilified by Swedish politicians. Two decades later, Magaziner claimed his predictions of rising and declining industries had come to pass almost fully.Fact|date=February 2007

In the early 1980s, Magaziner was the principle author of the "Telesis Report", which laid out a strategy for industrial policy in Ireland. The report ultimately formed the foundation of the economic strategy the Irish government pursued, and Magaziner claims it laid the intellectual groundwork for Ireland's economic successes in the late 1980s and 1990s.Fact|date=February 2007 Emphasis was placed on the use of fiscal policy to attract industries that play to Ireland's strengths. Specifically, in an effort to retain and utilize valuable human capital, Ireland lowered corporate taxes on software firms to attract high-tech job creating industries.

Other consulting ventures included work with , and the car company . During Magaziner's consulting, Volvo switched its emphasis to manufacturing cars for high-end consumers who cared about safety.Fact|date=February 2007

In 1990, Magaziner's last major consulting engagement was with . He proposed that Wang pull out of manufacturing computers altogether, and go into manufacturing software. The plan was never implemented.

Magaziner also had significant influence in Rhode Island. Working alongside Governor , he devised a state economic plan, known as the "Greenhouse Compact", which, upon approval by the voters, aimed to resolve several key economic issues in the state, create several business "incubators," and to stimulate state exports. Opposed by politicians and academic economists, it was overwhelmingly rejected by voters in 1984.

Magaziner has authored two books on business strategy and industrial policy: "Minding America's Business", and "The Silent War". The former, co-authored with future Clinton , laid out a plan for U.S. industrial policy in the late 1970s and early 1980s, and received critical acclaim. Emphasis was placed on eliminating subsidies for inefficient American industries, and applying fiscal policy strategies to stimulate growth in sectors for which the U.S. had "cost-advantage." Foreseeing the decline of the US manufacturing base, the book proposed that 1% of corporate profits be diverted to the training of a high-skilled workforce. The Silent War, co-authored with columnist , tells the story of international business competition in the early 1990s, and Magaziner's experiences in dealing with different countries' relationships to their corporate base.

Magaziner is best known for leading, along with , the failed Task Force to Reform Health Care in the early Clinton administration, which aimed to implement a managed competition regime for the health insurance industry, and to establish community rated insurance pools to cut costs for small businesses and the uninsured. The plan was widely-criticized for being too complex. Pharmaceutical companies and health insurance companies waged a broad-based ad-campaign against the plan, which included the famous "" ads. Despite the attacks by Republicans and industry associations, Magaziner did little to respond. People within the administration criticized Magaziner's blunt and domineering approach, attacking critics who disagreed instead of trying to build consensus. The Democratic congressional staff began calling him "Hillary's "

, Deputy Treasury Secretary for the Clinton administration at the time, argues that Magaziner's failures stemmed from having a background in management consulting instead of policy: "A management consultant's principal goal is to win a debate in front of his employer ... by making intellectual arguments, controlling the flow of information..., [and] walling-off potential adversaries from the process ... You develop a policy by forming a large coalition ... Then you have a large group of people who are enthusiastic about the proposal: they will go out and make your arguments for you."

Despite its political failings, the substance of the Clinton Health Plan has echoes in current reform plans for the US Health System. For instance, almost all of the 2008 Democratic candidates' plans call for employer mandates, cooperative insurance pools, and managed competition between health plans with a minimum benefits package. Of his Health Plan, President Clinton often says that it was politics that undermined Magaziner's efforts, not policy. It should be noted, however, that these are all Democratic endorsements. Most conservatives, and many moderates, still believe less drastic measures are a better approach to increasing coverage while maintaining quality.

Magaziner was court ordered to pay $285,864 to the , [Judge Rules Government Covered Up Lies on Panel, NY Times, December 19, 1997 [http://query.nytimes.com/gst/fullpage.html?res=9405E5DA1E3FF93AA25751C1A961958260] ] in 1997 by a federal judge for lying about whether the Task Force to Reform Health Care hired non-governmental employees, and therefore would be required to release documents from their strategic deliberations upon public request. Under a 1972 Federal law required a task force not be private if it includes non-Government people. The fine, however, was later overturned on appeal on August 25, 1999. [Court Clears Clinton Aide In Lying Case, NY Times, August 25, 1999 [http://query.nytimes.com/gst/fullpage.html?res=990DE7DB1F38F936A1575BC0A96F958260] ]

Following the controversy, Magaziner stayed in the administration and worked to develop an E-Commerce policy initiative with OSTP staff and industry advisors. That initiative evolved to include a facilitative role in the formation the Internet Corporation for Assigned Names and Numbers (), to assume Internet administrative activities previously maintained by the US DARPA. Magaziner's White House office also oversaw the development of policies to increase American exports, and drafted legislation for American involvement in international health, including the development of "compulsory licensing" for developing countries facing health crises. He continues to be part of an Association of American Physicians and Surgeons lawsuit AAPS v. Clinton, over the closed door meetings on health care. [THE UNITED STATES DISTRICT COURT, CIVIL ACTION [http://www.aapsonline.org/judicial/aapsmemo.htm] ]

Magaziner is now the Policy Director and Chairman of the Clinton Foundation Policy Board at the William Jefferson Clinton Foundation. He is the principal architect and manager of the Clinton HIV/AIDS initiative (CHAI), which attempts to cut costs for critical AIDS treatment and diagnostic testing in the developing world, while also improving public health infrastructures in partner countries; the Climate Change Initiative (CCI), which seeks to cut costs for renewable and energy efficient technologies purchased by large global cities; the Childhood Obesity Initiative, which works in partnership with snack food and soft drink companies to deliver healthier foods to school children in the U.S.; and finally, in partnership with Scottish billionaire , the Clinton Hunter Development Initiative (CHDI), which promotes Agricultural Development in several African countries.

Simultaneously, Ira is CEO of SJS advisors, a consulting firm, which currently advises Corning Glass, with whom he worked prior to the Clinton Administration.

The foundation cut the cost of generic AIDS drugs and diagnostic testing equipment by two thirds for citizens in the Foundation's consortium countriesFact|date=February 2007. Recently, the foundation partnered with 's organization, (PIH) to construct large-scale, integrated rural health interventions in Rwanda, Uganda, and Malawi, based upon PIH's rural clinic models in Haiti and Peru. For the foundation, Magaziner also conceived of the Energy Efficient Building Retrofit Program, in which five large banks have offered $5 billion in low interest loans to major construction facilities in 30 of the world's largest cities, which will finance efficiency upgrades in commercial and public building stocks under the guidance of Energy Service Companies. Under Magaziner's leadership at CHDI, agricultural cooperatives in Rwanda now receive low interest loans from banks and have access to green revolution agricultural inputs. As a result of their work, farming communities involved in the cooperative produced surpluses for the first time in years.

Magaziner lives in with his wife Suzanne and children Seth, Jonathan and Sarah.