Wheldon, who was born in Emberton, near Olney, Buckinghamshire, England, took up karting at the age of four with funding from his father. He progressed through the junior ranks of motor racing during his school years. Attending Bedford School until he completed his GCSEs at age 16, he frequently took time off to race. During his early career in open wheel racing, he developed a rivalry with Jenson Button before ultimately leaving the United Kingdom to race in America. The reasoning behind the move was that the level of investment needed to fund his racing career in the UK was beyond his family's resources.[1] Moving to the United States in 1999, he spent several years in lower open-wheeled circuits like the U.S. F2000 Championship Series, [2] the Toyota Atlantic series and the Indy Lights series. 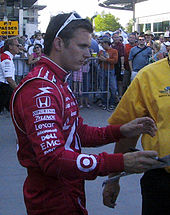 In 2002, Wheldon moved up to the IRL IndyCar Series for two events with Panther Racing as teammate to Sam Hornish, Jr.. The following year Wheldon joined Andretti Green Racing, taking the spot of Michael Andretti following his retirement, and collected league Rookie of the Year honours. In 2004, he won his first IRL race at Twin Ring Motegi in Japan, ultimately finishing as runner-up to teammate Tony Kanaan in the championship with three wins.

He won the 2005 Indianapolis 500, as well as that season's IndyCar Series championship. His six victories in 2005 also broke the record for most victories in one season (under IRL sanction), previously held by Sam Hornish, Jr. with 5. His win at Indy was the first for an Englishman since Graham Hill's victory in 1966. In November 2005, it was announced that he would be driving for Chip Ganassi Racing in the IndyCar Series in 2006. Shortly after his first test with Ganassi, he won the 24 Hours of Daytona endurance sports car race with Ganassi teammates Scott Dixon and Casey Mears.

He began the IndyCar season by beating Hélio Castroneves by 0.0147 seconds at Homestead-Miami, a sombre race due to the earlier death of Paul Dana in a practice session. Wheldon retired at St. Petersburg due to contact with Sam Hornish, Jr. during a caution period. At the end of the 2006 IndyCar season, Wheldon and Hornish were tied for the lead with each driver having 475 points. In the event of a tie, the driver with the most wins for that particular season is declared the champion. Hornish had four wins for the 2006 season to Wheldon's two; therefore Hornish was declared the 2006 IndyCar champion.

During the close season he was offered a place in the BMW Sauber Formula One team, but declined on discovering he would not be assured a regular drive. "I do want to race in F1. When my contract expires with Chip, I'll take a serious look at Formula One."[3] 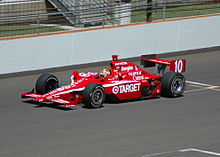 Wheldon practising for the 2007 Indianapolis 500.

Commenting in 2007 on the perception of him as 'difficult', Wheldon said "I put everything into my racing, and I expect the same back. If I see people who aren't giving it I'm not afraid to say so but that sometimes comes out a little brash. That could be improved a little bit."[4]

On 22 June 2008, his 30th birthday, Wheldon took his 15th career victory in the IndyCar Series after winning the 2008 Iowa Corn Indy 250 over Hideki Mutoh and Marco Andretti. He donated his winnings to help the victims of the recent tornadoes and flooding which had occurred in Iowa.[5]

Wheldon was released from his drive at Ganassi on 2 September 2008.[6] He was replaced by Dario Franchitti. "I have enjoyed these last three seasons with Target Chip Ganassi Racing but will be moving on to pursue a very exciting opportunity for 2009," Wheldon said. This would later turn out to be a return to former team Panther Racing.[7] Wheldon drove the Panther car to a second place finish in the 2009 Indianapolis 500, the second Indy 500 runner-up finish in a row for the team. However, his strong start to the season faded and Wheldon failed to crack the Top 10 in 7 of the last 8 races of the year. The following year Wheldon finished second at the 2010 Indianapolis 500. This gave Panther its third straight runner-up finish at Indy. This time, Wheldon remained competitive all year, challenging for wins on the oval tracks.

Wheldon won his second Indianapolis 500 in 2011 in a one-off entry for the Bryan Herta Autosport team.

Despite strong showings in the Panther Racing No. 4 car, Wheldon still failed to win a race during his time with the team. This led to his being replaced at Panther Racing by the young American driver (and 2009 Indy Lights champion) J.R. Hildebrand. Wheldon attempted and won the 2011 Indianapolis 500 with Bryan Herta Autosport after inheriting the lead with metres to go after Hildebrand wrecked going into the final turn trying to get around the decelerating Charlie Kimball with too much velocity, being the first driver in Indy history to win the race by leading a single lap.[8] Wheldon was very emotional after the win, due to his not having a ride for the rest of the season and the news that his mother had recently been diagnosed with Alzheimer's Disease.[9] It was Wheldon's first series win in three seasons.[10]

Over the rest of the 2011 season, Wheldon helped IndyCar and Dallara test the new IndyCar chassis that was to debut in 2012.[11]

In 2008, Wheldon married his long-time personal assistant, Susie Behm, originally from Armstrong, British Columbia, Canada.[12] They had two sons, one of whom was born in February 2009, and the other born in March 2011.[13] They lived in St. Petersburg, Florida.[14]

At the 2011 IZOD IndyCar World Championship at Las Vegas Motor Speedway on 16 October 2011, Wheldon was involved in a 15–car accident during lap 11 of the race, in which Wheldon's car flew into the catch fence before landing back on the track.[15] The carnage and ensuing debris field resulted in race officials throwing a red flag almost instantly.[16][17][18] Wheldon was extricated from his car by the Holmatro Safety Team and their Las Vegas–based colleagues and was airlifted to a local hospital with what were described as "unsurvivable injuries."[19] He succumbed to his injuries and was pronounced dead at 1:54 PDT.[20] He was 33 years old.[21][22]

The IndyCar officials and drivers determined after vote and input from drivers and team owners that the race would be abandoned, and that a five–lap, three–car–wide formation salute would be held in Wheldon's honor, with his number 77 being displayed alone at the top of the scoring pylon.[18] He had been the only driver participating in Go Daddy's IndyCar Challenge where he and a randomly selected fan, would have been eligible for $2.5 million each if he won the race, starting from last place.[23][24]

An autopsy conducted on 17 October concluded that Wheldon died of blunt force trauma to the head.[25]

After Wheldon's death, Michael Andretti revealed that Wheldon had officially signed with Andretti Autosport on the morning of 16 October for a multi–year deal to replace driver Danica Patrick starting in the 2012 season. [26] Andretti Autosport, previously known as Andretti Green Racing, was the team with which Wheldon won the 2005 Indianapolis 500 and IndyCar Series Drivers' Championship.

On 18 October, Italian manufacturer Dallara Automobili confirmed that the 2012 series car would be named after Wheldon in honor of his work testing the car. The name of the car was later officially announced to be the Dallara DW12.[27] Wheldon was also honoured by the V8 Supercars series, in which he had been set to contest the annual Gold Coast 600 the week following Las Vegas. The championship announced that the award presented to the top international driver at the event would subsequently be known as the "Dan Wheldon International Driver Trophy" in honour of the Englishman. [28]

Dan Wheldon was a guest star in the voice cast for the TV series Hot Wheels Battle Force 5.[30]

On 9 August 2011, Ignite Game Technologies announced that Wheldon would assist the physics development for its online auto racing game, Simraceway. Wheldon commented "It was pretty obvious that Ignite was not looking to build just another racing game, so the opportunity to influence Simraceway's physics directly was pretty appealing."[31] It later emerged Wheldon would also be playing a role in the company’s performance driving center at Infineon Raceway.

a Wheldon lost the title on the tiebreaker – he won only two races compared to Sam Hornish, Jr.'s four after the two tied on 475 points
1 Run on same day
2 Non-points race
3 Event canceled after a 15-car incident on Lap 11 involving Wheldon, who would later succumb to injuries sustained in the accident.