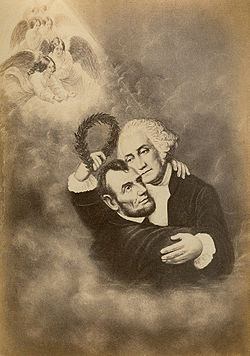 The Apotheosis of Abraham Lincoln, greeted by George Washington in heaven (an 1860s work)

Statues of Abraham Lincoln and other tributes

Statues of Lincoln can be found in other countries. In Ciudad Juárez, Chihuahua, Mexico, is a 13-foot (4 m) high bronze statue, a gift from the United States, dedicated in 1966 by President Lyndon B. Johnson. The U.S. received a statue of Benito Juárez in exchange, which is in Washington, D.C. Juárez and Lincoln exchanged friendly letters during the American Civil War, Mexico remembers Lincoln's opposition to the Mexican-American War. (For his part, Juárez refused to aide the Confederacy and jailed those Confederates who sought his help.) There is also a statue in Tijuana, Mexico, showing Lincoln standing and destroying the chains of slavery. There are at least three statues of Lincoln in the United Kingdom — one in Parliament Square in London by Augustus St. Gaudens, one in Manchester by George Grey Barnard and another in Edinburgh by George Bissell. There is also a bust of the President at St Andrews Church in Hingham, Norfolk, where Lincoln's ancestors lived. In Havana, Cuba, there is a bust of Abraham Lincoln in the Museum of the Revolution, a small statue of him in front of the Abraham Lincoln School, and a bust of him near the Capitolio.

In Jules Verne's 1870 novel, Twenty Thousand Leagues Under the Sea, a fictitious steam frigate, the Abraham Lincoln, is sent to hunt down the "monster" that has been attacking ships at sea, and is attacked itself. Captain Nemo also has a portrait of Lincoln hanging in his study onboard the Nautilus. In the prequel The Mysterious Island, the five shipwrecked Union prisoners name the island which they discover, "Lincoln Island".

The first known motion picture based on Mr. Lincoln was 1908 film The Reprieve: An Episode in the Life of Abraham Lincoln. Directed by Van Dyke Brooke, the film shows Lincoln pardoning a sentry who fell asleep on duty, a theme that would be depicted repeatedly in other silent era shorts. This era is also when the first Abraham Lincoln impersonators originated, and the modern idea of what he sounded like is derived from these, much like the oral traditions of african folklore.

As with the first picture on Lincoln, most of the films in this decade featured Lincoln pardoning sleeping sentries. Films included Abraham Lincoln's Clemency (1910), When Lincoln Was President (1913), When Lincoln Paid (1913), The Sleeping Sentinel (1914) and The Birth of a Nation (1915).

John Drinkwater's play, Abraham Lincoln (1918), was successful on both sides of the Atlantic, reaching Broadway and the West End. Drinkwater was an English poet and playwright.

In 2001, Steven Spielberg acquired the rights to Doris Kearns Goodwin's biography of Lincoln, Team of Rivals: The Political Genius of Abraham Lincoln in order to base a film on it.[4] John Logan was hired to write the script, and playwright Paul Webb and Tony Kushner rewrote it.[5] Liam Neeson was cast as Abraham Lincoln in January 2005,[4] while Sally Field was cast as Mary Todd Lincoln in September 2007.[6] As part of his preparation for the role, Neeson read twenty-two books about the president, as well as his personal writings. He also visited Ford's Theatre, where Lincoln was assassinated.[7] However, in July 2010, Neeson left the project, saying that he was 'too old to play the former commander-in-chief'.[8] In November 2010, it was announced that Daniel Day-Lewis was cast in the role.[9] Filming began in the fall of 2011 for expected release in the fourth quarter of 2012 through Disney’s Touchstone distribution label.[10]