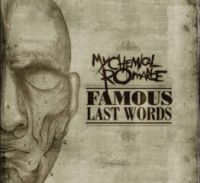 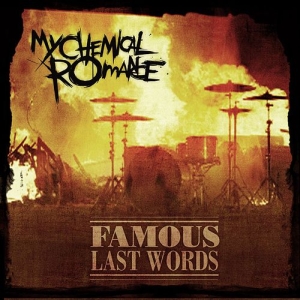 "Famous Last Words" is the second single and thirteenth track from 's third studio album, "". It was released on , . It is also the band's ninth overall single. The music video premiered on , on and on , on the program, and on in . The video was officially premiered in the on the episode of "", and debuted on the countdown the following Tuesday at #5, the band's highest "TRL" debut for a video. It went onto become their third #1 video on the countdown (following "Helena" and ""). On , the video retired at #5 on "TRL". On , , they performed this song on "" with .

In the United Kingdom and other territories, the single was released as a two-part square shaped vinyl picture disc. Part one came in a gatefold stickered clear sleeve, with a space to 'slot' part two into.

The music videos for "" and "Famous Last Words" were filmed back to back. Both were filmed in , California. Originally, MCR dubbed the second video as a "secret" that they couldn't reveal yet. It was later announced that the "secret" second video from the new My Chemical Romance album "" would be "Famous Last Words", directed by , the same director that worked on "". When the video was being filmed, the band still hadn't decided on the song title. This is the video that caused vocalist and drummer to sustain severe injuries. Bryar received a 3rd degree burn to the leg which subsequently turned into a staph infection, and Way tore all of the in his foot when got spooked by the bursting flames and tackled Gerard when Gerard was kneeling on the floor. The aftermath of these injuries forced the band to cancel a handful of their 2006 dates.

The song was recently used for a commercial 's upcoming season.The song was featured in a downloadable track pack for the version of "", along with "Teenagers" and "This Is How I Disappear".

"Famous Last Words" debuted at #68 on the on downloads alone on , . It was physically released as a single on . It climbed to #38 in its second week, still on downloads. "Famous Last Words" is My Chemical Romance's second Top 10 hit in the UK, so far reaching #8, but the song has already reached #1 on the UK Physical chart. On , , the video for "Famous Last Words" reached the #1 spot on "TRL" after a seven day climb to the top from their debut at #5. [ [http://www.popfusion.net/records/recaparchive/2007_01.html TRL Archive - January 2007] , Popfusion.net.] In early February, the song debuted on the U.S. at number 93 before reaching its peak at number 88." [Katie Hasty, [http://www.billboard.com/bbcom/news/article_display.jsp?vnu_content_id=1003540636 "Beyonce Stays Ahead Of Fall Out Boy Atop Hot 100"] , Billboard.com, February 1, 2007.]

The [http://youtube.com/watch?v=8bbTtPL1jRs music video] shows the Black Parade float that were performing on in "" burning, while looking like it has been through a substantial amount of wear and tear. The rest of the background is scattered with burning props from the video of "Welcome to the Black Parade", and fire is seen all around. All of the followers of The Black Parade have abandoned the band, and the band seems to be in a desperate state. looks particularly rough, and he appears to look like he is dying or is very ill because of the make up he is wearing, especially around his eyes. This make-up is similar to that worn by "The Patient" in the "Welcome to the Black Parade" video, albeit without the hospital gown. He also adopts a wide eyed, insane-looking facial expression. In some parts of the video, he can be seen wearing a skull-designed mask. The band's 'condition' gets worse as the song goes on until the band revert to thrashing around in the dirt while performing. Although this video was a fairly basic concept compared to past videos, it is regarded by fans as by far the darkest video the band has created. In an interview for the music video, says that it was written at "the darkest period in this band's career."A shortened edit of the song is used in the video with one bridge and two chorus repeats removed. The instrumentals at the end of the song are continued in the video with a sustained guitar chord accompanying the last few vocal lines, whereas, in the album version, they were faded out by engineer until only lead singer 's voice can be heard. At the end of the video, the float from the "" is seen burning.

The video premiered in the on "" on , . On , , the video reached the #1 spot on "TRL", and spent nine days at the top of the countdown, before becoming the band's first video to retire on the countdown, on , . The U.S. version of the video is mostly the same as the version first seen in the UK, the only difference being that it completely cuts out Bryar's incident with the heat at the end of the video. This version has started to air on British television, or at least on the music channel Scuzz TV, and . The video has also been viewed more than 43 million times on YouTube. As of th, it is the fouth most-viewed clip in the "music" section (behind such videos as "Girlfriend", by and the band's video for "Teenagers"), and the 7th most-viewed clip on the entire site.

In an interview with "", singer Gerard Way was quoted as saying, "At first I thought [the patient died] , but the more I think about it, the more I think he's not dead. Maybe this is all in his head. Maybe he can fight. Now I think he has a choice to live."Fact|date=February 2007 The song's meaning is generally open to interpretation, as said before, because its lyrics never really tell one way or the other whether the patient dies. Ray Toro (the guitarist) said this is his favorite song on the album because it leaves you with a little hope.

When fans protested against 'unfair portayal of the band and genre' by in 2008, they quoted the lyrics 'I'm not afraid to keep on living, I'm not afraid to walk this world alone!' as an argument. Their reasons for this were: 'It shows they (My Chemical Romance) do not glamorise death, but try to keep you going through tough times'. has often agreed with this interpretation when asked about the topic.