Chinese as a foreign language

Chinese as a foreign or second language is the study of the Chinese languages by non-native speakers. Increased interest in China from those outside has led to a corresponding interest in the study of Standard Chinese as a foreign language, the official languages of mainland China and Taiwan. However the teaching of Chinese both within and outside China is not a recent phenomenon. Westerners started learning different Chinese languages in the 16th century. Within China, Mandarin became the official language of China in 1924. Mandarin also became the official language of Taiwan after the Kuomintang took over control from Japan after World War II.

In 2005, 117,660 non-native speakers took the Chinese Proficiency Test, an increase of 26.52% from 2004.[1] From 2000 to 2004, the number of students in England, Wales and Northern Ireland taking Advanced Level exams in Chinese increased by 57%.[2] An independent school in the UK made Chinese one of their compulsory subjects for study in 2006.[3] Chinese language study is also rising in the United States. The USC U.S.-China Institute cited a report that 51,582 students were studying the language in US colleges and universities. While far behind the more than 800,000 students who study Spanish, the number is more than three times higher than in 1986. The Institute's report includes graphs and details on the popularity of other languages.[4]

China has helped 60,000 teachers promote its language internationally, and an estimated 40 million people are now studying Chinese as a second language around the world.[5]

Other than Mandarin, Cantonese is also offered in Hong Kong and in some oversea Universities, especially in UK and North America.[6] 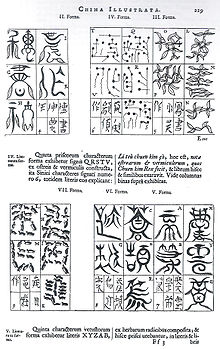 The fanciful Chinese scripts shown in Kircher's China Illustrata (1667). Kircher divides Chinese characters into 16 types, and argues that each type originates from a type of images taken from the natural world

The understanding of the Chinese language in the West began with some misunderstandings. Since the earliest appearance of Chinese characters in the West,[7] the belief that written Chinese was ideographic prevailed.[8] Such a belief led to Athanasius Kircher's conjecture that Chinese characters were derived from the Egyptian hieroglyphs, China being a colony of Egypt.[9] John Webb, the British architect, went a step further. In a Biblical vein similar to Kircher's, he tried to demonstrate that Chinese was the Primitive or Adamic language. In his An Historical Essay Endeavoring a Probability That the Language of the Empire of China Is the Primitive Language (1669), he suggested that Chinese was the language spoken before the confusion of tongues.[10]

Inspired by these ideas, Leibniz and Bacon, among others, dreamt of inventing a characteristica universalis modelled on Chinese.[11] Thus wrote Bacon:

The serious study of the language in the West began with the missionaries coming to China during the late 16th century. Among the first were the Italian Jesuits Michele Ruggieri and Matteo Ricci. They mastered the language without the aid of any grammar books or dictionaries, and are often viewed as the first Western sinologists. The former set up a school in Macau, the first school for teaching foreigners Chinese, translated part of the Great Learning into Latin, the first translation of a Confucius classic in any European language, and wrote a religious tract in Chinese, the first Chinese book written by a Westerner. The latter brought Western sciences to China, and became a prolific Chinese writer. With his amazing command of the language, Ricci impressed the Chinese literati and was accepted as one of them, much to the advantage of his missionary work. Several scientific works he authored or co-authored were collected in Siku Quanshu, the imperial collection of Chinese classics; some of his religious works were listed in the collection's bibliography, but not collected. 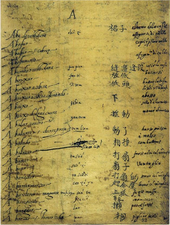 Page from the Portuguese-Chinese dictionary manuscript by Ricci, Ruggieri, and Fernandez (1583-88)

Ricci and Ruggieri, with the help of the Chinese Jesuit Lay Brother Sebastiano Fernandez (also spelled Fernandes; 1562–1621), are thought to have created the first Portuguese-Chinese dictionary some time during 1583-88.[14][15] Later, while travelling on the Grand Canal of China from Beijing to Linqing during the winter of 1598, Ricci, with the help of Lazzaro Cattaneo (1560–1640) and Sebastiano Fernandez, compiled a Chinese-Portuguese dictionary as well. In this latter work, thanks to Cattaneo's musical ear, a system was introduced for marking tones of the romanized Chinese syllables with diacritical marks. The distinction between aspirated and unaspirated consonants was made clear as well (by means of apostrophes, as in much later Wade-Giles system). Although neither of the two dictionaries were published (the former only was found in Vatican archives in 1934, and published in 2001, and the later has not been found so far), Riicci made the transcription system developed in 1598, and in 1626 it was finally published, with minor modifications, by another Jesuit Nicolas Trigault in a guide for new Jesuit missionaries. The system continued to be in wide use throughout the 17th and 18th century. It can be seen e.g. in several Romanized Chinese texts (prepared mostly by Michael Boym and his Chinese collaborators) that appeared in Athanasius Kircher's China Illustrata.[14][16] [17] 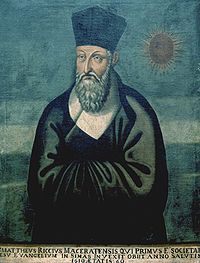 Matteo Ricci, one of the first Westerners to learn the Chinese language

The earliest Chinese grammars were produced by the Spanish Dominican missionaries. The earliest surviving one is by Francisco Varo (1627–1687). His Arte de la Lengua Mandarina was published in Canton in 1703.[18] This grammar was only sketchy, however. The first important Chinese grammar was Joseph Henri Marie de Prémare's Notitia linguae sinicae, completed in 1729 but only published in Malacca in 1831. Other important grammar texts followed, from Jean-Pierre Abel-Rémusat's Élémens (sic) de la grammaire chinoise in 1822 to Georg von der Gabelentz's Chinesische Grammatik in 1881. Glossaries for Chinese circulated among the missionaries from early on. Robert Morrison's A Dictionary of the Chinese Language, noted for its fine printing, is one of the first important Chinese dictionaries for the use of Westerners.

In 1814, a chair of Chinese and Manchu was founded at the Collège de France, and Abel-Rémusat became the first Professor of Chinese in Europe. In 1837, Nikita Bichurin opened the first European Chinese-language school in the Russian Empire. Since then sinology became an academic discipline in the West, with the secular sinologists outnumbering the missionary ones. Some of the big names in the history of linguistics took up the study of Chinese. Sir William Jones dabbled in it;[19] instigated by Abel-Rémusat, Wilhelm von Humboldt studied the language seriously, and discussed it in several letters with the French professor.[20]

The teaching of Chinese as a foreign language started in the People's Republic of China in 1950 at Tsinghua University, initially serving students from Eastern Europe. Starting with Bulgaria in 1952, China also dispatched Chinese teachers abroad, and by the early 1960s had sent teachers afar as Congo,[disambiguation needed

] Cambodia, Yemen and France. In 1962, with the approval of the State Council, the Higher Preparatory School for Foreign Students was set up, later renamed to the Beijing Language and Culture University. The programs were disrupted for several years during the Cultural Revolution.

According to the Chinese Ministry of Education, there are 330 institutions teaching Chinese as a foreign language, receiving about 40,000 foreign students. In addition, there are almost 5,000 Chinese language teachers. Since 1992 the State Education Commission has managed a Chinese language proficiency exam program, which has tested over 142,000 persons.[21]

Chinese is rated as one of the most difficult languages to learn for people whose native language is English, together with Arabic, Japanese and Korean.[22] A quote attributed to William Milne, Morrison's colleague, goes that learning Chinese is

In Gautier's novella Fortunio, a Chinese professor from the Collège de France, when asked by the protagonist to translate a love letter suspected to be written in Chinese, replied that the characters in the letter happen to all belong to that half of the 40,000 characters which he has yet to master.[25]

Mandarin Chinese has four tones (simplified Chinese: 声调; traditional Chinese: 聲調; pinyin: shēngdiào), namely the first tone (flat or high level tone, 阴平, denoted by " ¯ " in Pinyin), the second tone (rising or high-rising tone, 阳平, denoted by " ˊ " in Pinyin), the third tone (falling-rising or low tone, 上声, denoted by " ˇ " in Pinyin), and the fourth tone (falling or high-falling tone, 去声, denoted by " ˋ " in Pinyin). Indeed, there is a fifth tone called neutral (轻声，denoted as no-mark in Pinyin) although the official name of the tones is Four Tones. Other Chinese dialects have more, for example, Cantonese has six (not nine: the other three are not "tones" in the English sense of the word). In most Western languages, tones are only used to express emphasis or emotion, not to distinguish meanings as in Chinese. (A notable exception is Norwegian, which has two tones that differentiate meaning, for instance "bønner" (beans or prayers) and "bønder" (farmers), both being pronounced the same, except for the use of tones.) A French Jesuit, in a letter, relates how the Chinese tones cause a problem for understanding:

Standard Chinese has a large number of homophones (Chinese: 同音字; pinyin: tóngyīnzì). For example, the pronunciation shì is associated with over 30 distinct morphemes, including 是 (copula), 市 (city), 事 (business, matter), 试 (try, attempt), 室 (room), and 视 (to see, sight). When homophones are encountered, the Chinese script helps distinguish between the different meanings, while homophones of other languages written with an alphabet or syllabary looks often the same. This is an advantage of the Chinese script, that it conveys meaning as well as (to a limited extent) sound.

Chinese courses have been blooming internationally since 2000 at every level of education.[27] Still, in most of the Western universities, the study of the Chinese language is only a part of Chinese Studies or sinology, instead of an independent discipline. The teaching of Chinese as a foreign language is known as (simplified Chinese: 对外汉语教学; traditional Chinese: 對外漢語教學; pinyin: Duìwài Hànyǔ Jiāoxué). The Confucius Institute, supervised by Hanban (the National Office For Teaching Chinese as a Foreign Language), is responsible for promoting the Chinese language in the West and other parts of the world. Hanban runs a Confucius Institute Online(http://www.chinese.cn) offering over 10,000 Chinese language learning resources.

The People's Republic of China began to accept foreign students from the communist countries (in Eastern Europe, Asia and Africa) from the 1950s onwards. Foreign students were forced to leave the PRC during the Cultural Revolution. Taiwan has long been a place for students to study Mandarin.[28] Today's popular choices for the Westerners who want to study Chinese abroad include the Beijing Language and Culture University in Beijing and the Mandarin Training Center (MTC) and International Chinese Language Program (ICLP, formerly the Stanford Center) in Taiwan. The latter was especially popular before the 1980s when mainland China had yet to open to the other parts of the world.