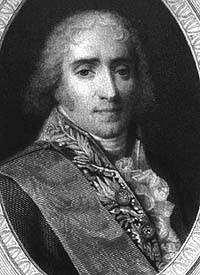 Born at (), he received a solid education, and then entered the legal profession - becoming a at the King's Council in . The ideas of the profoundly influenced him, and wholly altered his career. The interest aroused by the debates of the first National Assembly suggested to him the idea of publishing them in the "Bulletin de l'Assemblée". The journalist (1736-1798), owner of the "" and publisher of the famous "" (1785), persuaded him to merge this in a larger paper, the "", which gained a wide repute for correctness and impartiality.

He was a member of the moderate club, the , but, after the overthrow of the monarchy on with the insurrection of August 10, 1792 he accepted an office in the Ministry of Foreign Affairs, where he sometimes exercised a steadying influence. On the withdrawal of the British , Maret went on a mission to , where he had a favourable interview with on 22 December 1792 - all hope of an accommodation was, however, in vain. After the execution of Bourbon King Louis XVI (21 January 1793), the chief French diplomatic agent, , was ordered to leave Britain, while the declared war (1 February 1793 - "see "). These events limited the impact of a second mission of Maret to London in January.

Envoy of the Republic

After a space in which he held no diplomatic post, he became of the French Republic in the ; but, while negotiating with Charles de Simonville he was captured by the and was kept for some thirty months, until, at the close of 1795, the two were set free in return for the liberation of , the daughter of king Louis XVI.

For a time Maret returned to journalism, but he played a useful part in the negotiations for a peace with Britain which went on at during the summer of 1797, until the victory of the in Paris in the "" of 18 Fructidor (September 1797) frustrated the hopes of Pitt for peace and inflicted on Maret another reverse of fortune. On Napoleon Bonaparte's in 1799, Maret joined the general's party which came to power with the 18 Brumaire Coup (9 November–10).

Maret now became one of Napoleon's secretaries and shortly afterwards Secretary of State. An experienced politician, he rendered services of major value to the and .

The "Moniteur", which became the official journal of the state in 1800, was placed under his control. He sometimes succeeded in toning down the hard, abrupt language of Napoleon's communications, and in every way proved a useful intermediary. It is known that he had a share in the drawing up of the new s for the Batavian and Italian Republics.

In 1804 he became Minister; in 1807 he was named , and in 1809 he received the title of "Duc de Bassano", one of the titles with the status of "duché grand-fief" in Napoleon's Kingdom of Italy, a rare hereditary honor (extinguished in 1906) which gives an insight into the respect his work had received from the emperor. He was extremely devoted to Napoleon, as shown by his work to make pass into law the artifices adopted by the latter in April-May 1808 in order to make himself master of the destinies of ("see "). Maret also assisted in drawing up the , which was rejected by almost all Spanish subjects. He accompanied Napoleon through most of his campaigns, including that of 1809 against the , and he expressed himself in favour of the marriage alliance with the Archduchess Marie Louise of Austria, which took place in 1810. In the spring of 1811, the Duc de Bassano replaced Jean-Baptiste Champagny, as Minister of Foreign Affairs. In this capacity he showed his usual ability and devotion, concluding the treaties between France and Austria and France and , which preceded the French invasion of Russia in 1812. He was with Napoleon through the greater part of that campaign, and after the major defeat, helped to prepare the new forces with which Napoleon waged the equally unsuccessful campaign of 1813 against the .

End of the Empire, exile, and return

However, in November 1813, Napoleon replaced him with Armand Augustin Louis Caulaincourt, who was thought to be more devoted to the cause of peace and personally grateful to the Emperor Alexander I of Russia. Maret, however, as private secretary of Napoleon, remained with him through the campaign of 1814, as well as during that of 1815 and the .

After the full , Maret was exiled, and retired to , where he occupied himself with literary work. In 1820 he was allowed to return to France, and after the of 1830, the new king Louis-Philippe made him Peer of France; he also held two high offices for a few days.