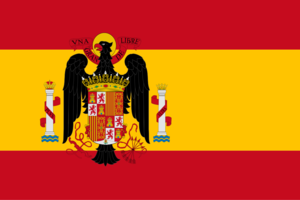 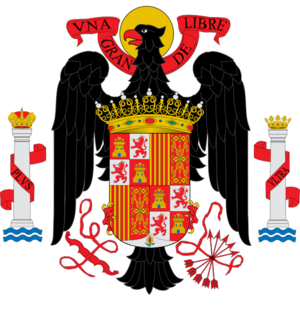 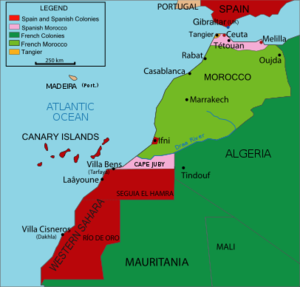 Spanish Sahara was the name used for the modern territory of when it was ruled as a territory by between 1884 and 1975.

In 1884, Spain was awarded the coastal area of present-day Western Sahara at the , and began establishing trading posts and a military presence. In the summer of , under the sponsorship of the Spanish Society of Commercial Geography ("Sociedad Española de Geografía Comercial"), , (1823-1908), and (1853-1894) traversed the colony of , where they made and astronomical observations in a land whose features were barely known at the time to geographers. It is considered the first scientific expedition in that part of the . [http://www.sge.org/sge03/conferencias.asp]

The borders of the area were not clearly defined until treaties between Spain and in the early 20th century. Spanish Sahara was then created from the Spanish territories of and in 1924. It was not part of, and administered separately from, the areas known as .

Entering the territory in , Spain was immediately challenged by stiff resistance from the indigenous tribes. A 1904 led by the powerful -based , , was put down by France in 1910, but it was followed by a wave of uprisings under Ma al-Aynayn’s sons, grandsons and other political leaders.

Because of this, Spain proved unable to extend control to the interior parts of the country until 1934. At its accession to independence in 1956, Morocco laid claim on Spanish Sahara as part of its pre-colonial territory, and in 1957, the Moroccan nearly expelled the Spanish from the country in the . The Spanish were only able to re-establish control with the assistance of the French by 1958, and embarked on a harsh of retaliation towards the countryside, forcibly settling many of the previously ic s of Spanish Sahara and speeding up , while many others were forced into exile to Morocco proper. In the same year, Spain returned the provinces of Tarfaya and Tantan to Morocco.

In the 1960s, Morocco continued to claim Spanish Sahara and succeeded in getting it to be listed on the list of territories to be decolonized. In 1969, Spain returned to Morocco the region of Ifni, that served as the seat of the Spanish administration of Spanish Sahara. In 1967, the Spanish was further challenged by a peaceful protest movement, the , which demanded the end of occupation. After its violent suppression in the 1970 , Sahrawi reverted to its militant origins, with the 1973 formation of the . The Front’s guerrilla army grew rapidly, and Spain had lost effective control over most of the countryside in early 1975. An attempt at sapping the strength of Polisario by creating a modern political rival to it, the (PUNS), met with little success.

Spain proceeded to co-opt tribal leaders by setting up the Djema’a, a political institution (very) loosely based on traditional Sahrawi tribal leaderships. The Djema’a members were hand-picked by the authorities, but given privileges in return for rubber-stamping Madrid’s decisionsFact|date=February 2007.

Immediately before the death of the aging Spanish , , in the winter of 1975, however, Spain was confronted with an intensive campaign of territorial demands from , and to a lesser extent , culminating in the . Spain then withdrew its forces and settlers from the territory, after negotiating a tripartite agreement with Morocco and Mauritania in 1975, by which both took control of the region. Mauritania later surrendered its claim after fighting an unsuccessful war against the Polisario. Morocco engaged in a war with the Algeria-backed Polisario Front, although a cease-fire came into effect in 1991, and the territory remains under dispute.

The considers the former Spanish Sahara a non-decolonized territory, with Spain as the formal administrative power. UN peace efforts have aimed at the organization of a on independence among the Sahrawi population, but this has not yet taken place. The and at least 44 governments consider the territory a sovereign, albeit occupied, state under the (SADR), with an exile government backed by the .