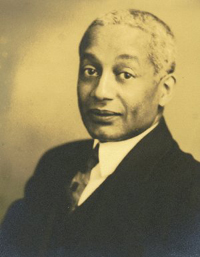 Alain LeRoy Locke (, &ndash; , ) was an American , , , and patron of the arts. He is best known for his writings on and about the . He is unofficially called the "Father of the Harlem Renaissance." His philosophy served as a strong motivating force in keeping the energy and passion of the Movement at the forefront. [cite web | author=Goldsmith, James | title=Alain Locke | work=Planet Bahá'í | url=http://www.planetbahai.org/cgi-bin/articles.pl?article=172 | accessdate=October 25 | accessyear=2006 ]

Alain Locke was born in on , to Pliny Locke (1850-1892) and Mary Hawkins Locke (1853 - 1922). He gave his year of birth as "1886," and many sources give the wrong year. He was, however, born in 1885; it is not clear why exactly he changed the year. In 1902, he graduated from Central High School in Philadelphia, second in his class. He also attended [ [http://www.pabook.libraries.psu.edu/LitMap/bios/Locke__Alain_Leroy.html Alain Leroy Locke ] ] . In 1907, Locke graduated from with degrees in English and . He was the first African American Rhodes Scholar. He formed part of the society. Locke was denied admission to several Oxford colleges because of his skin color before finally being admitted to , where he studied literature, philosophy, Greek, and Latin, from 1907-1910. In 1910, he attended the , where he studied philosophy. Locke attended the in Paris in 1911.

Locke received an assistant professorship in English at , in Washington, D.C. There he interacted with and , who helped develop his philosophy.

Locke returned to Harvard in 1916 to work on his doctoral dissertation, "The Problem of Classification in the Theory of Value". In his thesis, he discusses the causes of opinions and social biases, and that these are not objectively true or false, and therefore not universal. Locke received his Ph.D. in philosophy in 1918. Locke returned to Howard University as the chair of the department of philosophy, a position he held until his retirement in 1953. At Howard, he became a distinguished member of Fraternity, Inc.

Locke promoted African American artists, writers, and musicians, encouraging them to look to Africa as an inspiration for their works. He encouraged them to depict African and African American subjects, and to draw on their history for subject material. Locke edited the March 1925 issue of the periodical "", a special on Harlem and the Harlem Renaissance, which helped educate white readers about the flourishing culture there. Later that year, he expanded the issue into "", a collection of writings by African Americans, which would become one of his best known works. His philosophy of the New Negro was grounded in the concept of race-building. Its most important component is overall awareness of the potential black equality; No longer would blacks allow themselves to adjust themselves or comply with unreasonable white requests. This idea was based on self-confidence and political awareness. Although in the past the laws regarding equality had been ignored without concequence, Locke's philosophical idea of allowed for real fair treatment. Because this was just an idea and not an actual bylaw, its power was held in the people. If they wanted this idea to flourish, they were the ones who would need to "enforce" it through their actions and overall points of view. Locke has been said to have greatly influenced and encouraged .

In addition to the books listed below, Locke edited the "Bronze Booklet" series, a set of eight volumes published by in the 1930s. He also reviewed literature written by African Americans in journals such as "" and "".

Locke was a member of the and declared his belief in in 1918. It was common to write to to declare one's new faith, and Locke received a letter, or "tablet", from `Abdu'l-Bahá in return. When `Abdu'l-Bahá died in 1921, Locke enjoyed a close relationship with , the Guardian of the Bahá'í Faith. Although we do not know how much of his philosophy was influenced by the Bahá'í Faith, one can certainly see many similarities and themes that they share. Shoghi Effendi is reported to have said to Locke, "People as you, Mr. Gregory, Dr. Esslemont and some other dear souls are as rare as diamond." [ [http://books.google.com/books?id=JR_DF2MRlsIC&pg=PA64&lpg=PA64&dq=&source=web&ots=L6IFfArY73&sig=wcv1_h0nNIeHUhi1A79qjTavf9k#PPA64,M1 Alain Lock - Faith and Philosophy] , by Dr. Christopher Buck, Studies in Bábí and Bahá'í Religions, Vol 18, Anthony E. Lee General Editor, p.64 - ISBN 9781890688387]