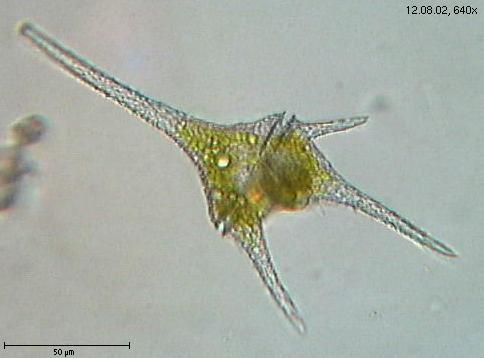 DinoflagellataThe alveolates ("with cavities") are a major line of s. There are three phyla, which are very divergent in form, but are now known to be close relatives based on various ultrastructural and genetic similarities:
*s, very common protozoa, with many short cilia arranged in rows
*, parasitic protozoa that lack locomotive structures except in s
*s, mostly marine s, many of which have s

The most notable shared characteristic is the presence of cortical alveoli, flattened vesicles packed into a continuous layer supporting the membrane, typically forming a flexible pellicle. In dinoflagellates they often form armor plates. Alveolates have mitochondria with tubular cristae, and their flagella or cilia have a distinct structure.

The Apicomplexa and dinoflagellates may be more closely related to each other than to the ciliates. Both have plastids, and most share a bundle or cone of s at the top of the cell. In apicomplexans this forms part of a complex used to enter host cells, while in some colorless dinoflagellates it forms a peduncle used to ingest prey. Various other genera are closely related to these two groups, mostly flagellates with a similar apical structure. These include free-living members in "Oxyrrhis" and "Colponema", and parasites in "Perkinsus", "Parvilucifera", "Rastrimonas", and the s. In 2001, direct amplification of the gene in marine samples revealed the presence of two novel alveolate linages, called group I and II [López-García, P. "et al." (2001). Unexpected diversity of small eukaryotes in deep-sea Antarctic plankton. "Nature" 409: 603-7.] [Moon-van der Staay, S. Y. "et al." (2001). Oceanic 18S rDNA sequences from picoplankton reveal unsuspected eukaryotic diversity. "Nature" 409: 607-10.] . Group I has no cultivated relatives, while group II is related to the dinoflagellate parasite "", which was classified until now in the dinoflagellate order.

Relationships between some of these the major groups were suggested during the 1980s, and between all three by Cavalier-Smith, who introduced the formal name Alveolata in 1991 [Cavalier-Smith, T. (1991). Cell diversification in heterotrophic flagellates. In The Biology of Free-living Heterotrophic Flagellates, ed. D.J. Patterson & J. Larsen. pp. 113-131. Oxford University Press.] . They were confirmed by a genetic study by Gajadhar "et al." [cite journal | author = Gajadhar, A. A. "et al."
title = Ribosomal RNA sequences of "Sarcocystis muris", "Theilera annulata", and "Crypthecodinium cohnii" reveal evolutionary relationships among apicomplexans, dinoflagellates, and ciliates
journal = Molecular and Biochemical Parasitology
year = 1991 | volume = 45 | pages = 147–153 | doi = 10.1016/0166-6851(91)90036-6] Some studies suggested the haplosporids, mostly parasites of marine invertebrates, might belong here but they lack alveoli and are now placed among the .

The development of plastids among the alveolates is uncertain. Cavalier-Smith proposed the alveolates developed from a chloroplast-containing ancestor, which also gave rise to the (the hypothesis). However, as plastids only appear in relatively advanced groups, others argue the alveolates originally lacked them and possibly the dinoflagellates and Apicomplexa acquired them separately.