The dinoflagellates (Greek δῖνος dinos "whirling" and Latin flagellum "whip, scourge") are a large group of flagellate protists. Most are marine plankton, but they are common in fresh water habitats as well. Their populations are distributed depending on temperature, salinity, or depth. Many dinoflagellates are known to be photosynthetic, but a large fraction of these are in fact mixotrophic, combining photosynthesis with ingestion of prey [1]. Dinoflagellates are the largest group of marine eukaryotic aside from the diatoms. Being primary producers makes them an important part of the aquatic food chain. Some species, called zooxanthellae, are endosymbionts of marine animals and play an important part in the biology of coral reefs. Other dinoflagellates are colorless predators on other protozoa, and a few forms are parasitic (see for example Oodinium, Pfiesteria).

This group is also known as the order Dinoflagellata[2] or the class Dinophyceae.[3]

An algal bloom of dinoflagellates can result in a visible coloration of the water colloquially known as red tide.

In 1753 the first modern dinoflagellates were described by Baker and named by Muller in 1773.[4] The term derives from the Greek word δῖνος (dinos), meaning 'whirling,' and Latin flagellum, a diminutive term for a whip or scourge.

These same dinoflagellates were first defined by Otto Bütschli in 1885 as the flagellate order dinoflagellida. Botanists treated them as a division of algae, named Pyrrophyta or Pyrrhophyta ("fire algae"; Greek pyrr(h)os, fire) after the bioluminescent forms, or Dinophyta. At various times the cryptomonads, ebriids, and ellobiopsids have been included here, but only the last are now considered close relatives. Dinoflagellates have a known ability to transform from non-cyst to cyst-forming strategies which makes it extremely difficult to recreate their evolutionary history.

Part of the challenge in dinoflagellate taxonomy and nomenclature is that they have been independently classified by the rules of zoology and botany, and only recently have the disciplines converged.[5]

Although classified as eukaryotes, the dinoflagellate nuclei are not characteristically eukaryotic, as they lack histones, nucleosomes and maintain continually condensed chromosomes during mitosis. In fact, Dodge (1966)[7] termed the dinoflagellate nucleus as ‘mesokaryotic’, due to its possession of intermediate characteristics between the coiled DNA areas of prokaryotic bacteria and the well-defined eukaryotic nucleus. This group, however, does contain typically eukaryotic organelles, such as golgi bodies, mitochondria and chloroplasts [8] 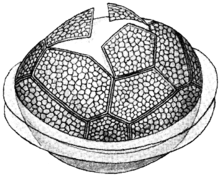 Most dinoflagellates are unicellular forms with two flagella. One of these extends towards the posterior, called the longitudinal flagellum, while the other forms a lateral circle, called the transverse flagellum. In many forms these are set into grooves, called the sulcus and cingulum. The transverse flagellum, which is coiled, provides most of the force propelling the cell, and often imparts to it a distinctive whirling motion, which is what gives them their name. The longitudinal flagellum acts mainly as a rudder, but provides a small amount of propulsive force as well.

Dinoflagellates have a complex cell covering called an amphiesma, composed of flattened vesicles, called alveoli. In some forms, these support overlapping cellulose plates that make up a sort of armor called the theca. These come in various shapes and arrangements, depending on the species and sometimes on the stage of the dinoflagellate. Fibrous extrusomes are also found in many forms. Together with various other structural and genetic details, this organization indicates a close relationship between the dinoflagellates, Apicomplexa, and ciliates, collectively referred to as the alveolates.

The chloroplasts in most photosynthetic dinoflagellates are bound by three membranes, suggesting they were probably derived from some ingested algae, and contain chlorophylls a and c and either peridinin or fucoxanthin, as well as various other accessory pigments. However, a few such as zooxanthellae, which are endosymbionts of corals and other marine animals, have chloroplasts with different pigmentation, sexuality, and structure, some of which retain a nucleus. This suggests their chloroplasts were incorporated by several endosymbiotic events involving already colored or secondarily colorless forms. The discovery of plastids in Apicomplexa have led some to suggest they were inherited from an ancestor common to the two groups, but none of the more basal lines have them. All the same, the dinoflagellate cell consists of the more common organelles such as rough and smooth endoplasmic reticulum, Golgi apparatus, mitochondria, lipid and starch grains, and food vacuoles. Some have even been found with light sensitive organelle, the eyespot or stigma, or a larger nucleus containing a prominent nucleolus. The dinoflagellate Erythropsidium has the smallest known eye.[9] 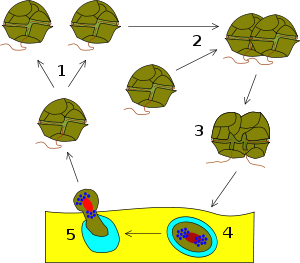 Most dinoflagellates have a peculiar form of nucleus, called a dinokaryon, in which the chromosomes are attached to the nuclear membrane. These lack histones and remain condensed throughout interphase rather than just during mitosis, which is closed and involves a unique external spindle. This sort of nucleus was once considered to be an intermediate between the nucleoid region of prokaryotes and the true nuclei of eukaryotes, and so were termed mesokaryotic, but now are considered advanced rather than primitive traits.

In most dinoflagellates, the nucleus is dikaryotic throughout the entire life cycle. They are usually haploid, and reproduce primarily through fission, but sexual reproduction also occurs.[10] This takes place by fusion of two individuals to form a zygote, which may remain mobile in typical dinoflagellate fashion or may form a resting dinocyst, which later undergoes meiosis to produce new haploid cells.[clarification needed]

When conditions become unfavourable, usually when nutrients become depleted or there is insufficient light, some dinoflagellate species alter their life cycle dramatically. Two vegetative cells will fuse together forming a planozygote. Next is a stage not much different from hibernation called hypnozygote, when the organism takes in excess fat and oil. At the same time its body enlarges and the shell gets harder. Sometimes even spikes are formed. When the weather allows it, these dinoflagellates break out of their shell and are in a temporary stage, planomeiocyte, when they quickly reform their individual thecae and return to the dinoflagellates at the beginning of the process.

Dinoflagellates sometimes bloom in concentrations of more than a million cells per millilitre. Some species produce neurotoxins, which in such quantities kill fish and accumulate in filter feeders such as shellfish, which in turn may pass them on to people who eat them. This phenomenon is called a red tide, from the color the bloom imparts to the water. Some colorless dinoflagellates may also form toxic blooms, such as Pfiesteria. Some dinoflagellate blooms are not dangerous. Bluish flickers visible in ocean water at night often come from blooms of bioluminescent dinoflagellates, which emit short flashes of light when disturbed.

The same red tide mentioned above is more specifically produced when dinoflagellates are able to reproduce rapidly and copiously on account of the abundant nutrients in the water. Although the resulting red waves are an unusual sight, they contain toxins that not only affect all marine life in the ocean but the people who consume them as well.[11] A specific carrier is shellfish. This can introduce both non-fatal and fatal illnesses. One such poison is saxitoxin, a powerful paralytic. Human inputs of phosphate further encourage these red tides, and consequently there is a strong interest in learning more about dinoflagellates, from both medical and economic perspectives.

Dinoflagellate cysts are found as microfossils from the Triassic period, and form a major part of the organic-walled marine microflora from the middle Jurassic, through the Cretaceous and Cenozoic to the present day. Because some species are adapted to different surface water conditions, these fossils from sediments can be used to reconstruct past surface ocean conditions.[12] Arpylorus, from the Silurian of North Africa was at one time considered to be a dinoflagellate cyst, but this palynomorph is now considered to be part of the microfauna (Arthropoda). It is possible that some of the Paleozoic acritarchs also represent dinoflagellates.