Tardigrades (commonly known as water bears or moss piglets)[2] form the phylum Tardigrada, part of the superphylum Ecdysozoa. They are microscopic, water-dwelling, segmented animals with eight legs. Tardigrades were first described by Johann August Ephraim Goeze in 1773 (kleiner Wasserbär = little water bear). The name Tardigrada means "slow walker" and was given by Lazzaro Spallanzani in 1777. The name water bear comes from the way they walk, reminiscent of a bear's gait. The biggest adults may reach a body length of 1.5 millimetres (0.059 in), the smallest below 0.1 mm. Freshly hatched larvae may be smaller than 0.05 mm.

The most convenient place to find tardigrades is on lichens and mosses. Other environments are dunes, beaches, soil, and marine or freshwater sediments, where they may occur quite frequently (up to 25,000 animals per litre). Tardigrades often can be found by soaking a piece of moss in spring water.[5]

Tardigrades are able to survive in extreme environments that would kill almost any other animal. Some can survive temperatures of close to absolute zero (−273 °C (−459 °F)),[6] temperatures as high as 151 °C (304 °F), 1,000 times more radiation than other animals,[7] and almost a decade without water.[8] Since 2007, tardigrades have also returned alive from studies in which they have been exposed to the vacuum of outer space in low earth orbit, and in 2011 some were sent into deep space on a Russian interplanetary probe.

Tardigrades have barrel-shaped bodies with four pairs of stubby legs. Most range from 0.3 to 0.5 millimetre (0.012 to 0.020 in) in length, although the largest species may reach 1.2 millimetres (0.047 in). The body has four segments (not counting the head), four pairs of legs without joints, and feet with four to eight claws each. The cuticle contains chitin and is moulted periodically.

Tardigrades are eutelic, with all adult tardigrades of the same species having the same number of cells. Some species have as many as 40,000 cells in each adult, while others have far fewer.[9][10]

The body cavity consists of a haemocoel, but the only place where a true coelom can be found is around the gonad. There are no respiratory organs, with gas exchange able to occur across the whole of the body. Some tardigrades have three tubular glands associated with the rectum; these may be excretory organs similar to the Malpighian tubules of arthropods, although the details remain unclear.[11]

The tubular mouth is armed with stylets, which are used to pierce the plant cells, algae, or small invertebrates on which the tardigrades feed, releasing the body fluids or cell contents. The mouth opens into a triradiate, muscular, sucking pharynx. The stylets are lost when the animal moults, and a new pair is secreted from a pair of glands that lie on either side of the mouth. The pharynx connects to a short oesophagus, and then to an intestine that occupies much of the length of the body, which is the main site of digestion. The intestine opens, via a short rectum, to an anus located at the terminal end of the body. Some species only defecate when they moult, leaving the faeces behind with the shed cuticle.[11]

The brain includes multiple lobes, and is attached to a large ganglion below the oesophagus, from which a double ventral nerve cord runs the length of the body. The cord possesses one ganglion per segment, each of which produces lateral nerve fibres that run into the limbs. Many species possess a pair of rhabdomeric pigment-cup eyes, and there are numerous sensory bristles on the head and body.[12]

Although some species are parthenogenetic, both males and females are usually present, each with a single gonad located above the intestine. Two ducts run from the testis in males, opening through a single pore in front of the anus. In contrast, females have a single duct opening either just above the anus or directly into the rectum, which thus forms a cloaca.[11]

Tardigrades are oviparous, and fertilisation is usually external. Mating occurs during the moult with the eggs being laid inside the shed cuticle of the female and then covered with sperm. A few species have internal fertilisation, with mating occurring before the female fully sheds her cuticle. In most cases, the eggs are left inside the shed cuticle to develop, but some attach them to the nearby substrate.[11]

The eggs hatch after no more than fourteen days, with the young already possessing their full complement of adult cells. Growth to the adult size therefore occurs by enlargement of the individual cells (hypertrophy), rather than by cell division. Tardigrades live for three to thirty months, and may moult up to twelve times.[11]

Most tardigrades are phytophagous (plant eaters) or bacteriophagous (bacteria eaters), but some are predatory (e.g., Milnesium tardigradum).[13][14]

Scientists have reported tardigrades in hot springs, on top of the Himalayas, under layers of solid ice and in ocean sediments. Many species can be found in a milder environment like lakes, ponds and meadows, while others can be found in stone walls and roofs. Tardigrades are most common in moist environments, but can stay active wherever they can retain at least some moisture. 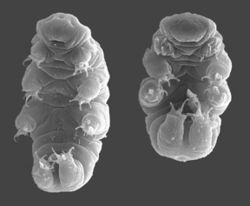 Tardigrades are one of the few groups of species that are capable of reversibly suspending their metabolism and going into a state of cryptobiosis. Several species regularly survive in a dehydrated state for nearly ten years. Depending on the environment they may enter this state via anhydrobiosis, cryobiosis, osmobiosis or anoxybiosis. While in this state their metabolism lowers to less than 0.01% of normal and their water content can drop to 1% of normal. Their ability to remain desiccated for such a long period is largely dependent on the high levels of the non-reducing sugar, trehalose, which protects their membranes. In this cryptobiotic state the tardigrade is known as a tun.[15]

Tardigrades have been known to withstand the following extremes while in this state: 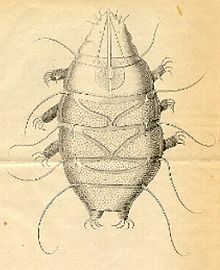 Illustration of Echiniscus testudo sp. from 1861

Recent DNA and RNA sequencing data indicate that tardigrades are the sister group to the arthropods and Onychophora.[26] These groups have been traditionally thought of as close relatives of the annelids,[27] but newer schemes consider them Ecdysozoa, together with the roundworms (Nematoda) and several smaller phyla. The Ecdysozoa-concept resolves the problem of the nematode-like pharynx as well as some data from 18S-rRNA and HOX (homeobox) gene data, which indicate a relation to roundworms.

The minute sizes of tardigrades and their membranous integuments make their fossilization both difficult to detect and highly unlikely. The only known fossil specimens comprise some from mid-Cambrian deposits in Siberia and a few rare specimens from Cretaceous amber.[28]

The rare specimens in Cretaceous amber comprise Milnesium swolenskyi, from New Jersey, the oldest, whose claws and mouthparts are indistinguishable from the living M. tartigradum; and two specimens from western Canada, some 15–20 million years younger than M. swolenskyi. Of the two latter, one has been given its own genus and family, Beorn leggi (the genus named by Cooper after the character Beorn from The Hobbit by J. R. R. Tolkien and the species named after his student William M. Legg); however, it bears a strong resemblance to many living specimens in the family Hypsibiidae.[28][29]

Aysheaia from the middle Cambrian Burgess shale has been proposed as a sister-taxon to an arthropod-tardigrade clade.[30]

Tardigrades have sometimes been linked to the prehistoric oddity Opabinia as a close living relative.[31]

Tardigrade genomes vary in size, from about 75 to 800 megabase pairs of DNA.[32] The genome of a tardigrade species, Hypsibius dujardini, is being sequenced at the Broad Institute.[33] Hypsibius dujardini has a compact genome and a generation time of about two weeks, and it can be cultured indefinitely and cryopreserved.[34]