The South Nahanni River is a major tributary of the Liard River, located roughly 500 kilometres west of Yellowknife in the Northwest Territories of Canada. It is the centerpiece of Nahanni National Park Reserve. It flows from the Mackenzie Mountains in the west, through the Selwyn Mountains, growing as it heads east over the majestic Virginia Falls, and finally empties into the Liard River. The Nahanni has a unique geological history. It was formed when the area was a broad flat plain, forming a winding course typical of flatland rivers. As the mountains lifted, the river cut four deep canyons into the rock, maintaining its eccentric course.

The Dene and their ancestors have lived and hunted in the Nahanni area for thousands of years. In the early 19th century, the first Europeans came to the area, seeking fur and gold; however, it wasn't until the 1950s, with the publishing of Dangerous River by R.M. Patterson that the legends about the region were put to rest and the river finally came to prominence. Since that time, the Nahanni has become one of the prime wilderness rivers in Canada, frequented as a whitewater destination by adventure seekers around the world. 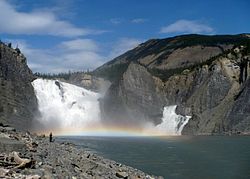 The South Nahanni River originates on the western slopes of Mount Christie of the Mackenzie Mountains, at an elevation of 1600m. It flows south on the Yukon/Northwest Territories border for 10 km, then turns south-east into the Northwest Territories at the Moose Ponds. It flows through the Selwyn Mountains, where it receives the waters of the Little Nahanni River, south of the Sapper Range. East of the Bologna Ridge it turns west, then again south-east. It receives the waters of the Broken Skull River east of the Vampire Peaks Range, then the waters of the Rabittkettle River & Hole in the Wall Creek as it enters the Nahanni National Park Reserve. The river crosses the entire length of the park reserve, and the confluence with the Flat River is also located here. At the eastern limit of the national park it passes between the Liard Range and the Twisted Mountain, where it receives the Jackfish River, then continues in a meandered flow and empties into the Liard River at Nahanni Butte, 90 km north of Fort Liard, at an elevation of 180 m. Note: The South Nahanni River has recently been proven to run 563 km.

From headwaters to mouth, the South Nahanni River receives waters from the following tributaries:

The history of the area began 550 million years ago beneath a tropical sea. Here a sedimentary layer of sandstone and limestone formed from the powerful pressure exerted by the sea. Eventually this sea dried up, forming a wide plain upon which the Nahanni River first took its course.

The Nahanni is unique amongst mountainous rivers. It formed long before the mountains ever existed, establishing a winding course typical of prairie rivers. As the mountains rose around it, the Nahanni maintained its course, cutting steep canyons into the land. 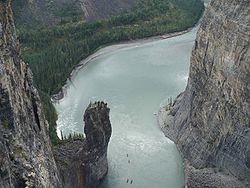 The river runs through several distinct ranges of mountains, all part of the Mackenzie Range. At its head waters, it runs through the much more rugged Selwyn Mountains, formed from the colliding North American and Pacific Plates roughly 200 million years ago. As the river travels east, it transitions into a gentler terrain of rolling sedimentary mountains formed around the same time by batholiths pushing the sedimentary layers upward, and forming large granite intusions. Finally, the Nahanni empties into the plains of the Liard River, unaffected by the powerful forces nearby.

During the last glaciation two ice sheets advanced along the Nahanni. The Cordilleran advanced from the west, and the Laurentide from the east. The middle portions of the river managed to escape glaciation entirely, and so feature some of the oldest undisturbed landscape in Canada.

Although it escaped the powerful scouring effects of the glaciars, the middle section of the river was not entirely unaffected. The Laurentide Ice Sheet blocked off the mouth of the river, and so the river valley filled up, twice forming the large glacial lake Nahanni, and once forming the smaller Glacial Lake Tetcella. This had a profound effect on the river's most famous feature, Virginia Falls.

The current course of the Nahanni River around Virginia Falls was originally blocked by a spur of the nearby Sunblood Mountain. Sometime during the Illinoian Stage (352,000 to 132,000 years ago), a glacier severed the spur, and the river took its present course, cutting into the land and forming the Fourth Canyon. During the last glaciation, the valley was immersed by Glacial Lake Nahanni, and heavy silting from the glacial water filled in the course once again, shifting the falls to their present location.

Further downstream, the First, Second, and Third Canyons were also unaffected by the direct power of glaciation. The canyons of the Nahanni River are somewhat unique as a result. Usually when a river erodes the land, forming a valley, the valley takes the form of a V shape. The effect of glaciers on these V-shaped valleys is unmistakable, leaving a steeper U-shaped valley. Because the Nahanni's course was already established before the mountains rose, it formed steep canyon wall that plummet hundreds of feet to the river's edge. Relatively untouched by glaciation, these canyons continue in their ancient state.

On June 29, 1964 after 41 people had died attempting to conquer the Nahanni River, nicknamed “the man eater”, explorer parachutist Jean Poirel from Montreal jumped at its source 500 km north of Yellowknife, in an attempt to explore the valley for the first time. He was followed by his teammate and friend Bertrand Bordet who was quoted for saying:" You really are crazy! But If you go, I'll go!". They found themselves in an unknown territory, and could not count on any help or rescue from the civilized world. In survival mode, they would have to face spongy swamps, cold weather, hunger, wolves, grizzly bears, and mosquitoes.

Further downriver they reached the base camp established by Claude Bernardin and Roger Rochat, who arrived from Yellowknife by seaplane. The four men continued the exploration, fighting the savage force of the river and its freezing rapids. Jean Poirel got the idea of going down the river with inflatable dinghies, opening the path to a new “rafting” sport. These dinghies were round in shape and nearly impossible to steer, and they broke numerous paddles as they spun through rapids at the mercy of the river. Against all odds and after months of fighting the unknown, the "crazy French men" vainquished for the first time the Nahanni River and its dangerous rapids.[citation needed]

During the following four consecutive expeditions in the valley, Jean Poirel and his team discovered more than 250 caverns. The most important contained 116 Dall sheep’s skeletons aged 2500 years, giving this discovery an inestimable value. Jean Poirel named it “Valerie Cavern” after his daughter.[4] He took topographic notes and drew detailed maps, paving the way for the creation of Nahanni Park.[5].

In 1972, during his last expedition, Jean Poirel guided then Prime Minister Pierre Trudeau, who came in person to evaluate this mysterious and fascinating region. Following his visit Pierre Trudeau declared the Nahanni a National Park for Canada.

The South Nahanni River was inscribed in the Canadian Heritage Rivers System in January 1987, for its natural and human heritage.[2]