Into the Electric Castle

Into the Electric Castle 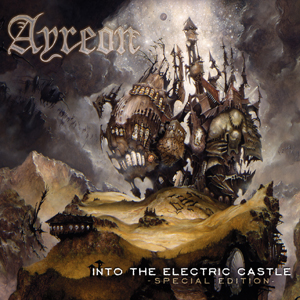 "Into the Electric Castle" is a two-disc album released in 1998 by Dutch multi-instrumentalist Arjen A. Lucassen, and is the third album of his project.

After the previous Ayreon album, "", sold below expectations, Arjen sought to deliver a top-quality recording, or else it might mean the end of his Ayreon project. "Into the Electric Castle" tells a dynamic sci-fi story featuring over the top, exaggerated characters, and features an incredibly diverse array of musical styles, including , metal, folk, electronic, psychedelic, pop, gothic, blues, and . The end result was received with critical acclaim, and sold very well.

In 2004, Arjen moved to a new record label, InsideOut Germany, and with this move came re-issues of all the previous Ayreon releases, including "Into the Electric Castle". The special edition re-issue came with two Quicktime videos in which Arjen looks back at the creation and production of this recording, as well as some exclusive audio clips.

Welcome to the New Dimension

The story begins with a strange voice () calling out to the various characters that are taken from various planes of time. The mysterious voice tells them they are in a place of "no-time and no-space". Urging them to continue, the voice grants them with a task, to reach The Electric Castle and find out what's inside of it.

The characters appear. Upon their arrival, the Highlander (Fish) claims that it is Hell, and he is there to pay for his sins, while the Indian () tells that it's a journey. The () believes that this place is the Island of and he is here to find the , but the Roman (Edwin Balogh) believes it to be underworld, the "jaws of Orcus". Finally, the Egyptian () believes that it is the fields and they have entered the hall of Isis and Osiris. The Roman desperately calls on Mars and Jupiter, while the Highlander concludes that they are lost because they cannot recognise the stars. He senses "the end is near".

The voice urges them to continue, wherein the () claims that the place is cursed, and he must be there for a quest. He delights in everything he has done as a Barbarian. Meanwhile the () enjoys his surroundings, believing he's in a drug-induced stupor.

man () meets the Knight, musing on whether all this might be a simulation. The Knight disregards the Futureman's strange words and tells him of his quest for the Grail, while the Roman despairs that they cannot reach .

The voice urges the rest to go into The Tunnel of Light, and they continue their journey with joy and determination. The Highlander cannot bear the light of the tunnel and stays behind. He accepts his death slowly, and lays himself down to die while the others continue. The Egyptian calls out the names of , Heliopolis, Ka and , the Roman believes they're going to Elysium, while the Knight thinks on Avalon.

Across the Rainbow Bridge

The voice hurries the heroes to cross the fragile, and yet so strong, Rainbow Bridge, in order to get to The Electric Castle. The Knight muses about his lost love, and about his determination to go back, return to his time in order to meet her again. The Roman is much more passionate in the quest, believing to be in the presence of the , while The Hippie is lost, enjoying this colorful rainbow surroundings while still high, but following the Roman and the Knight regardless.

The Garden Of Emotions

The heroes come to The Garden of Emotions, a garden in front of The Electric Castle. The voice tells them that they must go through the Garden in order to reach the Castle. The Hippie, now awakened, is overjoyed by the sights he has seen; the magical world that surrounds him. The Egyptian's words grow more morbid, as if she senses that has come for her. Meanwhile, the Roman and the Barbarian argue on who will take the lead and take the rest through the Garden, while the Indian fears the hostile intent of the voice. The Indian and the Knight allude to the rising emotions. The Futureman is convinced the Garden is in fact a computer algorithm which turns their negative emotions against them, and urges them to pull together as a team.

The Valley of Queens

The Egyptian, overwhelmed by her emotions, loses her will to continue. She trails off from the rest of the group, and wanders alone until she lays herself down and dies as well, hoping to go to the hall of Osiris and then, to the .

This song can be heard as a background to the modem and ambient sounds in the song "Web of Lies", from the "" album.

The remaining ones enter The Electric Castle, the Knight and the Barbarian proceeding first to go through The Castle Hall. Suddenly the voice says "Here, the disembodied astral world becomes flesh once more. I pity the men of swords. For here, blood runs cold...". Now the Barbarian and the Knight have to struggle through the horrific ghosts, ghouls and demons of those they've slain, that appeared in the hall. While the Barbarian cannot believe these apparitions, the Knight calls upon and the mighty to help him.

While the Knight and the Barbarian engage the specters in the Castle Hall, the Hippie and the Futureman go up the stairs of The Tower of Hope. While the Hippie is delighted at the joyful future he surveys, the Futureman fears it is an illusion and that they have to move on in order to escape.

The Indian, the Roman and the Futureman, at the high towers of the Electric Castle, remain where a breeze draws the attention of the Indian, luring her away towards the sun. The Futureman and the Roman attempt to stop the Indian from being lured into following the path to impending death, however, the Indian appears to be oblivious to the danger she's in. On the breeze, the Indian encounters Death itself ( and ), who first appears to her claiming to be several elements of her salvation (the breeze, the , the , the , the and her own fate), until finally claiming, with a scream of the Indian, her "final breath".

The remaining heroes come to The Mirror Maze. The Hippie reflects on his past, talking to his reflection in the mirrors about what made him the way he is ("he's aware that no one cares/and life's unfair/so he grows his hair/and takes a trip into eternity"). The Futureman encourage the Hippie to defy this ghost from the past. The Knight and the Roman, meanwhile, struggle with their own desperation: the Knight being more optimistic and helping the Roman to break out of the Mirror Maze.

They arrive at a door through which the future is revealed. The Futureman opens it, and to his despair it reveals how a cyber-brain will be devised as the final stage of digitalization, leading to end of all human emotion and feeling. They continue.

The heroes arrive at The Two Gates: one opening to oblivion and death, the other, to the desired time of the heroes. The voice mentions that it is a brave soul who makes the first choice. One of the gates is old, deteriorated, and ugly; the other is made of gold and appears at first glance to be paradise. The Barbarian, in his arrogance and pride, walks through the golden gate, which in reality is the gate to death. He passes through the gate, first believing that it led to , where he would meet , but soon he realizes he is fading into oblivion, and calls on the Valkyries to take him to Odin's place. The others succeed in passing through the other door, wherein the Knight demands that the Voice reveals the purpose of their ordeal.

"Forever" of the Stars

The mystical voice then reveals its identity as "Forever of the Stars". It claims that his kind (an alien species called "Forever", which live on the Planet Y, as hinted at in , and then revealed in "01011001") has lived for a long time, and as a result of such extensive life and finding the secret of longevity, they had lost all emotions aeons ago. It claims its kind caused the emergence of humanity on Earth ("We vanquished the dinosaurs with the careless trajectory of a child's lost meteorite. We peopled your planet to experience your emotions, such feelings lost to us aeons ago".) Forever states that their lives, and the planet Earth was their experiment in understanding and/or rediscovering s. Forever hints that all the travelers are Ayreon pre- or re-incarnations ("And eight of you, plucked from Time. Not randomly, you understand"). Forever's voice grows weaker as it reflects on how it has grown weary and tired over its long life, and that he too is "far from home". It tells them to go on ahead and open the door, and that they won't remember what has happened.

The process of Forever and his people creating humanity is further elaborated on in "01011001", specifically in the song "Ride the Comet". It is also revealed that humanity was born from the Forevers' own , in order to create a new race of Forevers, so that they could once again experience their lost emotions.

Another Time, Another Space

Back in their real time, the heroes all wonder what had happened. The Hippie is unsure as to whether their journey actually happened; the Futureman is left anxious and without any real memories of what occurred; the Roman claims that whatever it was, it has helped him become whole, dissipating all his fears; the Knight speaks of finding the "grail within", and completing his task.

Forever of the Stars asks them all to remember forever.

* [http://lyricwiki.org/Ayreon:Into_The_Electric_Castle_%281998%29 Into the Electric Castle Lyrics]