The Great Orme (Welsh: Y Gogarth or Pen y Gogarth) is a prominent limestone headland on the north coast of Wales situated in Llandudno. It is referred to as Cyngreawdr Fynydd in a poem by the 12th century poet Gwalchmai ap Meilyr.[1] It is echoed by the Little Orme, a smaller but very similar limestone headland, which is on the eastern side of Llandudno Bay in the parish of Llanrhos.

The Great Orme is run as a nature reserve by the Conwy County Borough Countryside Service, with a number of protective designations (including Special Area of Conservation, Heritage Coast, Country Park, and Site of Special Scientific Interest), being an area 2 miles (3.2 km) long by 1 mile (1.6 km) wide. It is home to a long-established herd of about two hundred[2] feral Kashmir goats (acquired from Queen Victoria).[3] There are numerous paths for walking on the summit, including a section of the North Wales Path, a long distance route. About half the Great Orme is in use as farmland, mostly for sheep grazing. 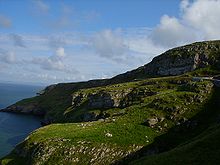 A view of the Great Orme cliffs from the former Lighthouse. 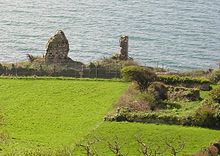 Almost all that remains above ground of the Bishop of Bangor's 13th century palace at Gogarth is the short wall on the left, the narrow column to the right of centre collapsed into the sea during the storms of March 2005 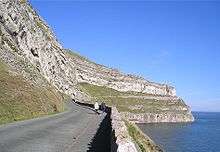 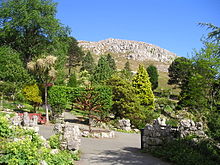 The geology of the Great Orme is limestone and the surface is particularly noted for the limestone pavements covering several headland areas. There are also rich seams of Dolomite-hosted copper ore.

The Great Orme has a very rich flora, including most notably the only known site of the critically endangered Wild Cotoneaster Cotoneaster cambricus, of which only six wild plants are known.[4]

Many of the flowers growing in shallow lime-rich earth on the headland have developed from the alpine sub-Arctic species that developed following the last ice-age.

The White Horehound (Marrubium vulgare), which is found growing on the western-most slopes of the Orme is said to have been used, and perhaps cultivated, by fourteenth century monks, no doubt to make herbal remedies including cough mixtures. The rare Horehound Plume Moth (Pterophorus spilodactylus) lays her eggs amongst the silky leaves and its caterpillars rely for food solely upon this one plant.

The headland is the habitat of several endangered species of butterflies and moths, including the Silky Wave, the Silver-studded Blue (Plebejus argus subsp. caernesis) and the Grayling (Hipparchia semele thyone) These last two have adapted to the Great Orme by appearing earlier in the year to take advantage of the limestone flowers and grasses. Also they are smaller than in other parts of the country and are recognised as a definite subspecies.

The caves and abandoned mine workings are home to large colonies of the rare Horseshoe bat. This small flying mammal navigates the caves and tunnels by using echo location to obtain a mental picture of its surroundings. During the daytime, Horseshoe bats are found suspended from the roof of tunnels and caves, with their wings tightly wrapped around their bodies. Only at dusk do the bats leave the caves and mine shafts, to feed on beetles and moths.

The cliffs are host to colonies of seabirds (such as guillemots, kittiwakes, razorbills and even fulmars as well as gulls). The Great Orme is also home to many resident and migrant land birds including ravens, little Owls and peregrine falcons.

Below the cliffs, the rock-pools around the headland are a rich and varied habitat for aquatic plants and animals including barnacles, red beadlet anemones and hermit crabs.

The medieval parish of Llandudno comprised three townships, each established on the lower slopes of the Great Orme. The township of Y Gogarth at the south-western 'corner' of the Great Orme was latterly the smallest but it contained the palace of the Bishop of Bangor. The Manor of Gogarth (which included all three townships) had been bestowed on Anian, Bishop of Bangor by King Edward I in 1284 in recognition of services rendered to the crown, notably the baptism of the first English Prince of Wales, newly born at Caernarfon. The palace was burnt down by Owain Glyndŵr in 1400 and the ruins have mostly been washed away together with much of the township by coastal erosion in the Conwy Estuary.

The significant agricultural yet north facing township of Cyngreawdr includes the original parish church and rectory of St Tudno, a sixth or seventh century foundation. Following the Glyndŵr uprising, the villagers of the Creuddyn peninsula were harshly taxed and by 1507 they had nearly all fled their homes. Henceforth the cultivated land lay fallow and is now grazed by sheep and goats. Llandudno's Victorian cemetery, which is still in regular use, was laid out in 1859 adjacent to the 12th century church of Saint Tudno where open-air services are held every Sunday Morning in summer. Nearby are several large ancient stones that have become shrouded in folklore and also an unexplained stone lined avenue called Hwylfa'r Ceirw leading towards Cilfin Ceirw (Precipice of Deer).

The third township was Yn Wyddfid clustered below the Iron Age hill fort of Pen y Dinas at the north eastern "corner" of the Great Orme. With the reopening of the copper mines from the 18th century onwards, this township grew considerably in size with the streets and cottages of the mining village laid out on the largely abandoned agricultural holdings.

Natural wells were greatly prized in limestone districts and the Great Orme was no exception. Water was required for copper mining purposes as well as for domestic and agricultural use. The following Great Orme wells are known and most still supply running water:

Possibly one of the wells supplying the needs of the once populous Gogarth community before much of it was lost to coastal erosion.

The main water source for Gogarth and in the later eighteenth and early nineteenth centuries the power source to operate the famous Tom and Gerry engine that though a long series of Brammock rods powered the mine water pumps at the Higher shaft near the summit above Pyllau.

This well, near Mynydd Isaf, to the north of Pen Dinas, is a source of lime-rich water known for its petrifying qualities, it is one of two wells known to have been used in the washing of copper ores.

Situated beyond the road, near the north-east corner of St Tudno's Church, ffynnon Tudno was, together with ffynnon Rufeinig, a principal source of water for the community settled round the church.

Translated Roman Well it takes its name from the tradition that Roman copper miners used its waters to wash the copper ores mined nearby.

A spring of water located in Ogof Llech, a cave on the headland very difficult of access, and claimed to have been used as a hermitage by Saint Tudno a sixth century monk of Bangor-is-y-Coed who established the first church here.

Literally "Mare's well" this spring was revealed, at the side of the road, about half way round and near the highest point (and where it can still be seen), during the construction of the Marine Drive in the nineteenth century. It was thus ideally situated to refresh the horses on that five mile carriage drive round the base of the Great Orme. 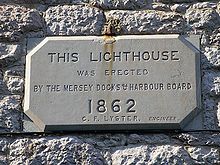 Plaque on the Llandudno lighthouse.

The Great Orme Mines are possibly the most important copper mines of the Bronze Age yet discovered and excavated. Apparently abandoned around 600 BC, but with some evidence of Roman patronage, the mines were reopened in 1692 and continued to be worked until the end of the 19th century. It is possible that some of the copper from the mine was exported to Continental Europe, even in the Bronze Age. In addition to the three main mining areas, there are many open-cast bell pit mines along the lines of the main geological faults.

In the 20th century the mines were once again reopened, and the Bronze Age mine workings are now a fee-paying attraction for the public to experience.

Views from the Summit

Due to its location the Great Orme commands extensive views particularly towards the East and North. On particularly clear days, the Isle of Man and the Lake District are visible on the horizon. 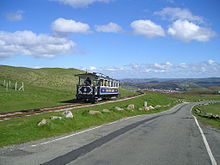 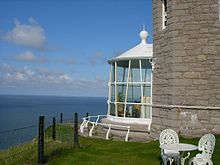 View from the lamp suite of the Llandudno lighthouse bed & breakfast establishment. This room used to be where the optic of the lighthouse was set. Now the optic is on permanent display in the Summit Complex visitors' centre at the peak of the Great Orme.

A cabin-lift (built 1969) and the Great Orme Tramway, a vintage tram system (built 1902), convey visitors to the summit of the Great Orme, past one of only two artificial ski slopes in North Wales, complete with one of the longest toboggan runs in the UK.

The 'Marine Drive' toll road runs around the coastal perimeter of the Orme and leads to St. Tudno's Church, the award-winning Bronze Age Copper Mine and to the Great Orme Summit complex with car park. The toll road ticket also pays for the parking at the Summit Complex.

On the northernmost point of the Orme there is the decommissioned Llandudno lighthouse which has been converted to a small bed & breakfast guest house with accommodation for eight guests. Nearby, on the Marine Drive, is the old established "Rest and be thankful" café with a large car park.

The Royal Artillery coastal gunnery school was transferred from Shoeburyness to the Great Orme in 1940 (and additionally to the Little Orme in 1941) during the Second World War. Target practice was undertaken from the headland to anchored boats. The foundations of some of the buildings and installations remain and can be seen from the western end of the Marine Drive. There was also a Chain Home Low radar station operated by the Royal Air Force at the hotel during World War II.

Origin of the word 'Orme' 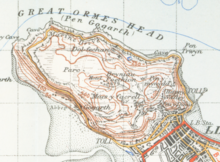 Both the Great and Little Ormes have been etymologised to the Old Norse word for sea serpent (transliterated to urm or orm - the English word worm having the same origin). Marauding Vikings are thus said to have believed that the Ormes (and the wider Creuddyn peninsula) resembled a sea serpent - with the Great Orme being the serpent's head - as their boats came in. But it is very difficult to substantiate this belief because the Vikings left us no written texts, and although they certainly raided the area they do not appear to have colonised it. There are other Norse names in the kingdom of Gwynedd (such as Point of Ayr), but etymology is an imprecise tool.

Until the coming of tourism in the 19th century (and the first tourists and developers came by sea), the name used for the wider peninsula as a whole was usually Creuddyn (the name of the medieval cwmwd in the area) but Y Gogarth or Pen y Gogarth for the Orme itself, and the name Orme appears to have been used for the headland as seen from the sea. This is the case in the "Plan of the Bay & Harbour of Conway in Caernarvon Shire" by Lewis Morris and published in 1748, which map boldly shows the name "CREUDDYN" in the body of the peninsula and applies the name "Orme's Head" beyond the Great Orme headland at its north-westerly seaward point.[5]