Oţelu Roşu is located at an altitude of approximately 300 meters in Valea Bistrei valley, which is between the Poiana Ruscăi mountains to the north and the Ţarcu Mountains to the south. To the south of Oţelu Roşu is a large piedmont of the Ţarcu Mountains, locally named Gai. To the north the town makes direct contact with the foothills of the Poiana Ruscăi Mountains. Dominant heights are the hill of Ferdinand (overlooking the foundry) and the hill of Chiciura. 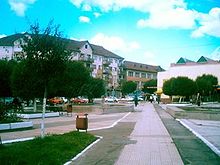 Oţelu Roşu is subjected to west European climatic influences because of its altitude and location. The altitude and the neighbouring forests and mountains ensure a mild climate. In the winter, snow may persist as much as two or three months, however the temperatures do not drop too low. In the spring months, especially May, floods are possible due to the melting of the snow in the high areas of the Ţarcu Mountains and abundant rains. The most recent flood took place in the year 2000, destroying several bridges across the river Bistra.

The first signs of human habitation date from the Paleolithic, in form of primitive tools. Sporadic remnants from the Neolithic age have been found in the neighbouring areas.

During the wars between Romans and Dacians, the Bistra Valley was the route used by the emperor Trajan in penetrating into the heartland of Dacia. A Roman castrum can be found near the cemetery of Zăvoi (ancient Agnaviae), a settlement close to Oţelu Roşu.

In the fifteenth century, during medieval times, Oţelu Roşu was mentioned under the name of "Bistra", and later with the Hungarian name of Nándorhegy. After the expulsion of Turks from Banat by the Habsburgs, the area was colonised by Germans. Also, Italians are brought in to work in metalworking industry. Later, as Transylvania became part of Romania, the name of Nándorhegy was replaced with the Ferdinand.

After 1947 the name Ferdinand did not please the communists, therefore they changed it to Oţelu Roşu ("[The] Red Steel") in order to underline the importance of the town's metalworking industry.

The population was 12,989 (2000) and 13,128 (1999). Causes of this demographic regress are among others the problems of the metalworking industry and the high unemployment, making many young people leave the town and move into regional centers such as Timişoara and other areas of Romania.

The town has three schools and one industrial high school.