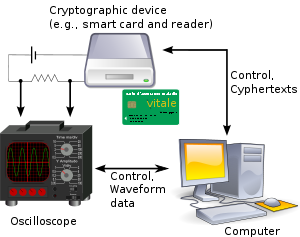 A diagram of differential power analysis. 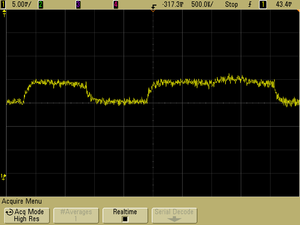 An attempt to decode RSA key bits using power analysis. The left peak represents the CPU power variations during the step of the algorithm without multiplication, the right (broader) peak - step with multiplication, allowing to read bits 0, 1.

In cryptography, power analysis is a form of side channel attack in which the attacker studies the power consumption of a cryptographic hardware device (such as a smart card, tamper-resistant "black box", or integrated circuit). The attack can non-invasively extract cryptographic keys and other secret information from the device.

Simple power analysis (SPA) is a side-channel attack which involves visual examination of graphs of the current used by a device over time. Variations in power consumption occur as the device performs different operations. For example, different instructions performed by a microprocessor will have differing power consumption profiles. As a result, in a power trace from a smart card performing a DES encryption, the sixteen rounds can be seen clearly. Similarly, squaring and multiplication operations in RSA implementations can often be distinguished, enabling an adversary to compute the secret key. Even if the magnitude of the variations in power consumption are small, standard digital oscilloscopes can easily show the data-induced variations. Frequency filters and averaging functions (such as those built into oscilloscopes) are often used to filter out high-frequency components.

Differential power analysis (DPA) is a side-channel attack which involves statistically analyzing power consumption measurements from a cryptosystem. The attack exploits biases varying power consumption of microprocessors or other hardware while performing operations using secret keys. DPA attacks have signal processing and error correction properties which can extract secrets from measurements which contain too much noise to be analyzed using simple power analysis. Using DPA, an adversary can obtain secret keys by analyzing power consumption measurements from multiple cryptographic operations performed by a vulnerable smart card or other device.

High-Order Differential Power Analysis (HO-DPA) is an advanced form of DPA attack. HO-DPA enables multiple data sources and different time offsets to be incorporated in the analysis. HO-DPA is less widely practiced than SPA and DPA, as the analysis is complex and most vulnerable devices can be broken more easily with SPA or DPA.[2]

Power analysis provides a way to "see inside" otherwise 'tamperproof' hardware. For example, DES's key schedule involves rotating 28-bit key registers. Many implementations check the least significant bit to see if it is a 1. If so, the device shifts the register right and prepends the 1 at the left end. If the bit is a zero, the register is shifted right without prepending a 1. Power analysis can distinguish between these processes, enabling an adversary to determine the bits of the secret key.

For applications where devices may fall into the physical possession of an adversary, protection against power analysis is generally a major design requirement. For example, FIPS 140-3 requires power analysis countermeasures for cryptographic devices bought to the U.S. government. Power analysis have also been reportedly used against conditional access modules used in pay television systems.[3]

Power analysis attacks cannot generally be detected by a device, since the adversary's monitoring is normally passive. In addition, the attack is non-invasive. As a result, physical enclosures, auditing capabilities, and attack detectors are ineffective. Instead, cryptosystem engineers must ensure that devices' power variations do not reveal information usable by adversaries.

Simple power analysis can easily distinguish the outcome of conditional branches in the execution of cryptographic software, since a device does different things (consuming different power) depending on whether the conditional branch is taken. For this reason, care should be taken to ensure there are no secret values which affect the conditional branches within cryptographic software implementations. Other sources of variation, such as microcode differences, branches introduced by compilers, and power consumption variations in multipliers, also commonly lead to SPA vulnerabilities.

Differential power analysis is more difficult to prevent, since even small biases in the power consumption can lead to exploitable weaknesses. Some countermeasure strategies involve algorithmic modifications such that the cryptographic operations occur on data that is related to the actual value by some mathematical relationship that survives the cryptographic operation. One approach involves blinding parameters to randomize their value. Other countermeasure strategies to reduce the effectiveness of DPA attacks involve hardware modifications: varying the chip internal clock frequency has been considered to desynchronize electric signals, which lead in return to algorithmic enhancements of traditional DPA. [5], [6]