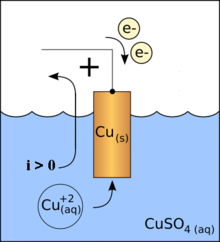 Diagram of a copper cathode in a galvanic cell (e.g., a battery). A positive current i flows out of the cathode (CCD mnemonic: Cathode Current Departs).

A cathode is an electrode through which electric current flows out of a polarized electrical device. Mnemonic: CCD (Cathode Current Departs).

An electrode through which current flows the other way (into the device) is termed an anode.

The word was coined in 1834 from the Greek κάθοδος (kathodos), 'descent' or 'way down', by William Whewell, who had been consulted[2] by Michael Faraday over some new names needed to complete a paper on the recently discovered process of electrolysis. In that paper Faraday explained that when an electrolytic cell is oriented so that electric current traverses the "decomposing body" (electrolyte) in a direction "from East to West, or, which will strengthen this help to the memory, that in which the sun appears to move", the cathode is where the current leaves the electrolyte, on the West side: "kata downwards, `odos a way ; the way which the sun sets". [3][4]

The use of 'West' to mean the 'out' direction (actually 'out' → 'West' → 'sunset' → 'down', i.e. 'out of view') may appear unnecessarily contrived. Previously, as related in the first reference cited above, Faraday had used the more straightforward term "exode" (the doorway where the current exits). His motivation for changing it to something meaning 'the West electrode' (other candidates had been "westode", "occiode" and "dysiode") was to make it immune to a possible later change in the direction convention for current, whose exact nature was not known at the time. The reference he used to this effect was the Earth's magnetic field direction, which at that time was believed to be invariant. He fundamentally defined his arbitrary orientation for the cell as being that in which the internal current would run parallel to and in the same direction as a hypothetical magnetizing current loop around the local line of latitude which would induce a magnetic dipole field oriented like the Earth's. This made the internal current East to West as previously mentioned, but in the event of a later convention change it would have become West to East, so that the West electrode would not have been the 'way out' any more. Therefore "exode" would have become inappropriate, whereas "cathode" meaning 'West electrode' would have remained correct with respect to the unchanged direction of the actual phenomenon underlying the current, then unknown but, he thought, unambiguously defined by the magnetic reference. In retrospect the name change was unfortunate, not only because the Greek roots alone do not reveal the cathode's function any more, but more importantly because, as we now know, the Earth's magnetic field direction on which the "cathode" term is based is subject to reversals whereas the current direction convention on which the "exode" term was based has no reason to change in the future.

Since the later discovery of the electron, an easier to remember, and more durably technically correct (although historically false), etymology has been suggested: cathode, from the Greek kathodos, 'way down', 'the way (down) into the cell (or other device) for electrons'.

The flow of electrons is always from anode to cathode outside of the cell or device, regardless of the cell or device type and operating mode, with the exception of diodes where electrode naming always assumes current flows in the forward direction (that of the arrow symbol), i.e., electrons flow in the opposite direction, even when the diode reverse-conducts either by accident (breakdown of a normal diode) or by design (breakdown of a Zener diode, photo-current of a photodiode or solar cell).

In chemistry, a cathode is the electrode of an electrochemical cell at which reduction occurs; a useful mnemonic to remember this is AnOx RedCat. The cathode can be negative as when the cell is electrolytic (where electrical energy provided to the cell is being used to decompose chemical compounds); or positive as when the cell is galvanic (where chemical reactions are used to generate electrical energy). The cathode supplies electrons to the positively charged cations which flow to it from the electrolyte (even if the cell is galvanic, i.e., when the cathode is positive and therefore would be expected to repel the positively charged cations; this is due to electrode potential relative to the electrolyte solution being different for the anode and cathode metal/electrolyte systems in a galvanic cell).

In an electrolytic cell, the cathode is where the negative polarity is applied to drive the cell. Common results of reduction at the cathode are hydrogen gas or pure metal from metal ions. When discussing the relative reducing power of two redox agents, the couple for generating the more reducing species is said to be more "cathodic" with respect to the more easily reduced reagent.

When metal ions are reduced from ionic solution, they form a pure metal surface on the cathode. Items to be plated with pure metal are attached to and become part of the cathode in the electrolytic solution.

In physics or electronics, a cathode is an electrode that emits electrons into the device.

In a vacuum tube or electronic vacuum system, the cathode emits free electrons. Electrons are extracted from metal electrodes either by heating the electrode, causing thermionic emission, or by applying a strong electric field and causing field electron emission. Electrons can also be emitted from the electrodes of certain metals when light of frequency greater than the threshold frequency falls on it. This effect is called photoelectric emission.

Cathodes used for field electron emission in vacuum tubes are called cold cathodes. Heated electrodes or hot cathodes, frequently called filaments, are much more common. Most radios and television sets prior to the 1970s used filament-heated-cathode electron tubes for signal selection and processing; to this day, a hot cathode forms the source of the electron beam(s) in cathode ray tubes in many television sets and computer monitors. Hot electron emitters are also used as the electrodes in fluorescent lamps and in the source tubes of X-ray machines.

In a semiconductor diode, the cathode is the N–doped layer of the PN junction with a high density of free electrons as a result of doping, and an equal density of fixed positive charges, which are the dopants that have been thermally ionized. In the anode, the converse applies: It features a high density of free "holes" and consequently fixed negative dopants which have captured an electron (hence the origin of the holes).

When P and N-doped layers are placed in contact, diffusion ensures that electrons flow from high to low density areas: That is, from the N to the P side. They leave behind the fixed positively charged dopants near the junction. Similarly, holes diffuse from P to N leaving behind fixed negative ionised dopants near the junction. These layers of fixed positive and negative charges, collectively known as the depletion layer because they are depleted of free electrons and holes. The depletion layer at the junction is at the origin of the diode's rectifying properties. This is due to the resulting internal field and corresponding potential barrier which inhibit current flow in reverse applied bias which increases the internal depletion layer field. Conversely, they allow it in forwards applied bias where the applied bias reduces the built in potential barrier.

Electrons which diffuse from the cathode into the P-doped layer, or anode, become what is termed "minority carriers" and tend to recombine there with the majority carriers, which are holes, on a timescale characteristic of the material which is the p-type minority carrier lifetime. Similarly, holes diffusing into the N-doped layer become minority carriers and tend to recombine with electrons. In equilibrium, with no applied bias, thermally assisted diffusion of electrons and holes in opposite directions across the depletion layer ensure a zero net current with electrons flowing from cathode to anode and recombining, and holes flowing from anode to cathode across the junction or depletion layer and recombining.

Like a typical diode, there is a fixed anode and cathode in a zener diode, but it will conduct current in the reverse direction (electrons from anode to cathode) if its breakdown voltage or "Zener voltage" is exceeded.