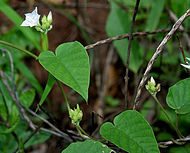 Convolvulaceae, known commonly as the bindweed or morning glory family, are a group of about 60 genera and more than 1,650 species of mostly herbaceous vines, but also trees, shrubs and herbs.

Convolvulaceae can be recognized by their funnel-shaped radially symmetrical corolla; the floral formula for the family has 5 sepals, 5 fused petals, 5 epipetalous stamens (stamens fused to the petals), and a 2 part syncarpous and superior gynoecium. The stem of these plants is usually winding, hence its Latin name (from convolvere, "to wind"). The leaves are simple and alternate, without stipules. The fruit can be a capsule, berry, or nut, all containing only two seeds per one locule (one ovule/ovary).

The leaves and starchy tuberous roots of some species are used as foodstuffs (e.g. sweet potato and water spinach), and the seeds are exploited for their medicinal value as purgatives. Some species contain ergoline alkaloids that are likely responsible for the use of these species as ingredients in psychedelic drugs (e.g. ololiuhqui). The presence of ergolines in some species of this family is due to infection by fungi related to the ergot fungi of the genus Claviceps. A recent study of Convolvulaceae species, Ipomoea asarifolia, and its associated fungi showed that the presence of a fungus, identified by DNA sequencing of 18s and ITS ribosomal DNA and phylogenetic analysis to be closely related to fungi in the family Clavicipitaceae, was always associated with the presence of ergoline alkaloids in the plant. The identified fungus appears to be a seed-transmitted obligate biotroph growing epiphytically on its host.[1] This finding strongly suggests that the unique presence of ergoline alkaloids in some species of the family Convolvulaceae is due to symbiosis with clavicipitaceous fungi. Moreover, another group of compounds, loline alkaloids, commonly produced by some members of the clavicipitaceous fungi (genus Neotyphodium), has been identified in a Convolvulaceous species, but the origin of the loline alkaloids in this species is unknown. [2]

Members of the family are well known as showy garden plants (e.g. morning glory) and as troublesome weeds (e.g. bindweed).

According to the study of D.F. Austin (see Reference) the family Convolvulaceae can be classified in the following tribes: