Lowe was born in Holbeach, Lincolnshire. He attended Dulwich College where he was a boarder in Orchard House.[2] There he edited the school magazine, the Alleynian from 1910 to 1911, as his former alumni P.G.Wodehouse had done previously. At Dulwich he excelled at a number of sports, and represented the school in boxing, athletics, swimming, cricket and rugby.[3] He captained the Athletics squad in 1911 and in the same year played for the first XI cricket squad. In this same cricket side he played alongside future England captain, Arthur Gilligan, the future Essex wicket-keeper Frank Gilligan and R K Nunes the future captain of the West Indies. Eclipsing these sporting achievements was his record as a rugby player. He was in the side first XV from 1908 and was in the unbeaten first XV rugby union squad in 1909 which contained five future internationals dubbed the 'Famous Five'.[4] These five would all go on to play in the 1913 Varsity match, (and also produced the captains of both Oxford and Cambridge in 1919), and all served in the First World War. They were Eric Loudoun-Shand and Grahame Donald who both went on to play for Scotland, W. D. Doherty who went on to play for and captain Ireland, J. E. Greenwood who went on to play for and captain England and Cyril Lowe himself. He then went on to captain the side in 1910-11. Despite his sporting prowess, Lowe was not physically imposing, standing 5'6" and weighing around eight-and-a-half stone. His small stature led to his nickname at school being "Tich" Lowe.[2] He was described by the school magazine, The Alleynian, as "A first rate centre three-quarter. Very fast, with a capital pair of hands, a first-rate dodge on a dry ground, and a good pair of feet on the wet."

Cyril Lowe, whilst still at Cambridge, was called up to play for England in 1913. This was to be the beginning of an international career that spanned either side of the First World War, in which he scored a record 18 tries in 25 internationals and was on the losing side only three times, twice to Wales and once to South Africa. He played in four Grand Slam-winning sides until his retirement in 1923. IN 1913 and 1914 he won back-to-back Five Nation Grand Slams and his eight try haul in 1914 remains a Championship record, only ever equalled by one other player, Ian Smith of Scotland.[5] His tally of tries remained a record until overtaken by another RAF pilot, Rory Underwood, in 1989.

At club level, after leaving Cambridge, Lowe represented Blackheath, and was later the RAF representative on the Rugby Union Committee. 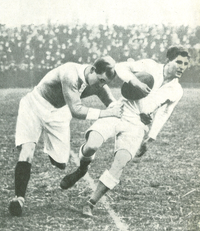 Lowe tackled by Dedet in 1913 vs France

Source for information in table below: Profile of Cyril Lowe at ESPN Scrum.com[3]

At the outbreak of hostilities in 1914 he joined the Royal Flying Corps (RFC), and flew with them.

He was wounded in action on 24 March 1917 when his F.E.2b was shot down by Reinhold Jörke.

The citation for his Distinguished Flying Cross (DFC) reads:

This officer has destroyed five enemy machines and driven down two others out of control. On one occasion he attacked two enemy triplanes, although at the time only one of his guns was serviceable; he shot down one of the machines in flames. On another occasion, while leading a formation of eight scouts he engaged a hostile formation of twenty-six machines. Having shot down a Fokker biplane he went to the assistance of one of our scouts and drove the enemy machine down to 500 feet; at this low altitude half of a blade of his propeller was shot off by fire from the ground. Supplement to the London Gazette, 3 August 1918

The citation for his Military Cross (MC) reads:

For conspicuous gallantry and devotion to duty. This officer and another pilot were escorting a formation of machines engaged on a bombing raid when seven enemy scouts attacked the bombers. They both attacked these scouts, but at the outset this officer's machine was set on fire, and the other pilot's right hand top plane broke. During the fight that ensued each came to the rescue of the other. The other pilot first caused Capt. Lowe's pursuer to break off his attack, and then Capt. Lowe shot down the scout attacking his comrade. The action of both these officers, in practically unmanoeuvrable machines, in coming to the rescue of each other in turn, showed courage and self-sacrifice of a very high order. Supplement to the London Gazette, 16 September 1918.

Lowe was credited with nine victories. He left the RAF with the rank of Group Captain.

On the cessation of hostilities in 1918 and then in 1920, Lowe returned to play for England. He retired from international rugby in 1923 with 25 caps, and would have gained more were it not for the war. He died aged 92.

His career total 18 tries remained an English record until it was equalled and later surpassed by Royal Air Force pilot Rory Underwood in 1989, 66 years after Lowe's retirement. It has subsequently been achieved by other players, though internationals are more frequent in the modern game and are generally higher scoring.