The Blood Syndicate is a fictional multicultural gang of superhumans created by Milestone Comics and published by DC Comics. The team first appeared in Blood Syndicate #1 (April 1993), and was created by Dwayne McDuffie, Ivan Velez Jr. and Denys Cowan.

In Milestone Comics' fictional city of Dakota, the Blood Syndicate is a loose affiliation of super-powered individuals brought together by circumstance; 35 issues of their eponymous comic book, written largely by Ivan Velez, Jr., were published between 1993 and 1996.

The Blood Syndicate differed from other supergroups in that they were (in Velez's words) "not a team - they're a gang". In fact, they were the surviving remnants of multiple street gangs (thus the name, a combination of "Paris Island Bloods" and "Force Syndicate"), who had gained superpowers in the so-called Big Bang, and decided to use them for a greater purpose. However, their constant in-fighting, the unsustainability of their methods, and their lack of a central vision (particularly after the death of their first leader) led to the Syndicate's eventual disintegration.

The 'Big Bang' refers to an incident where gang members from all over Dakota met in one, huge battle. Unknown to them, or even the police involved, the tear gas used to disperse them was tagged with a radioactive agent called "quantum juice." Many gang members and police officers die. Others are transformed, some according to what they are next to. Aquamaria, landing in water, gains water powers. Brickhouse merges with a brick wall and becomes brick.

Other entities are affected in other ways. Dogg, a normal canine, discovers he has cognitive abilities and develops speech. Other heroes and villains they would later encounter would prove to have gained their abilities from encounters with the gas. Some of them, such as Static, were neither gang members nor police.

The gang members eventually come together, forming a new gang. This takes some time. The original members are actually killed by Holocaust, only to be saved by Flashback. He vacillates, only to recruit Wise Son; threatening his mother in the process. Third Rail is found in a homeless camp deep below the streets, suffering from guilt over his father. Templo, through deceit, is recruited from a local church. The group meets and agrees to work together. After an initial disagreement, they agree to go by 'Blood Syndicate', a combination of the names of the two rival gangs, 'Force Syndicate' and 'Paris Bloods'.

Their first raid on a crack house, for operating capital, results in the deaths of many drug addicts and criminals and the recruitment of Masquerade. This super-powered individual had been recruited to guard the actual drugs themselves.

They meet back at their original spot, only to be ambushed by a large contingent of the local criminal element. Templo is killed outright and the gang works together, killing every single one of their attackers.

They attract the attention of Dakota's local media. The Dakota Chronicle, the city's most popular newspaper sends reporter, Roberta "Rob" Chaplik, to score an interview with the Syndicate. Chaplik follows them to a raid on a crack-house, their main source of money. She actually perishes, but the powers of Flashback save her. [1]

Initially, the Blood Syndicate's methods were violent, but they softened over the course of the series. They killed less and less. Unfortunately, this was not enough to convince the traitor Masquerade. After stealing from the team, he was not convinced they would spare his life. (Of course, 'he' is relative, as it turns out Masqerade was a woman all along.)

The Syndicate faced multiple threats and disasters. The unstable nature of their powers causes their original leader, Tech-9, to perish. The less popular Wise Son is forced to replace Tech as leader. Another gang leader, John Wing, whom they humiliate (he is actually urinated on by Wise Son) kills his wife in order to summon the 'Demon Fox.' This powerful demonic entity would prove extremely difficult to beat. He almost slays the entire team and is also able to get deep inside their heads psychologically. After his first defeat, he attempts to influence others to affect the team. Another villain, Rift, with reality-warping powers, temporary kills most of the people the Syndicate cares about, by dumping Paris Island into the ocean. These deaths lasted for some time. Eventually, Rift is manipulated into reversing the murders.

Racial tensions arise briefly as a mystical incident reveals that long-standing Syndicate member Boogieman is a shape-shifting white male. His status as a reliable member of the team is enough to make it through.

There were bright spots during the team's history. Third Rail and Brickhouse began a romantic relationship and eventually move out to start a new life together. Wise Son's little sister and son, both of close ages, develop powers of their own, teleporting long distances through mirrors. They frequently visit the team and strike up a friendship with Dogg.

The team develops money troubles due to having driven most of the crack gangs out of town, plus renovation bills. [2] They managed to find one last crack house. They decide on a raid and then more responsible use of any resulting money. The raid goes badly, leaving team member Kwai shot.

Though having moved out, Brickhouse and Third Rail's troubles are far from over. Third Rail is attacked by a gigantic villain called the 'Techno-Shaman' and is ultimately saved by Brickhouse.

Kwai recovers from her injuries but learns that she is on the last life of a series of mystically granted lives. She travels to her home realm, eventually followed by most of the Syndicate, in a desperate attempt to gain at least one more buffer life. During Kwai's troubles, Dogg deals with operatives of a murderous organization called S.Y.S.T.E.M.. who want to experiment on him and other Bang Babies. Fade and Tech-9 confront a simmering attraction for each other. Masquerade also deals with another branch of S.Y.S.T.E.M. [3]

Following the death of Darkseid (as chronicled in Final Crisis), the space-time continuum was torn asunder, threatening the existence of both the Dakotaverse and the mainstream DC universe. The being known as Dharma was able to use energies that he harnessed from Rift (upon that being's defeat in Worlds Collide) to merge the two universes, creating an entirely new continuity. Only Dharma, Icon and Superman are aware that Dakota and its inhabitants ever existed in a parallel universe.[4]

In the revised continuity, Holocaust has been defeated in battle by Static (now a member of the Teen Titans) and the similarly-powered Black Lightning (of the Justice League of America).[5]

Solicits have revealed that in February 2010, Holocaust will show up as an adversary of the Teen Titans in issue #80 of their series.[6] On the covers for issues 80 and 81, he is shown battling Aquagirl and Superboy respectively.[7] 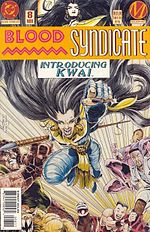 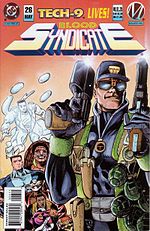