The Adventures of Robin Hood (film)

The Adventures of Robin Hood (film) 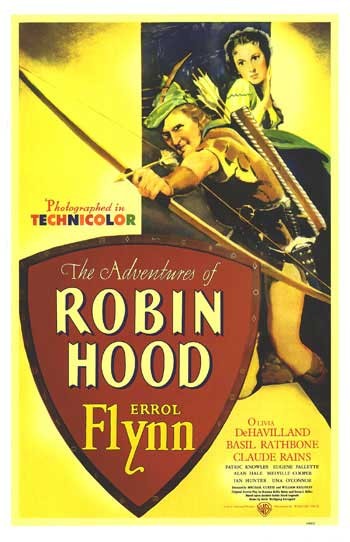 "The Adventures of Robin Hood" is an American swashbuckler film released in 1938 and directed by and . Filmed in , the picture stars , , , , , , and Alan Hale.

When Richard the Lionheart, the King of England, is taken captive by Leopold of Austria while returning from the Crusades, his brother John () takes power and proceeds to oppress the Saxon commoners. Prince John raises their taxes, supposedly to raise Richard's ransom, but in reality to secure his own position on the throne.

One man stands in his way, the Saxon Robin, Earl of Locksley (). He acquires a loyal follower when he saves Much () from being arrested by Sir () for one of the king's deer. Robin goes alone to see Prince John at Gisbourne's castle and announces to John's assembled supporters and a contemptuous Maid Marian () that he will do all in his power to oppose John and restore Richard to his rightful place. He then escapes, in spite of the efforts of John's men.

His lands and title now forfeit, Robin takes refuge in with his friend (). There they meet and recruit (). Other men join their growing band. Later, Robin provokes () into a swordfight, but then persuades the friar into joining him to provide spiritual guidance to the outlaws. Soon, Prince John and his Norman cronies find themselves harassed beyond all bearing.

One day, Robin and his men capture a large party of Normans transporting the collected taxes through Sherwood. Among Robin's "guests" are Gisbourne, the cowardly () and Maid Marian. Robin and his men "liberate" the tax money, swearing to a man to use it towards King Richard's ransom. At first, Marian is disdainful of Robin and his "band of cut-throats", but becomes convinced of his good intentions. Robin tells the humiliated Gisbourne and Sheriff that they can thank Marian for their good fortune; in deference to her, he spares their lives and lets them go.

Prince John then comes up with a cunning scheme to capture Robin. He announces an archery tournament, with the grand prize a golden arrow to be presented by Maid Marian, knowing that Robin will be unable to resist the challenge. All goes as planned; Robin identifies himself by winning the competition and is taken prisoner. Gisbourne sentences him to be hanged. However, Marian warns Robin's men, and they manage to rescue him on his way to the gallows. Later in the dark of night, Robin sneaks into the enemy castle to thank her. Marian and Robin declare their love for each other.

Meanwhile, King Richard (Ian Hunter) returns to England disguised as a monk, but is recognized at an inn by the Bishop of the Black Canons () after he overhears one of Richard's men call him "sire". The traitorous bishop hurries to inform Prince John. Upon receiving the news, John and Gisbourne plot to dispose of Richard quietly before he can raise an army. Dickon Malbete (), a disgraced former knight, is sent to assassinate him in return for the restoration of his rank and Robin's estate. Marian overhears them and writes a note warning Robin, but Gisbourne finds it and has her arrested and condemned to death for treason. Marian's nurse Bess () informs her boyfriend Much, who intercepts and kills Dickon after a desperate struggle.

Richard and his escort travel to Sherwood Forest to find Robin. When Richard is certain of Robin's allegiance, he reveals his identity. News then reaches them that John intends to have himself crowned king by the Bishop of the Black Canons.

Knowing that the castle is too strong to take by force, Robin decides to use guile, visiting the bishop and "persuading" him to include Robin and his men in his entourage. Through this ruse, they gain entry to the castle and interrupt John's coronation. A melee breaks out, during which Robin and Gisbourne engage in a prolonged swordfight. Gisbourne is finally slain, and Robin rescues Marian from her cell.

Richard is restored to the throne; he exiles his brother, pardons the outlaws, returns Robin's earldom and orders him to marry Lady Marian. Robin declares, "May I obey all your commands with equal pleasure, sire!"

"The Adventures of Robin Hood" was filmed on location in various areas of . Bidwell Park in Chico, California stood in for Sherwood Forest. Several scenes were shot at the Warner Bros. Burbank Studios.

It was produced at an estimated cost of $2 million, and was the first Warner Bros. film to be shot in the three-strip Technicolor process

A "" episode revisited Robin Hood's feat of completely splitting the arrow of a competitor in an archery tournament, but all attempts to reproduce it failed. A close analysis of the images in slow motion suggested that the arrow split in the movie was likely made of .

The film was well-reviewed and became the sixth highest-grossing film of the yearFact|date=March 2007, with just over $4 million in revenues, at a time when the average ticket price was less than 25 cents.Fact|date=March 2007 Warner Bros. was so pleased with the results that they cast Flynn in two more color epics before the decade was overFact|date=March 2007: "Dodge City" and "".

* :
** Best Art Direction, Carl Jules Weyl
** Best Film Editing, Ralph Dawson
** Best Original Score, . An excerpt for violin and orchestra, the love theme of Robin and Marian has had a separate career as a concert piece.

* In 1995, this film was deemed "culturally, historically, or aesthetically significant" by the United States and selected for preservation in their .

Due to the movie's popularity, 's name and image became inextricably linked with that of in the public eye, even more so than , who had played the role previously in 1922.

This was the third film to pair Errol Flynn and (after "Captain Blood" and "The Charge of the Light Brigade"). They would ultimately appear together in eight films.

Scenes and costumes worn by the characters have been imitated and spoofed endlessly. For instance, in the , "", Bugs is continually told by a dim-witted Little John that "Robin Hood will soon be here." When Bugs finally meets Robin at the end of the film, he is stunned to find that it is Errol Flynn, in a spliced-in clip from this film. Other parodies were and in "" and and in 's "Goofin' Hood & His Melancholy Men".

Trigger (then named Golden Cloud) was the horse ridden by Olivia de Havilland in the film. liked what he saw and bought Trigger for his own films. This eventually made Trigger one of the most famous animals in show business.