Governments have played an important part in shaping air transportation. This role began as early as 1783, when the king of France summoned the Montgolfier brothers to demonstrate their balloon. In 1892, the French War Ministry backed an attempt to build a heavier-than-air flying machine. Six years later, a military board in the United States approved a grant to assist similar efforts by Samuel P. Langley., secretary of the Smithsonian Institution. These early military grants gave a hint of how important airplanes would become in warfare, but they properly belong to the history of air power. This essay deals with the official influence on civilian flying, and it focuses on the U.S. experience.

Langley's Smithsonian was a significant source of information for those interested in the possibility of heavier-than-air flight. The Institution distributed literature about aeronautical principals as part of its scientific mission, which was partly supported by federal taxes. Among those who studied this material were Wilbur and Orville Wright, whose own experiments led them to achieve controlled, powered flight in 1903.

Despite its early start, the United States soon lost aeronautical leadership. European enthusiasm for air power was sparked by an arms race and then by the outbreak of World War I in 1914. During the following year, the United States Congress took a step toward revitalizing American aviation by establishing the National Advisory Committee for Aeronautics (NACA), an organization dedicated to the science of flight.

Upon entering World War I in 1917, the U.S. government mobilized the nation's economy, with results that included an expansion of the small aviation manufacturing industry. Before the end of the conflict, Congress voted funds for an innovative postal program that would serve as a model for commercial air operations.

With initial help from the U.S. Army, the Post Office in 1918 initiated an intercity airmail route. The subsequent achievements of the Air Mail Service included the establishment of a transcontinental route and the development of airway lighting.

In 1925, the Airmail Act of 1925 authorized the Post Office to contract with private airlines to transport mail. The Airmail Act created American commercial aviation and several of today's airlines were formed to carry airmail in the late 1920s (including Trans World Airlines, Northwest Airlines, and United Airlines).

In the early years of the 20th century aviation in America was not regulated. There were a great many accidents, especially during the barnstorming decade of the 1920s. Many aviation leaders of the time believed that federal regulation was necessary to give the public confidence in the safety of air transportation. Opponents of this view included those who distrusted government interference or wished to leave any such regulation to state authorities.

At the urging of aviation industry leaders, who believed the airplane could not reach its full commercial potential without Federal action to improve and maintain safety standards, President Calvin Coolidge appointed a board to investigate the issue. The board's report favored federal safety regulation. To that end, the Air Commerce Act became law on May 20, 1926.

The Act created an Aeronautic Branch assigned to the United States Department of Commerce, and vested that entity with the fundamental regulatory powers needed to ensure civil air safety. Among these functions were: testing and licensing pilots, issuing certificates to guarantee the airworthiness of aircraft, making and enforcing safety rules, certificating aircraft, establishing airways, operating and maintaining aids to air navigation, and investigating accidents and incidents in aviation. The first head of the Branch was William P. MacCracken, Jr., who played a key part in convincing Congress of the need for this new governmental role.

In fulfilling its civil aviation responsibilities, the Department of Commerce initially concentrated on functions such as safety rulemaking and the certification of pilots and aircraft. It took over the building and operation of the nation's system of lighted airways, a task begun by the Post Office Department. The Department of Commerce improved aeronautical radio communications, and introduced radio beacons as an effective aid to air navigation.

In 1934, the Aeronautics Branch was renamed the Bureau of Air Commerce to reflect its enhanced status within the Department. As commercial flying increased, the Bureau encouraged a group of airlines to establish the first three centers for providing air traffic control (ATC) along the airways. In 1936, the Bureau itself took over the centers and began to expand the ATC system. The pioneer air traffic controllers used maps, blackboards, and mental calculations to ensure the safe separation of aircraft traveling along designated routes between cities.

To fulfill its new aviation responsibilities, the Department of Commerce created an Aeronautics Branch. The first head of this organization was William P. MacCracken, Jr., whose approach to regulation included consultation and cooperation with industry. A major challenge facing MacCracken was to enlarge and improve the nation's air navigation system. The Aeronautics Branch took over the Post Office's task of building airway light beacons, and in 1928 introduced a new navigation aid known as the low frequency radio range. The branch also built additional airway communications stations as part of its effort to encourage broader use of aeronautical radio and to combat problems of adverse weather.

While the Aeronautics Branch was making these advances, NACA was producing benefits through a program of laboratory research begun in 1920. In 1928, for example, the organization's pioneering work with wind tunnels produced a new type of engine cowling that made aircraft more aerodynamic.

Under President Franklin D. Roosevelt, the Aeronautics Branch cooperated with public works agencies on projects that represented an early form of federal aid to airports. Budget cuts and distracting quarrels hampered the branch during this period. It achieved a more unified organizational structure, however, and in 1934 received a new name, the Bureau of Air Commerce.

The year 1934 also saw a crisis over airmail contracts that former Postmaster General Walter Folger Brown had used to strengthen the airline route structure. In the Air Mail scandal, Senate investigators charged that Brown's methods had been illegal, and President Roosevelt canceled the contracts. Army fliers experienced many accidents carrying the mail before a modified contract system was restored.

Increased commercial flying heightened the danger of midair collisions. In 1935, therefore, the Bureau of Air Commerce encouraged a group of airlines to establish the first three centers for providing air traffic control along the airways. In the following year, the Bureau itself took over the centers and began to expand the control system. 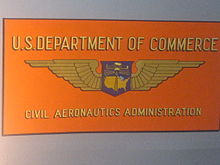 logo on side of a test aircraft 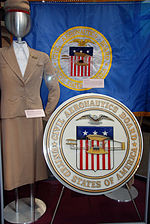 In 1940, President Franklin Roosevelt split the authority into two agencies, the Civil Aeronautics Administration (CAA) and the Civil Aeronautics Board (CAB). The CAA was responsible for air traffic control, safety programs, and airway development. The CAB was entrusted with safety rulemaking, accident investigation, and economic regulation of the airlines. Although both organizations were part of the Department of Commerce, the CAB functioned independently. When a Douglas DC-3A crashed shortly after departing Washington DC on August 31, 1940 the CAB had their first major investigation, that of the Lovettsville Air Disaster set the pattern for subsequent accident investigations.

In 1942, President Franklin Delano Roosevelt appointed L. Welch Pogue as Chairman of the Civil Aeronautics Board. Pogue served as Chairman until 1946. During his tenure he helped strike down a plan for a single world airline.

After World War II began in Europe, the CAA launched the Civilian Pilot Training Program to provide the nation with more aviators. On the eve of America's entry into the conflict, the agency began to take over operation of airport control towers, a role that eventually became permanent. During the war, the CAA also greatly enlarged its en route air traffic control system. In 1944, the United States hosted a conference in Chicago that led to the establishment of the International Civil Aviation Organization and set the framework for future aviation diplomacy.

In the post-war era, the application of radar to air traffic control helped controllers to keep abreast of the postwar boom in air transportation. In 1946, Congress gave the CAA the task of administering a federal-aid airport program aimed exclusively at promoting development of the nation's civil airports.

The approaching era of jet travel, and a series of midair collisions, prompted passage of the Federal Aviation Act of 1958. This legislation gave the CAA's functions to a new independent body, the Federal Aviation Agency. The act transferred safety rulemaking from CAB to the new FAA, and also gave the FAA sole responsibility for a common civil-military system of air navigation and air traffic control. The FAA's first administrator, Elwood R. Quesada, was a former U.S. Air Force general who commanded the early tactical air forces of the Ninth Air Force in Europe in World War II, and served as an advisor to President Dwight D. Eisenhower.

The same year witnessed the birth of the National Aeronautics and Space Administration (NASA), created in the wake of the Soviet Union's launch of the first artificial satellite, Sputnik. NASA assumed NACA's role of aeronautical research while achieving world leadership in space technology and exploration.

Department of Transportation and airline deregulation

The accident investigation powers of the Civil Aeronautics Board were transferred to the new National Transportation Safety Board in 1967, at the same time that the United States Department of Transportation was created.

The CAB's remaining authority was to function as a public utilities commission, controlling the routes airlines were allowed to run, and the fares they were allowed to charge. The Airline Deregulation Act of 1978 phased out these controls, resulting in the elimination of the CAB at the end of 1984.[1]

As the 21st century began, issues facing the FAA included the progress of reforms aimed at giving the agency greater flexibility. Airline accidents, although rare in statistical terms, showed the need for further safety advances. The huge volume of flights challenged the capacity of the airport system, yet demonstrated the popularity of air travel. The September 11, 2001 attacks challenged the air transportation system by presenting a new type of terrorist attack: hijacked airliners were used as missiles that killed thousands of people. The government's response included the USA PATRIOT Act, enacted in November, that established a new DOT organization. The Transportation Security Administration received broad powers to protect air travel and other transportation modes against criminal activity.

This article incorporates public domain material from websites or documents of the Federal Aviation Administration.