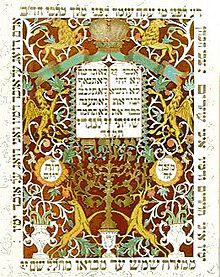 In Judaism, mizrah (Hebrew: מזרח "east") is the direction that most Jews in the diaspora face during prayer, as Jewish law prescribes that Jews face the site of the Temple in Jerusalem during prayer, and most Jews in the diaspora live west of Jerusalem, so they face eastward during prayer. The word "mizrach" also refers to the wall of the synagogue that faces east, where seats are reserved for the rabbi and other dignitaries. In addition, "mizrach" refers to an ornamental wall plaque used to indicate the direction of prayer in Jewish homes.

The Talmud lays down the rule that if one prays in the Diaspora, he shall direct himself toward the Land of Israel; in Israel, toward Jerusalem; in Jerusalem, toward the Temple; and in the Temple, toward the Holy of Holies. The same rule is found in the Mishnah; however, it is prescribed for individual prayers only rather than for congregational prayers at a synagogue. Thus, if a man is east of the Temple, he should turn westward; if in the west, eastward; in the south, northward; and if in the north, southward.

The custom is based on the prayer of Solomon (I Kings 8:33, 44, 48; II Chron. 6:34). Another passage supporting this rule is found in the Book of Daniel, which relates that in the upper chamber of the house, where Daniel prayed three times a day, the windows of which were opened toward Jerusalem (Dan. 6:10).

The Tosefta demands that the entrance to the synagogue should be on the eastern side with the congregation facing west. The requirement is probably based on the orientation of the tent of meeting, which had its gates on the eastern side (Num. 2:2–3; 3:38), or Solomon's Temple, the portals of which were to the east (Ezek. 43:1–4). Maimonides attempted to reconcile the Tosefta's provision with the requirement to pray toward Jerusalem by stating that the doors of the synagogue should face east, while the Ark should be placed "in the direction in which people pray in that city," i.e., toward Jerusalem. The Shulkhan Arukh records the same rule, but it also recommends that one turn toward the southeast instead of east to avoid the semblance of worshiping the sun.

If a person is unable to ascertain the cardinal points, he should direct his heart toward Jerusalem.

Excavations of ancient synagogues show that their design generally conformed with the Talmudic and traditional rule on prayer direction. The synagogues excavated west of Eretz Israel in Miletus, Priene, and Aegina all show an eastern orientation. Josephus, in his work Against Apion, recorded that the same was the case for Egyptian synagogues. Synagogues north of Jerusalem and west of the Jordan River, as in Bet Alfa, Capernaum, Hammath, and Khorazin, all face southward, whereas houses of worship east of the Jordan all face west. In the south, the synagogue excavated at Masada faces northwest to Jerusalem. The Tosefta's regulation that the entrance to the synagogue should be on the eastern side, while the orientation of the building should be toward the west was followed only in the synagogue in Irbid.

Initially, the mizrah wall in synagogues was on the side of the entrance. However, the remains of the Dura-Europos synagogue on the Euphrates reveal that by the 3rd century C.E. the doors were on the eastern side and the opposite wall, in which a special niche had been made to place the scrolls during worship, faced Jerusalem. In Eretz Israel, the wall facing the Temple site was changed from the side of entrance to the side of the Ark in the 5th or 6th century. This change is found in synagogues at Naaran, near Jericho, and Bet Alfa. Worshipers came through the portals and immediately faced both the scrolls and Jerusalem.

Exceptions to the requirements of the Halakha still occur. The directions of the buildings frequently varied slightly due to the terrain. In the synagogues at Khirbat Summaqa, a village on the Mount Carmel, and at Usifiyya, where the orientations are not toward Jerusalem, and there is no satisfactory explanation for this divergence from the norm. With one exception, the ruins of synagogues in the Galilee were oriented from north to south, i.e. away from Jerusalem; most probably, the decision was made out of consideration for how the building would look from a distance. In Europe, synagogues were usually oriented toward the east, i.e. not exactly toward Eretz Israel, and congregations were very meticulous in choosing sites that would enable an eastward orientation.

It is customary in traditional Jewish homes to mark the wall in the direction of mizrah to facilitate proper prayer. For this purpose, people use artistic wall plaques inscribed with the word mizrah and scriptural passages like "From the rising (mi-mizrah) of the sun unto the going down thereof, the Lord's name is to be praised" (Ps. 113:3), kabbalistic inscriptions, or pictures of holy places. These plaques are generally placed in rooms in which people pray, such as the living room or bedrooms.

Influence on other religions