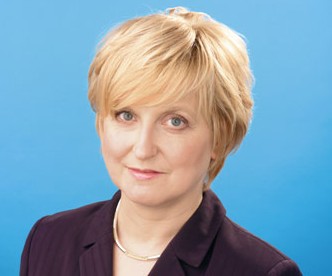 Anna Elżbieta Fotyga (pronounced|ˈanːa ɛlˈʒbʲɛta fɔˈtɨɡa, née Kawecka, born , in ) is a Polish economist, politician, former and former Minister of Foreign Affairs of , in the successive cabinets of and . She is Poland's first female to serve in the role.

Fotyga is a graduate of the and the .

In 1981, and again after 1989, she acted as manager of the Foreign Office of the headquarters in , and was a close associate of . From 1997 to 2001, Fotyga served as a foreign affairs adviser under then Prime Minister . Later she was deputy chairman of the Supervisory Board of Social Security (Zakład Ubezpieczen Spolecznych, ZUS) with special expertise concerning (Międzynarodowa Organizacja Pracy) and the . From 2002 to 2004, she was deputy mayor of .

Fotyga garnered 25,994 votes (second highest in the region) in the 2004 European parliamentary elections as a candidate of in the .

On , Anna Fotyga was appointed Minister of Foreign Affairs of Poland by President Lech Kaczyński, replacing . The left-wing opposition criticised her office as isolating Poland against and . On September 7, 2007 Fotyga was dismissed from her post but re-appointed again on the same day; in this way the Prime Minister and President avoided her being dismissed by a vote of censure prepared by three months earlier.

Her take on foreign affairs is congruent with the policy stance of , based on the concept of Poland as a strong, independent country, willing to confront Germany or Russia when necessary. She has also pursued a policy of close alignment with the U.S..

With the fall of the Kaczynski administration in 2007, she was succeeded by as foreign minister of Poland.

She is presently Chief of the .