Bring it on! (manhwa)

Bring it on! (manhwa)

Infobox manhwa
name = Bring It On! 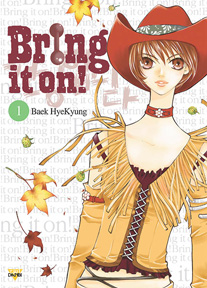 Schoolgirl Miha is the ultimate tomboy: she loves sports, is very competitive, and acts brashly. She wasn't always like this, as she was trained by her brother at an early age so she would scare off any would be suitors. One early morning at her school, after her morning run, she discovers a beautiful boy asleep on the floor of the girls' locker room. He awakes to see Miha in a state of undress (it is the "girls" locker room after all!) and accuses her of doing something perverted to him. Angry, Miha knocks him unconscious in one blow. Not knowing what to do with him, she stuffs him into a cab and sends him off into the streets. Little did she know that she would see him again shortly-as her classmate Seung-Suh.

Miha:Tomboyish, athletic, and rough would be some of the words used to describe Miha. She is very loyal to her family and friends, and will go out of her way to repay a debt. Her brother trained her from a very young age to be strong and romantically unappealing to guys, since he would otherwise have had to take care of her until she was married. Miha works part-time in her mother's beauty salon for tips, and can do simple cuts and styles. Once she even cut Seung-Suh's hair, even though she was tempted to shave it all off. She is mysteriously subservient to her cousin Yun-Jin, and refuses to tell anyone why she is doing so. Whenever Miha is upset she always likes to work out her frustration through physical activities, such as sports or even cleaning. She is more attracted to Seung-Suh than she would like to admit. Even though the two of them started off horribly, she is starting to see nicer sides to him than she thought existed.

Seung-Suh:Beautiful, but dangerous, Seung-Suh came to school with a reputation for being dangerous. Angry at Miha, he decides to try to get even with her-with mixed results. He can be extremely petty, but Seung-Suh also has a sweeter side to him. He was willing to rescue Miha from a group of guys who were trying to strong arm her into going with them. (Although his good deed went punished, as he saved her by telling them she was a guy in drag.) Seung-Suh lives by himself, and his apartment is always trashed, even though he has a maid that comes in often to clean. He is addicted to Korean Pocki.

;Yun-Jin:With a porcelain face that men would (and have) fought over, Yun-Jin is the most desired girl at school. However, her beautiful face comes with a price: All of the girls at school hate her for it. On any given day she can find her locker trashed or her gym outfit torn to pieces. It's not to say that she hasn't done something to deserve it partially, since she also has a terrible attitude under that perfect complexion. Yun-Jin also treats her cousin Miha like a slave, for reasons she will not divulge. It may have to do with an incident in her past concerning Miha. Yun-Jin lived with Miha's family for a while when she was in elementary school after her father's death. Yun-Jin's father had been an and had been beating Yun-Jin for a very long time. Due to their pride, Yun-Jin and her mother hid the bruises from the rest of the family. As a result Yun-Jin also suffered s whenever faced with violence. Miha's mother spoiled Yun-Jin because of this, and took Yun-Jin's side in any argument, as well as giving away many of Miha's possessions. In one instance Miha's mother gave away her favorite doll, and when Miha tried to reclaim it, Yun-Jin had a seizure, and Miha got scolded. Naturally this was incredibly frustrating for Miha. Yun-Jin also idolized Miha, and would follow her without question. Frustrated, Miha took Yun-Jin back to her old house with the intention of leaving her there, but Yun-Jin had a seizure. Scared, Miha ran off and Yun-Jin wandered the streets for days, eventually ending up in the hospital after an accident. It is unknown whether she still bears a grudge towards Miha because of this, or because of other factors. Yun-Jin does not like Seung-Suh approaching Miha, especially because he keeps telling Yun-Jin to start taking care of herself and to stop relying on Miha. She is willing to do almost anything to keep them apart.

;Mu-Jin:He is Seung-Seh's best friend, and it is rumored that they have an even "closer relationship". He is the only one who can calm Seung-Seh down when he gets angry. Mu-Jin is rumored to be part of a gang with Seung-Seh, and is good at fighting. He is very good looking and is the love interest of many girls, especially Miha's best friend, Ki-Ri. Mu-Jin is relatively quiet, though, and does not seem to take an apparent interest in girls, fueling the rumors about him and Seung-Seh. He is very observant of Seung-Suh's moods, and is the first to tell Seung-Seh that he is very relaxed around Miha. What he truly thinks of this is unknown.

;Ki-Ri:Miha's best friend and confidant. She has an innocent face, but a dangerous past. Ki-Ri was formerly part of a vicious girl gang, but left it due to reasons of her own. Miha met her after she left, so it is hard for her to picture her friend in a gang. Ki-Ri despises Yun-Jin for her treatment of Miha, but is tolerant of Seung-Seh, since she thinks that he and Miha are secretly in love with each other. A huge fan of fanfic, she often spends late nights reading when she should be sleeping or studying. She and Miha can often be found singing after school in their spare time. Ki-Ri is also infatuated with Mu-Jin, and will take any opportunity to be close to him.

;Yang-Ha:Miha's older brother. He is the one who trained Miha from a young age to be a . Yang-Ha did so, however, because he was afraid of having to take care of her until she gets married. His mother would make him do all the work as a child (to the point where he had heavily ed hands) while she would pamper Miha. It could be said that it was entirely self defense. He is also very protective of her at the same time, and hates the idea of her dating guys entirely. Yang-Ha sees himself as a ladies' man, at least in his own mind.

; Mrs. Lee:Miha and Yang-Ha's mother, and a successful owner of a salon. She has a very warped view of men, with her opinion being that men will treat you like a queen when you are dating, but will ignore you after marriage. She has said that she would rather have eye candy than a substantial relationship. Her husband is so far unseen in the manhwa, so it is unknown if she is widowed or divorced, but her attitude suggests a messy split. She was very hard on Yang-Ha when he was younger, making him do all of the housework, causing his actions towards Miha. When she was younger, she was a famous fanfic writer named 'Liv Whitney', much to the delight of Ki-Ri. (Husband appears in vol.3, and sais she is still in love with him. Still together not broken up.)

;Grandmother:She is the Grandmother of Miha,Yang-Ha, and Yun-Jin. She was formerly a strict disciplinarian, but because of some medications given to her by her doctor she has reverted to a child-like state. Grandmother will have some lucid moments, but so far the only ones who have seen it are Yun-Jin (whom she was comforting) and Seung-Suh (who was spying). She is infatuated with Seung-Suh, and takes any opportunity to grope him. She is also obsessed with a children's show, Dunno What To Do Dong Dong Show. In the 3rd volume she has regained her normal composure.

:;Volume 1:After her daily morning run to school, Miha heads into the girls' locker room to shower. Upon entering she sees an unconscious boy on the floor, which she naturally assumes is a pervert. Miha manages to wake him, but after he assumes that *she's* the pervert (he saw that her top was open) Miha knocks him unconscious. Nervous, she sends him on a cab ride to nowhere. Little does she know that this guy was Seung-Suh, well known for his attitude and fighting prowess. Seung-Suh uses his beauty and skills to make Miha's life miserable. But is he trying to make her miserable, or is he trying to hide his growing attraction to her?chapter 1: Miha after running to school takes a shower only to find a handsome guy lying down on the girls shower room.

:;Volume 2:Miha has broken Seung-Suh's arm, and has been told that she must take care of him until it is healed. However, where many would think this a prime chance for love to bloom, Miha does everything she can to make Seung-Suh as miserable as possible. On top of having to care for Seung-Suh, Miha's Grandmother has arrived, and has reverted to a child-like state! Also, Seung-Suh has started to question Miha and Yun-Jin's relationship to each other. Why does Yun-Jin treat Miha like a slave?

:;Volume 3:Mysteries behind Yun-Jin and Miha's relationship are starting to become answered. Can you make amends for mistakes made in your childhood? Miha tries to avoid Seung-Suh, believing that Yun-Jin is in love with him. However, is Yun-Jin in love with Seung-Suh, or is she merely trying to keep Miha all to herself? Seung-Seh thought that Miha's anger was bad, but can he withstand the wrath of Yun-Jin?

:;Volume 4:How can this be?! Seung-Suh is trapped in Yun-Jin's brilliant plot, and it seems like there's no way to escape. Thinking it might be better to face the problem rather than run from it, Seung-Suh goes and apologizes to Mi-Ha only to be flattened by her mighty punch! Will this really be the end between the two of them? Find out more in the fourth volume of the series!

*Korean "Pokki" may at first be thought of as to be the same as Japanese but the Japanese copied them "." However, they are completely different. Pocki is a thin wafer stamped with a shape in the middle. Old fashion stores and vendors often give free pokki if you can eat around the shape without cracking the pokki. You can do this at home with sugar and pokki cutters, of which the character Seung-Seh has a complete set.

* [http://www.animenewsnetwork.com/encyclopedia/manga.php?id=6078 "Bring It On!"] at Anime News Network