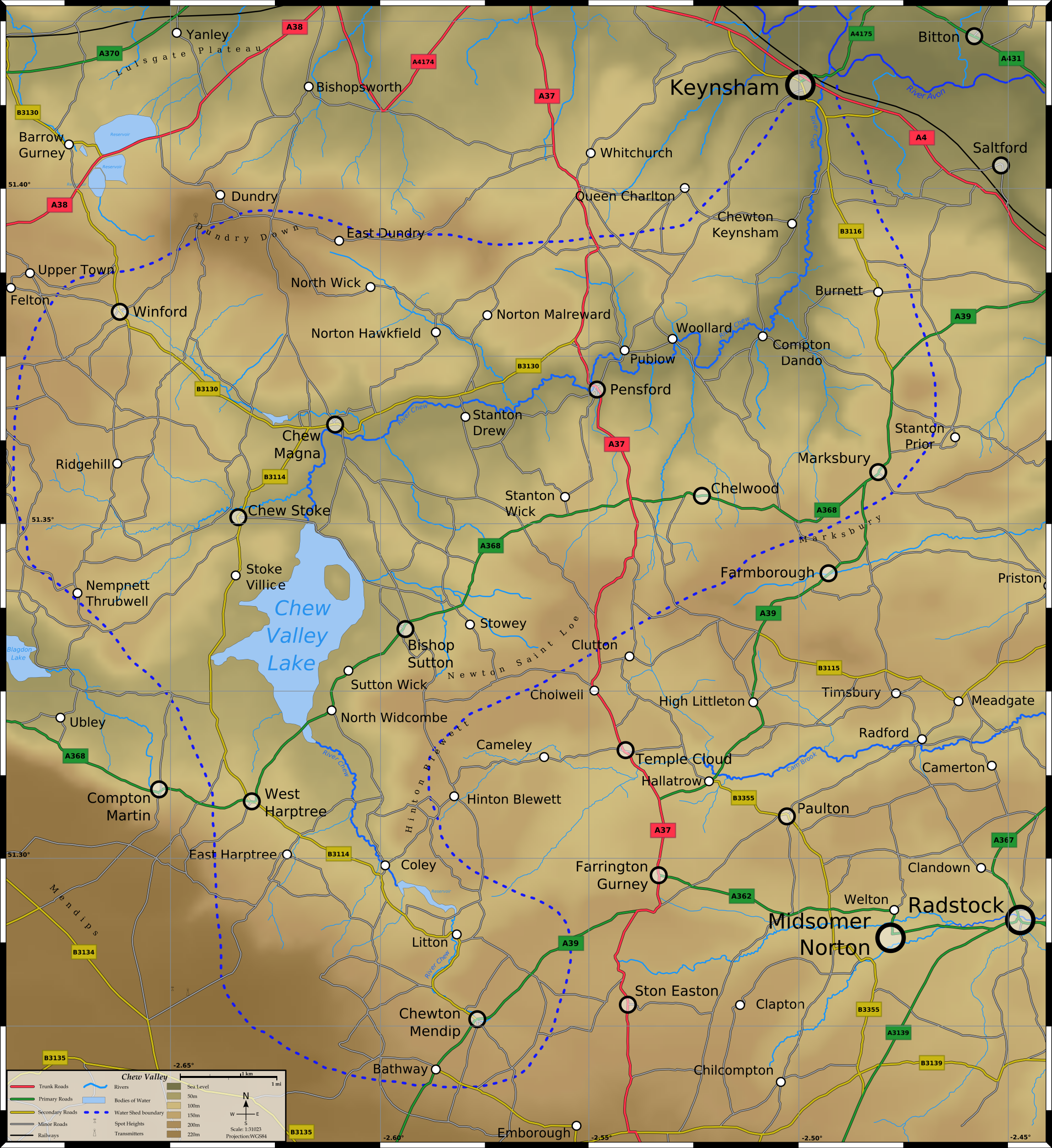 map_size =
map_caption = Topographical map of the

The River Chew is a small in . It merges with the River Avon after 17 miles forming the .

The spring from which the Chew rises is just upstream from . The river flows North West from Chewton Mendip through Litton, , , and Stanton Drew. The river passes under the A37 at almost making the old church and pub garden into an island. The river then flows through the villages of , , and before joining the River Avon at . For much of the Chew's route the Two Rivers Way footpath is alongside, the same route for part of its length is also part of the long distance footpath. In total the Chew flows for some 17 miles through the North Somerset countryside.

The name 'Chew' has Celtic origins, but its exact meaning isn't certain, however there have been several explanations, including "winding water", [cite web | title=History of the River Chew | work=River Chew Web Site | url=http://www.riverchew.co.uk/history.htm | accessdate=2006-07-03] the EW being a variant of the French EAU meaning water. The word CHEWER is a western dialect for a narrow passage and CHARE is Old English for turning. Many believe that the name CHEW began in Normandy as CHEUX, and came to England with the Norman Conquest during the 11th century. [cite web | title= Normandy, France - Ancestor's Stories | url=http://freepages.genealogy.rootsweb.com/~debbie/stories/normandy.html | accessdate=2006-07-03]

However, some people agree with Ekwall’s interpretation that it is derived from the Welsh "cyw" meaning "the young of an animal, or chicken", so that "afon Cyw" would have been "the river of the chickens". [cite book | author=Ekwall, Eilert | year = 1928 | title=English River-Names | publisher= Oxford University Press | id =ISBN 0-19-869119-X]

Other possible explanations suggest it comes from the Old English word cēo ‘fish gill’, used in the transferred sense of a ravine, in a similar way to Old Norse gil, or possibly a derogatory nickname from Middle English chowe ‘chough’, Old English cēo, a bird closely related to the crow and the jackdaw, notorious for its chattering and thieving. [cite web | title=What we know about the Chew Family | url=http://www.ancestry.com/search/SurnamePage.aspx?html=b&ln=Chew&sourcecode=13304 | accessdate=2006-07-03] According to Robinson it is named after the Viking war god . [cite book |last=Robinson |first=Stephen |authorlink= |coauthors= |title=Somerset Place Names |year=1992 |publisher=The Dovecote Press Ltd |location=Wimbourne |isbn=1874336032]

The river suffered a major flood in 1968 with serious damage to towns and villages along its route, including sweeping away the bridge at . [cite web | title=The great flood of 1968 | work=Memories of Bristol | url=http://weldgen.tripod.com/the-great-flood-1968/index.html | accessdate=2006-01-04]

On 10-11 July a storm brought heavy rainfall to the Valley, with convert|175|mm|in|0|lk=on falling in 18 hours on Chew Stoke, double the areas average rainfall for the whole of July.

Fishing rights for the Millground and Chewton sections of the river are owned by [http://www.keynsham-angling.co.uk/chew.htm Keynsham Angling Club] . The Mill Ground stretch of the River Chew consists of the six left-bank fields (looking downstream) from Chewton Place at Chewton Keynsham to the Albert Mill, . The water is home to a good stock of sizeable Chub, Roach, and , along with good numbers of Gudgeon, Dace and Trout. In the Chewton section waters are much more 'wild' than the Mill Ground, with overhanging trees and fast-flowing runs, leading to deeper eddies and pools. Not all swims are fishable and some will need hacking out before angling, but this is a classic roving river. Trout, Grayling and Chub lurk in the shady, meandering stream, along with a good showing of Dace, Roach and Eel.

Any Flood alerts for this river are available from the [http://www.environment-agency.gov.uk/subjects/flood/floodwarning/3G2a Environment Agency River Chew from Chewstoke to Keynsham page]