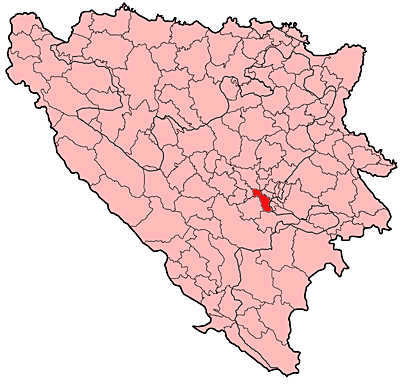 Ilidža (: "Илиџа") is a town and municipality in central . It has a metro population of 157,654, making it the 7th largest city in the country. Ilidža is the chief of . It is famous for the natural beauty of its surroundings and historical tradition dating back to times. is located nearby, as is the famous spring.

"One of the prettiest places on the Earth ", as E.B.Lanin wrote in in in .

Ilidža is known to have a pleasant and attractive geography. The city itself is built on fairly level ground, although it is surrounded by mountains. The biggest and most famous is mount , whose 1502 meter peak towers above the city. On the mountain grows the "Lillium Bosniacum", a branch of the of flowers that is a historical symbol of Bosnia. The area is rich in especially in the neighborhood.

The Željeznica river, a tributary of the Bosna, passes through the center of the city. The Bosna itself passes through Ilidžas outskirts. Its spring, , is found a few kilometers to the west of city center and is a popular . A number of smaller streams also pass through the city's area.

A number of horticulture projects have been undertaken in the history of Ilidža. The city is today very rich in trees. The total area of the city's parks is about 50% of that of Sarajevo, which has six times its population. In , an article in a newspaper called Ilidža "One of the most beautiful places in the world".

Ilidža is one of the longest continuously inhabited regions in . Since the 19th century, numerous archeological finds have been made in the neighborhood, dating from times. The so called "Butmir culture", is one of the best documented Neolithic cultures in of the 26th and 25th centuries BC.

During Roman times, the Ilidža area was the location of the town . This was a Roman colony, and the main settlement in all of at the time. Today numerous traces of have been found, such as s, s, , s, and even structural remains.

During times, the Ilidža area was part of the Bosnian province of "Vrhbosna". "Katera", one of the two original Bosnian towns mentioned by in , was found on the ground of today's Ilidža municipality. The disciples of and considered the area important enough to stop by and build a church in the area.

The modern town of Ilidža as we know was founded during the Ottoman rule of Bosnia. Its name derives from the Turkish word "Ilıca", meaning "warm thermal springs". ( is also the name of a district of , a southeast city of .) Numerous elements of found their way into Ilidža, such as a number of homes from the 15th and 16th centuries that have survived to this day. Numerous and s were also built at this time.

Ilidža, like the rest of Bosnia, experienced and with the coming of . A and tracks, , and various other made Ilidža the most important town after in the region. This continued into the as Ilidža continued to grow and develop.

Before , Ilidža was populated mainly by the 47,21% and 31,58% . When war started in until the the municipality was divided between (Hrasnica, Sokolovic Kolonija, Butmir) and (Ilidza, Kotorac, Vojokovici, Grlica) parts. When, under the terms of the Accord, Ilidža was placed within the territory of the , the vast majority of fled the city to live in the , destroying some buildings as they did so. Some of those who remained were harassed and otherwise intimidated by an influx of , many of whom had lost their homes in or been evicted from -held territory elsewhere. From 1996, Ilidža was home to the headquarters of the peacekeeping force (later and ) before its move to nearby in the year . During this period, the hotels Terme, Srbija (), Bosna (Bosnia) and Jadran were barricaded and the area used as HQ. Today Ilidža remains a bustling, largely -dominated town. Vojkovici and Grlica formed Eastern Ilidza Municipality which is dominated by .

The Ilidža Municipality consists of the core of the city of Ilidža, as well as the outlying small neighborhoods (by size Hrasnica, Sokolovic Kolonija, Butmir, Kotorac), which although somewhat separated from the city center are still considered part of the city.

In 2005, 84% of population of the municipality were ethnic Bosniaks.

Ilidža is widely considered a unique city, but is also thought of as an almost fully incorporated of Sarajevo. As far as its own government goes, cities in Bosnia and Herzegovina typically do not have a normal "city government". Instead, the (Such as Ilidža Municipality) are based on major settlements and their surroundings. Thus the Ilidža Municipality government is the de facto government of Ilidža.

The current mayor of Ilidža is Amer Ćenanović. Through the municipality government, Ilidža also has its own legislative bodies.

Prior to the war, Ilidža municipality was one of the five strongest in Bosnia and Herzegovina, and one of the ten strongest in the whole of Yugoslavia. The war had a devastating effect on the city's economy, but today it is slowly starting to recover. Several important local companies are based in Ilidža. The city's economy is based on food processing, , and .

One of the most important parts of Ilidža economy is its tourism. The natural beauty of the area is used to the city's advantage, attracting many from both abroad and as near as neighboring Sarajevo. There are plans for future development to enhance tourism, including hotels and a cable railway line to Mt. Igman.

Ilidža has many advantages as far as tourism is concerned. is located just a few kilometers from the city. The regions natural beauty is quite a draw to tourists as well. mountain is a popular destination for and , and is one of the country's most popular parks. Hotel Ilidža in the city can accommodate a number of guests, and if there is no room tourists can simply find a room in one of Sarajevo's hotels and make the short trip to Ilidža. Historical sites are also key in Ilidža tourism. The "Rimski Most" ("Roman Bridge") over the Bosna river was built in the using actual Roman stones. The nearby restaurant is one of many popular eating spots in the city.