Sharon Ventura is a fictional character, a comic book superheroine from the Marvel Comics universe. Created by Mike Carlin and Ron Wilson, the character first appeared in Thing #27 (September 1985). For awhile she answered to the pseudonym Ms. Marvel (used by Carol Danvers), and has served as a member of the Fantastic Four and the female wrestlers known as the Grapplers.

Sharon Ventura met the Thing, who was involved with the Unlimited Class Wrestling Federation (UCWF) at the time.[1] Inspired by him, she signed up for the Power Broker's program in order to have her strength augmented and join the UCWF. The Power Broker (actually Curtiss Jackson), employed Dr. Karl Malus to create super-powered wrestlers for his competitions. Sharon was unaware of the criminal activities of Jackson or Malus. While boosting their subjects' strength, the pair addicted the subjects to a drug, ensuring their obedience. It has been implied that she was raped while a prisoner of Malus, which caused her to temporarily develop an intense hatred and distrust of men. Sharon managed to break free before Malus administered the drug. She adopted the costume which UCWF minder Ann Fraley (Auntie Freeze) had arranged for her, taking the name Ms. Marvel. Alongside the Thing, she battled the Grapplers and the UCWF wrestlers.[2] She then battled the She-Hulk.[3] 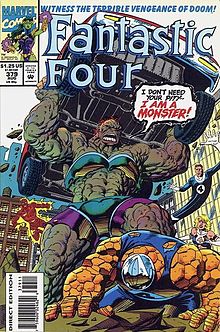 Years later, She-Thing had a guest appearance in Marvel Knights 4, a spinoff of the main Fantastic Four book. The appearance established that she was indeed alive and well in the Marvel Universe and her attire implied she was still residing with Wingfoot. Her absence was poked fun at, as she stated that she couldn't believe anybody still had her number.

Sharon Ventura was later seen again in her She-Thing form.[19]

Someone wearing Sharon Ventura's 'Ms. Marvel' costume appeared in a comic during the Civil War along with other heroes refusing to register under the Superhuman Registration Act. The heroes' location was raided and many were captured.[volume & issue needed] According to volume 12 of the Official Handbook of the Marvel Universe A-Z, this was Sharon's Skrull imposter.

During the Secret Invasion, Sharon seemingly appeared in her "She-Thing" persona. However, she was revealed to be another Skrull imposter and killed by the Skrull Kill Krew.[20] The real Sharon is recovered alive from a downed Skrull ship after the final battle of the invasion.[21]

Sharon is later shown in a support group meeting with the others that had been replaced by Skrulls.[22]

Sharon is highly proficient in hand-to-hand combat, and skilled at various martial arts, including Tae Kwon Do and American boxing. She is also an expert stuntwoman, scuba diver, skydiver, motorcyclist, mountain climber, skier, lion-tamer, and wrestler. She attended a military academy until she was expelled.

In the alternate timeline of MC2, Sharon is human again, she and Ben were married, and have twin children, Alyce and Jacob, although they later divorced. Sharon Ventura appears in the 2007 Fantastic Five limited series.