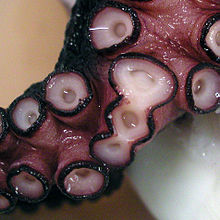 A deformed sucker cluster on an arm of an octopus

A deformity, dysmorphism, or dysmorphic feature is a major difference in the shape of body part or organ compared to the average shape of that part. Deformity may arise from numerous causes:

Deformity can occur in non-humans, as well. Frogs can be mutated due to Ribeiroia (Trematoda) infection.

In many cases in which a major deformity is present at birth, it is the result of an underlying condition severe enough that the baby does not survive very long. The mortality of severely deformed births may be due to a range of complications including missing or non-functioning vital organs, structural defects that prevent breathing or eating, and high susceptibility to injuries or infections that lead to death.

Mythological creatures may have been created due to a deformative syndrome also, for instance, descriptions of mermaids may be related to the symptoms of sirenomelia. The Irish Mythology includes the Fomorians, who are almost without exception described as being deformed, possessing only one of what most have two of (eyes, arms, legs, etc.) or having larger than normal limbs.