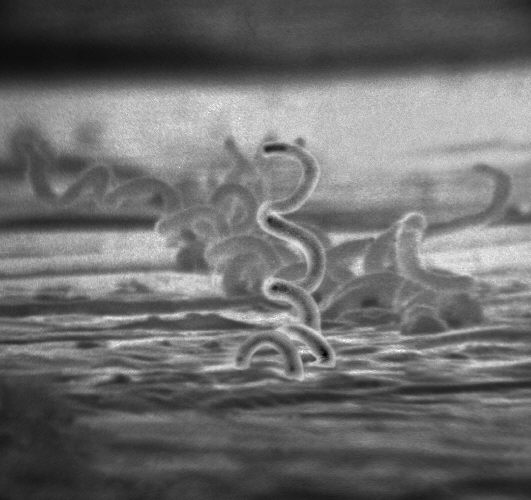 "T. pallidum pallidum" is a motile spirochaete that is generally acquired by close sexual contact, entering the host via breaches in squamous or columnar epithelium. The organism can also be transmitted to a fetus by transplacental passage during the later stages of pregnancy, giving rise to congenital syphilis. The helical structure of "T. pallidum pallidum" allows it to move in a corkscrew motion through viscous mediums such as mucus. It gains access to host's blood and lymph systems through tissue and mucus membranes.

The subspecies causing , pinta, and are morphologically and serologically indistinguishable from "T. pallidum pallidum" (syphilis); however, their transmission is not venereal in nature and the course of each disease is significantly different.

In the , issue of the journal "Science", a group of biologists reported how they sequenced the of "T. pallidum". The recent sequencing of the genomes of several spirochetes permits a thorough analysis of the similarities and differences within this bacterial phylum. "Treponema pallidum" subsp. pallidum has one of the smallest bacterial genomes at 1.14 million base pairs (Mb) and has limited metabolic capabilities, reflecting its adaptation through genome reduction to the rich environment of mammalian tissue.

There is no vaccine for syphilis. The outer membrane of "T. pallidum" has too few surface proteins for an antibody to be effective. Efforts to develop a safe and effective syphilis vaccine have been hindered by uncertainty about the relative importance of humoral and cellular mechanisms to protective immunity and the fact that "T. pallidum" outer membrane proteins have not been unambiguously identified.