Claudio Marchisio (Italian pronunciation: [ˈklaudjo marˈkizjo]; born January 19, 1986 in Chieri, Province of Turin) is an Italian footballer who plays as a midfielder for Serie A club Juventus and the Italian national team. A product of the Juventus youth system, he has spent his whole career thus far at his hometown club, with the exception of a season-long loan spell at Empoli. Since the 2009-10 season, he is fourth choice captain, behind Del Piero, Buffon and Chiellini. 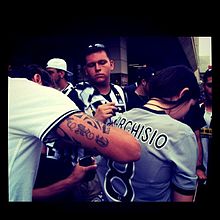 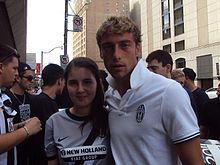 Since making his breakthrough in the 2008–09 season, Marchisio has often been compared to former Juventus and Italy midfielder Marco Tardelli by the Italian press for his tenacious style of play and good reading of the game.[1][2][3] A hard-tackling, versatile midfielder, he is able to play in defensive midfield or out wide but his preferred and most effective position is in the centre.[4] Though predominantly right-footed, he possesses a powerful shot in both feet, hence his penchant for attempting shots on goal from outside the penalty box if given the chance.

Marchisio was born and raised in Chieri, a comune not far from Turin, to a family of Juventus fans from neighbouring Andezeno.[5] His family were season ticket holders and he used to be a ball boy at the Stadio Delle Alpi. As a child, he developed an interest in football and was scouted during an audition match at one of Fiat's satellite sports clubs Sisport before joining the Juventus youth system as a seven-year-old.[6][7]

While in the youth system, Marchisio played as a trequartista (second striker), modeling himself after his childhood hero Alessandro Del Piero, until he was switched to the midfield at age sixteen. During the 2004-05 and 2005–06 seasons, he was called-up to train with the first team numerous times by Fabio Capello and given a squad number. He made the bench for the game away at Cagliari but remained an unused substitute. Later that season he captained the Primavera side to their first Campionato Primavera title in twelve years and a runner-up finish at the Viareggio Tournament in his last full season with the Primavera squad.

After being included in the preseason friendlies, Marchisio was promoted to the first team permanently following Juventus' relegation to Serie B due to the Calciopoli scandal and given the number 15 shirt. On 19 August 2006, he made his first team debut in the Coppa Italia third round, coming on as a late substitute for Matteo Paro in a 3–0 win over A.C. Martina. In September, he captained the Primavera team for the last time in the Supercoppa Primavera, thrashing old rivals Internazionale 5–1.[8] He then made his league debut on 28 October against Frosinone as a late substitute for David Trézéguet and made his first start in the following match against Brescia. As the season progressed he established himself in Didier Deschamps' side and ended the season as first-choice central midfielder. He capped a fine season with an assist for Del Piero's match opener in the 5-1 thrashing of Arezzo[9], a result which secured immediate promotion to Serie A mathematically.

On 25 July 2007, Marchisio was loaned out to Empoli for the 2007–08 season along with teammates Sebastian Giovinco and Rej Volpato to gain first-team experience.[10] He made his Serie A debut on 26 August against Fiorentina and European debut the following month in the UEFA Cup against FC Zürich. Although he did not score any goals, he tallied two vital assists and was a regular starter when available for the Tuscan club. Unfortunately, Empoli were unable to avoid relegation and he was recalled to Turin by the recently-appointed manager Claudio Ranieri.

Return to Juventus and Breakthrough

After his good performances for Empoli, Marchisio returned to Juventus for the 2008–09 campaign and made an impressive Champions League debut, playing the full 90 minutes against Artmedia Petržalka in the Champions League third qualifying round second leg. In November, former Milan and Fiorentina striker Stefano Borgonovo wrote about him on La Gazzetta dello Sport: "Marchisio has everything needed to play at the highest level...has personality, reminds me of the great Marco Tardelli."[1] Under Ranieri, he eventually established himself as first-choice due to injuries and lackluster performances from other midfielders. He further established himself in the starting eleven after a man-of-the-match game against Milan in pouring rain,[11] that earned him rave reviews from the media. He quickly became a firm favourite amongst the Bianconeri fans and they voted him as their December player of the month on the club website.[12] Five days after his 23rd birthday, he scored his first Serie A goal, the match-winner against Fiorentina.[5][13] Less than a week later, he was rewarded with an improved five-year contract extension.[6][14] His season was interrupted by a series of minor injuries in April which resulted in him being sidelined for almost a month, and he returned to the starting eleven for the penultimate matchday away at Siena, marking it with a goal and an assist for captain Alessandro Del Piero's second goal of the match in a 3–0 win[15] and then setting up Vincenzo Iaquinta's opener in a 2–0 home win against Lazio, a result that ensured a second-place finish for the Bianconieri. When the season ended, he was continuously linked with various clubs but director of sport Alessio Secco ended all speculation by listing him as one of the "untouchable" players.[16] His good performances did not go unnoticed by national team coach Marcello Lippi, who named him in the starting line-up in a summer friendly against Switzerland.

Marchisio continued to be first choice under Ciro Ferrara and later Alberto Zaccheroni mainly due to his versatility and consistency in midfield. During the beginning of the 2009–10 season, he had a good run of form, winning Man of the Match awards in four consecutive matches and being voted player of the month for September by registered members on the club website[17][18] but picked up a knee injury in the loss to Palermo at the beginning of October.[19] After surgery, he was sidelined for one and half months and made his comeback as a last minute substitute in the Champions League group stage tie away at Girondins Bordeaux on 25 November. On 5 December 2009, he scored the winner in a 2–1 home win over Inter in the Derby d'Italia where he showed incredible composure to drag the ball with both feet before dinking it over the stranded Júlio César.[20] Three days later, he set up David Trézéguet to score the opening goal of the game in the decisive Champions League 4–1 home loss against Bayern Munich. At the end of the year, he was voted Juventus player of the year for 2009 by fans on the club website.[21] In the Europa League round of 16 tie against Fulham on 11 March 2010, he captained the team for the first time when Trézéguet handed him the captain's armband after being substituted at the 62nd minute as vice-captains Gianluigi Buffon and Giorgio Chiellini missed the match through injury and Del Piero remained an unused substitute.[22] He scored an equalizer against Catania on the second-last away matchday to keep Juventus in an Europa League spot and, despite Juventus' dismal season, was one of the few players to escape the mass criticism from the press.[23]

Despite a disappointing World Cup campaign, Marchisio began the season as first-choice under new manager Luigi Delneri. After a slow start to the season, he began to thrive in his role as a wide midfielder. In September he marked his 100th appearance in a Juventus shirt with a goal against Udinese Calcio in a 4-0 win.[24] He started his first match as captain against Roma in April. On 17 May 2011, Juventus announced that Marchisio had signed a new improved 5-year contract.[25] His goal against Udinese in January was voted Goal of the Season by fans on fansite vecchiasignora.com.[26]

Marchisio started the 2011-12 season by scoring Juve's final goal in the opening match 4-1 win over Parma. He scored a late double to break the deadlock in the 2-0 win at home against Milan, the first time he has ever scored more than one goal in a match.[27][28]

Marchisio was initially called up in early May to the U-21 squad for the 2007 European Championships but eventually withdrew due to injury.[29] He made his Italy U-21 debut in June 2007, the group opening game of the 2009 European Championship qualifying but his debut ended rather unfortunately as he was injured in a collision barely ten minutes into the match while attempting an effort on goal, although the shot would lead to Robert Acquafresca's opener seconds later. Eventually he became first-choice during the latter stages of the campaign. He scored a 30-yard volley at the 2008 Toulon Tournament against Turkey in a 2–1 win and was called-up to the Olympics that summer but he was forced to return home due to an injury. In May 2009, Pierluigi Casiraghi named him in the final squad for the 2009 U-21 European Championship. At the tournament, he started every game and, despite missing the semifinal loss to Germany through suspension, was one of several Azzurrini stars tipped to make the senior squad.[30][31]

On 12 August 2009 Marchisio made his senior debut, starting in the friendly against Switzerland that ended goalless[32][33] and was praised by Marcello Lippi during the post-match interview.[34] Lippi later revealed that he had intended to call Marchisio up earlier but agreed to leave the youngster to Casiraghi's U-21 squad until to the end of the European Championships. Marchisio played his first competitive match for the Azzurri in the World Cup qualifer against Bulgaria in his home stadium and became a first-choice pick for Lippi's squad.[35] However he was forced to withdraw from the remaining qualifying matches against Ireland and Cyprus after being diagnosed with a knee meniscus injury that required surgery.[36] He was named in the 23-man squad for the 2010 World Cup.[37]

Marchisio scored his first ever international goal in the Euro 2012 qualifier against Serbia on 7 October 2011 barely a minute after kick-off. It was the 250th goal scored by a Juventus player for the Italy national team.[38]

Marchisio married his sweetheart Roberta in June 2008[20][39] and they have a son, who was born in August 2009 while he was away on international duty for World Cup qualifying.[40] His wife supported Juve's crosstown rivals Torino, ironically, as her father used to play for the Torino youth teams as well as various clubs in the Serie C2 and Serie D.[41]

He is affectionately known to supporters as Il Principino ("Little Prince"), a nickname he acquired from the well-known Italian football commentator Claudio Zuliani. Some fans and observers have also dubbed him the "De Rossi of Turin", in reference to his national teammate Daniele De Rossi of Roma, due to their similar style of play and the fact that both are local born and bred youth products and are tipped to be future captains of their respective clubs.