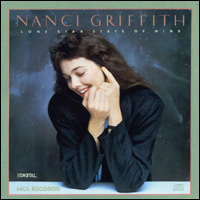 "Lone Star State of Mind" is 's fifth album, and her first with a major recording label. Griffith's music had seen a turn from her original base into more commercially viable in her previous two albums. On the current album she enlists the hit-making talents of veteran country producer Tony Brown. While this album would garner her first appearance on the Billboard Country charts, Griffith would never become a major country star. The album rose to #23 on the Country Albums chart, but that would be as high as any of her albums would ever climb. The title track, "Lone Star State of Mind," would become the first of only two singles ever to enter the Top 40 of the Billboard chart; it topped out at #36, while two other singles from the album could only gain much lower positions: "Cold Hearts/Closed Minds" at #64, and "Trouble in the Fields" at #57. Griffith's very literary style was perhaps a little too thought-provoking to be a success in the world of Top 40 country radio.

All tracks composed by Nanci Griffith; except where indicated