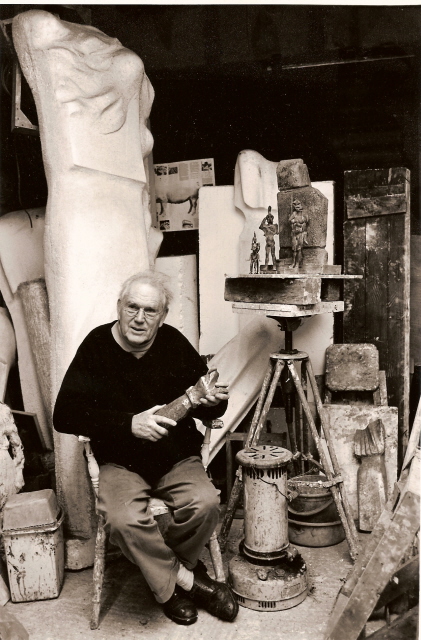 Born in , and named Arthur John, he was usually called 'Bridge' by his friends and signed himself John Bridgeman. He joined Colchester School of Art at the age of 14 and went on from there to the where he studied with Frank Dobson [ [http://www.leicestergalleries.com/art-and-antiques/detail/11217 Study of a Female Nude by FRANK DOBSON ] ] and won the Medal for Sculpture. His first love was painting, and it was during this period that he produced may gouache paintings and pastels in a Romantic style celebrating the English countryside. [ [http://www.findarticles.com/p/articles/mi_qn4158/is_19970921/ai_n14130734 THE SUBTLE APPROACH | Independent, The (London) | Find Articles at BNET.com ] ] After the war he was awarded the Scholarship, but did not take this up going on to work with and then on the Dome of Discovery for the . After a spell as head of sculpture at Carlisle School of Art he succeeded as head of Sculpture at where he worked until retirement in 1981.

His work was popular with both private and municipal patrons and he contributed particularly to the regeneration of Birmingham after the war through the creation of a number of iconic pieces of public art. He also created play sculptures for children in the new council estates which were being built - an innovative idea that was ahead of its time in the 1950s. [http://books.google.com/books?vid=ISBN0419259007&id=vYoMKHuwcyEC&pg=RA2-PA162&lpg=RA2-PA162&dq=john+bridgeman+sculptor&sig=7b_3selv-sp9xjQfxfoqqY_iDak#PPA162,M1 ] Always experimenting with new materials, his cement fondue Mother and Baby for Birmingham Maternity Hospital [http://pmsa.cch.kcl.ac.uk/images/nrpBM/BMAP4.jpg] and the recently restored over-life-size bronze group 'Compassion' for the Dudley Road Hospital, Birmingham [http://pmsa.cch.kcl.ac.uk/images/nrpBM/BMAK12.jpg] are typical of his large scale commissions [http://www.acbwm.org.uk/ACBNews/2006/may2006.pdf] . The Mater Dolorosa in the Lady chapel of the then recently rebuilt is perhaps the most powerful of his religious works, which he created throughout his life. [http://coventrycathedraltour.org.uk/images/features/virgin_mary.jpg] His philosophy of art and his interest in methods and materials are embodied in the book he co-wrote with his wife, the author and journalist Irene Dancyger, "Clay Models and Stone Carving", 1974. [ [http://worldcat.org/search?q=irene+dancyger&qt=notfound_page&search=Search_author Results for 'Irene Dancyger' [WorldCat.org ] ] Towards the end of his life he concentrated on smaller female figures proving himself to be one of the last great practitioners of the art of lost-wax modelling.