Robert-François Damiens
The title of this article contains the character ç. Where it is unavailable or not desired, the name may be represented as Robert-Francois Damiens. 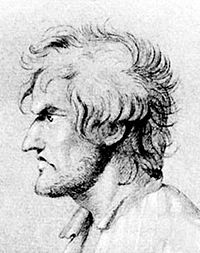 Robert-François Damiens (9 January 1715 – 28 March 1757) was a French domestic servant whose attempted assassination of King Louis XV of France in 1757 culminated in his notorious and controversial public execution.[1] He was the last person to be executed in France by drawing and quartering, the traditional and gruesome form of death penalty used for regicides.

Damiens was born on 9 January 1715 in La Thieuloye, a village near Arras in northern France.[2] He enlisted in the army at an early age. After his discharge, he became a domestic servant at the college of the Jesuits in Paris, and was dismissed from this as well as from other employments for misconduct, earning him the epithet of Robert le Diable (Robert the Devil).

Damiens' motivation has always been questionable: historians often describe him as mentally unstable. From his answers under interrogation, Damiens seems to have been excited by the schismatic uproar which followed the refusal of the French Catholic clergy to grant holy sacraments to the Jansenists, a sect which was considered heretical. He appears to have planned a punishment for the king, upon whom he placed ultimate blame.[3] 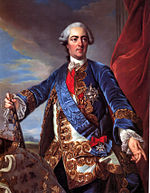 On January 5, 1757, as the king was entering his carriage, Damiens rushed forward and stabbed him with a knife, inflicting only a slight wound. He made no attempt to escape, and was apprehended at once. He was then tortured to force him to divulge the identity of his accomplices or those who had sent him. This was unsuccessful. He was condemned as a regicide by the Parlement of Paris, and sentenced to be drawn and quartered by horses at the Place de Grève. 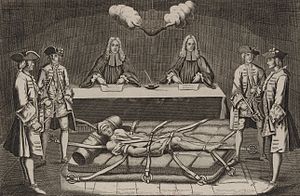 Damiens before his judges

Fetched from his prison cell on the morning of 28 March 1757, Damiens allegedly said "La journée sera rude" ("The day will be hard").[4] He was tortured first with red-hot pincers; his hand, holding the knife used in the attempted assassination, was burned using sulphur; molten wax, lead, and boiling oil were poured into his wounds. After several hours of agony, he was remanded to the royal executioner, Charles Henri Sanson. Horses were harnessed to his arms and legs, but Damiens' limbs did not separate easily: after several more hours, the officients were forced to have Sanson cut Damiens' joints with an axe. Damiens was dismembered to the applause of the crowd, and his torso - reportedly still living - was burnt at the stake.

After his death, the remains of Damiens' corpse were reduced to ashes and scattered in the wind.[5] His house was razed to the ground, his brothers and sisters were ordered to change their names, and his father, wife, and daughter were banished from France.

Because France had not experienced a regicide for a century and a half,[6] Damiens' infamy endured. Forty years after his death, Arras' most notorious citizen was used against another Arras native, Maximilien Robespierre. The polarizing dictator of the French Revolution was described frequently by his enemies as the nephew of Damiens. Though completely untrue, the libel held considerable credibility among royalists and foreign sympathizers.[7]

The execution was witnessed by famous 18th-century adventurer Giacomo Casanova, who included a scandalized account in his memoirs.[8]:

We had the courage to watch the dreadful sight for four hours(...) Damien was a fanatic, who, with the idea of doing a good work and obtaining a heavenly reward, had tried to assassinate Louis XV; and though the attempt was a failure, and he only gave the king a slight wound, he was torn to pieces as if his crime had been consummated.(...)I was several times obliged to turn away my face and to stop my ears as I heard his piercing shrieks, half of his body having been torn from him, but the Lambertini and Mme XXX did not budge an inch. Was it because their hearts were hardened? They told me, and I pretended to believe them, that their horror at the wretch's wickedness prevented them feeling that compassion which his unheard-of torments should have excited.
—Book 2, Volume 5, Chapter 3

The philosopher Cesare Beccaria explicitly cited Damiens' fate when he condemned torture and the death penalty in his classic treatise On Crimes and Punishments (1764).[1] Damiens's execution is also described and discussed at length in the introduction to Michel Foucault's study of systems of punishment, Discipline and Punish.[9]

Thomas Paine in Rights of Man mentions Damiens' execution as an example of the cruelty of despotic governments; Paine argues that these methods were the reason why the masses dealt with their prisoners in such a cruel manner when the French Revolution occurred. An allusion to Damiens' attack and execution, and Casanova's account of it, are used by Mark Twain to suggest the cruelty and injustice of aristocratic power in chapter XVIII of A Connecticut Yankee in King Arthur's Court.

Science fiction writer James Morrow draws on the incident for the trial of God in his novel Blameless in Abaddon. There is also a description of the death of Damiens in Peter Weiss' play Marat/Sade. The incident figures prominently in Hanns Heinz Ewers' frame-tale "The Execution of Damiens".