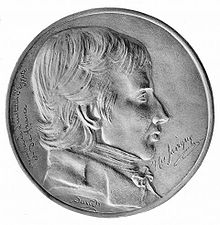 Savigny was born at Provins. In 1798 he travelled to Egypt with the Emperor Napoleon as part of the French scientific expedition to that country, and contributed to the publication of the findings of the expedition in 1809 (Description de l'Égypte published more fully in 1822). He wrote about the fauna in the Mediterranean Sea and the Red Sea and discovered that mouth parts of arthropods were transformed extremities[citation needed].

Education and travel to Egypt

At age 16, Savigny traveled from his home of Provins, in the department of Seine et Marne, to Paris to finish his studies. Being very interested in botany, he worked at the Muséum national d'histoire naturelle with Jean-Baptiste Lamarck and Georges Cuvier. Cuvier suggested to Napoleon that the 21-year-old Savigny should follow him as zoologist to Egypt. Savingy became responsible for studying invertebrates, while Geoffroy Saint-Hilaire took care of the vertebrates. After returning to Paris, in 1802, Savigny started to work on the large collections from Egypt, producing a number of manuscripts and plates.

By 1817, Savingy's eyesight had deteriorated, and he had to stop working for a number of years. After returning to work in 1822, his eyesight continued to worsen, and by 1824 he became more-or-less blind, with terrible "optical hallucinations."

Some species named for or by Savigny