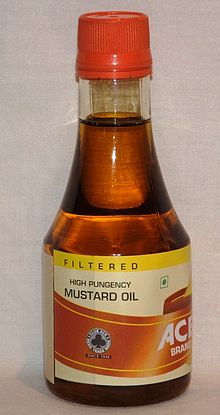 The term mustard oil is used for three different oils that are made from mustard seeds:

The pungency of mustard oil is due to the presence of allyl isothiocyanate, an activator of the TRPA1 channel. 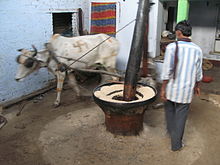 This oil has a strong sinus-irritating aroma, like that of horseradish or wasabi, a hot nutty taste, and is often used for cooking in Northern India, eastern India, Nepal and Bangladesh. In north India, it is mainly used in frying fritters. In Nepal and Bengal, it is the traditionally preferred oil for cooking, although nowadays neutral-flavored oils like sunflower oil are also extensively used. The oil makes up about 30% of the mustard seeds. It can be produced from black mustard (Brassica nigra), brown Indian mustard (Brassica juncea), and white mustard (Brassica hirta).

Mustard oil contains the pungent Allyl isothiocyanate and has about 60% monounsaturated fatty acids of which 42% erucic acid and 12% oleic acid, it has 21% polyunsaturates of which 6% is the omega-3 alpha-linolenic acid and 15% omega-6 linoleic acid and it has 12% saturated fats.[1]

Mustard seeds, like all seeds of the Brassica family, including canola (rapeseed) and turnip, have high levels of omega-3 (6–11%) and are a common, cheap, mass-produced source of plant-based (therefore, vegetarian) omega-3 fatty acids (see Indo-Mediterranean diet in the links below). Flax (linseed) oil has 55% plant-based omega-3 but is uncommon as a table or cooking oil. Soybean oil has 6% omega-3 but contains over 50% omega-6, the fatty acid that competes with the omega-3 function. Other than rapeseed and mustard oils, there are few other common sources of plant based omega-3 in Western and Indian diets. Especially when omega-6 intake is kept low, humans can convert the plant omega-3 into one of the fish omega-3s, eicosapentaenoic acid, in limited amounts, a useful source for vegetarians.

In India, mustard oil is often heated almost to smoking before it is used for cooking; this may be an attempt to reduce the strong smell and taste. However, high heat can damage the omega-3 in the oil, reducing its unique role in health. In Western countries, the oil is often sold "for external use only" in stores catering to Indian immigrants, since in North India, mustard oil is also used for rub-downs and massages (see ayurveda), thought to improve blood circulation, muscular development and skin texture; the oil is also antibacterial. The oil is also sometimes used prior to sexual intercourse on the male genitalia to enhance erections or strengthen virility.[2]

The effects of erucic acid from edible oils on human health are controversial. However no negative health effects have ever been documented in humans.[3] A four-to-one mixture of erucic acid and oleic acid constitutes Lorenzo's oil; an experimental treatment for a rare neurobiology disorder adrenoleukodystrophy.

Mustard oil was once considered unsuitable for human consumption in the United States, Canada, and the European Union due to the high content of erucic acid. This is because of early studies in rats. Subsequent studies on rats have shown that they are less able to digest vegetable fats (whether they contain erucic acid or not) than humans and pigs.[4][5][6] Chariton et al. suggests that in rats: “Inefficient activation of erucic acid to erucyl-CoA and a low level of activity of triglyceride lipase and enzymes of betaoxidation for erucic acid probably contribute to the accumulation and retention of cardiac lipid.”[7] Before this process was fully understood it led to the belief that erucic acid and mustard oil were both highly toxic to humans.

Epidemiological studies[citation needed] suggest that, in regions where mustard oil is still used in a traditional manner, mustard oil may afford some protection against cardiovascular diseases. In this sense "traditional" means that the oil is used fresh and vegetable fats count only as a small percentage of the total caloric intake. Whether this effect is due to the nature of erucic acid per se to make the blood platelets less sticky, or to the presence of a reasonably high percentage of α-linolenic acid, or to a combination of properties of fresh unrefined oil, is as yet uncertain. Care needs to be taken with such epidemiological studies in order to exclude the possibility of early deaths from other causes skewing the results. The fact that early asymptomatic coronary disease is readily detectable post mortem and is absent in the mustard oil cohorts tends to add weight to the hypothesis that mustard oil is protective.[8]

The use of mustard oils in traditional societies for infant massage has been identified by one study as risking damaging skin integrity and permeability.[9] Other studies over larger samples have shown that massaging with mustard oil improved the weight, length, and midarm and midleg circumferences as compared to infants without massage, although sesame oil is a better candidate for this than mustard oil.[10]

1tbsp of mustard oil contains the following nutritional information according to the USDA:[11]

Because of the contained allyl isothiocyanate, this type of mustard oil is toxic and irritates the skin and mucous membranes. In very small amounts, it is often used by the food industry for flavoring. In northern Italy, for instance, it is used in the fruit condiment called mostarda. It is also used to repel cats and dogs. It will also denature alcohol, making it unfit for human consumption, thus avoiding the taxes collected on alcoholic beverages.[citation needed]

Use in North Indian cultural and artistic activities

Mustard oil was once popular as a cooking oil in northern India. In the second half of the 20th century the popularity of mustard oil receded due to the availability of mass-produced vegetable oils. It is still intricately embedded in the culture: