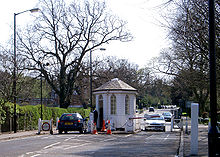 Tollgate on The Dulwich Estate

The Dulwich Estate is a registered charity in England, one of the successors to the historic charity Alleyn's College of God's Gift, founded in 1619. It owns the freehold of around 1,500 acres (6.1 km2) in Dulwich, South London, including a number of private roads and a tollgate.

In 1995 a major reorganisation of the historic Alleyn's College charity resulted in the reconstitution of The Dulwich Estate as an independent registered charity.

The Estate distributes its surplus to a number of beneficiaries defined by its governing document. In 2006–7 the Estate had a gross income of £8million, and net assets valued at £187.9million.[1]

The Dulwich Estate is empowered to distribute its surplus for charitable purposes to the following beneficiaries only:

Dulwich Picture Gallery ceased to be a beneficiary of the charity in 1995.

The foundation known as Alleyn's College of God's Gift was founded by Edward Alleyn, Shakespearian actor, in 1619 for the purposes of educating poor scholars and providing accommodation for poor persons. These basic principles still exist today but on a much wider scale, embracing among the beneficiaries Dulwich College, James Allen's Girls School, Alleyn's School, The Central Foundation Schools, and St. Saviour's & St. Olave's Schools (Boys and Girls) and also the Dulwich Picture Gallery and Christ's Chapel.

In 1995 a major reorganisation of the historic Alleyn's College charity resulted in the reconstitution of The Dulwich Estate as an independent registered charity, and the other former constituents also became independent.

As a registered Charity, the Estate is bound to distribute its disposable income to its beneficiaries so that apart from the sums necessarily spent on estate management it is not in itself wealthy. In the 2005-2006 financial year the Estate distributed £5.49m from its income and £20m in capital to these beneficiaries.[6]

The Old College and Almshouses

The Old College and Almshouses (Edward Alleyn House) situated at the junction of Gallery Road and College Road, Dulwich Village SE21, were completed by 1618. The central section houses Christ's Chapel which was consecrated in 1616. The west wing originally housed the Almshouses, then became the home of the College. The buildings have been known as the Old College since the New College was opened in 1870. The west wing now houses the offices of the Estate Governors.

The Almshouses (Edward Alleyn House) are situated in the east wing of the Old College. They comprise sixteen recently modernised flats which are let at a modest charge to suitable applicants who have proper qualification, namely a link with any one of the following parishes - St. Botolph's without Bishopsgate, St. Luke's Finsbury, St. Giles Camberwell, and St. Savior's Southwark. These are all parishes with which Edward Alleyn had personal or business connections.

The Estate Governors administer the Estate in accordance with a scheme made by the Board of Education on the 4 June 1913, under the Charitable Trusts Acts, 1855 to 1894, as amended by various altering schemes made between 1920 and 1978.

The "Estate" comprising some 1,500 acres (6.1 km2) is bounded by Crystal Palace to the South, Denmark Hill to the North, part of Lordship Lane to the East, and Tulse Hill to the West. It is situated in the inner London borough of Southwark but has large areas of open space. The Estate has been managed by the Estate Governors and their predecessors since 1619 to obtain the maximum benefit for the Beneficiaries.

Since the advent of the Leasehold Reform Act 1967, many leaseholders have acquired their freeholds.