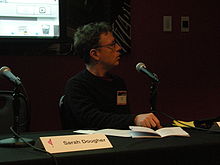 Charles R. Cross is a journalist and author of seven books based in Seattle. He was the Editor of The Rocket Magazine in Seattle for fifteen years during the height of the Seattle music mania. He is also the founder of Backstreets Magazine, a periodical for fans of Bruce Springsteen, and editor of Springsteen: the Man and His Music, a compilation of Backstreets articles. His 2001 biography of Kurt Cobain, titled Heavier Than Heaven was winner of the 2002 ASCAP Award for Outstanding Biography. Cross is also the author of another book focused more on Cobain's creative and artistic life called Cobain Unseen published in 2009. His most recent release, as of 2009, is entitled Led Zeppelin: Shadows Taller Than Our Souls published by It Books, a division of Harper Collins.

In 2004, while conducting research for his 2005 biography of Jimi Hendrix, entitled Room Full Of Mirrors - A Biography Of Jimi Hendrix, Cross rediscovered the gravesite of Jimi Hendrix's mother, Lucille Jeter Hendrix, in an abandoned section of Greenwood Memorial Park, where Jimi Hendrix himself is buried in an elaborate granite memorial. The gravesite of Lucille Hendrix was lost because the standard welfare marker of her day, an inscribed brick, became buried in decades of mud from the area's notorious heavy rains. Cross delivered a moving eulogy for Lucille when a proper headstone was dedicated at the site.

Universal Pictures has acquired the rights to Heavier Than Heaven, which is now being made into a film. This is the first film to be made from Cross' work. His Hendrix book has also been optioned.