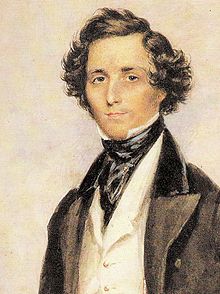 Felix Mendelssohn's Violin Concerto in E minor, Op. 64 is his last large orchestral work. It forms an important part of the violin repertoire and is one of the most popular and most frequently performed violin concertos of all time.[1][2][3] A typical performance lasts just under half an hour.

Mendelssohn originally proposed the idea of the violin concerto to Ferdinand David, a close friend and then concertmaster of the Leipzig Gewandhaus Orchestra. Although conceived in 1838, the work took another six years to complete and was not premiered until 1845. During this time, Mendelssohn maintained a regular correspondence with David, seeking his advice with the concerto. The work itself was one of the first violin concertos of the Romantic era and was influential to the compositions of many other composers. Although the concerto consists of three movements in a standard fast–slow–fast structure and each movement follows a traditional form, the concerto was innovative and included many novel features for its time. Distinctive aspects of the concerto include the immediate entrance of the violin at the beginning of the work and the linking of the three movements with each movement immediately following the previous one.

The concerto was initially well received and soon became regarded as one of the greatest violin concertos of all time. The concerto remains popular and has developed a reputation as an essential concerto for all aspiring concert violinists to master, and usually one of the first Romantic era concertos they learn. Many professional violinists have recorded the concerto and the work is regularly performed in concerts and classical music competitions. 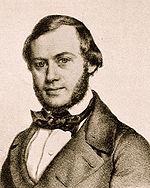 Ferdinand David, the soloist violin who premiered the piece whose collaboration was essential for the concerto's birth.

Following his appointment in 1835 to principal conductor of the Leipzig Gewandhaus Orchestra,[4] Mendelssohn named his childhood friend Ferdinand David as the orchestra's concertmaster.[5] The work's origins derive from this professional collaboration. In a letter dated 30 July 1838, Mendelssohn wrote to David: "I should like to write a violin concerto for you next winter. One in E minor runs through my head, the beginning of which gives me no peace."[6]

The concerto took another six years to complete. There are many possible reasons for the delay, including self-doubt,[7] his third symphony[8] and an unhappy period in Berlin after a request from King Frederick William IV of Prussia.[9] Nevertheless, Mendelssohn and David kept up a regular correspondence during this time,[6] with Mendelssohn seeking technical and compositional advice. Indeed, this violin concerto was the first of many to have been composed with the input of a professional violinist, and would influence many future collaborations.[8] The autographed score is dated 16 September 1844, but Mendelssohn was still seeking advice from David until its premiere.[5] The concerto was first performed in Leipzig on 13 March 1845 with Ferdinand David as soloist. Mendelssohn was unable to conduct due to illness and the premiere was conducted by the Danish composer Niels Gade.[8] Mendelssohn first conducted the concerto on 23 October 1845 again with Ferdinand David as soloist.[8]

The concerto consists of three movements with the following tempo markings:

The opening of the Violin Concerto.

The concerto opens with an almost immediate entry of the solo violin, instead of an orchestral tutti, with the very tune in E minor that gave Mendelssohn no peace.[10] Following a bravura of rapidly descending notes, the opening theme is then restated by the orchestra.[8] There is then a frenetic chromatic transition passage[8] as the music subsides and modulates into a tranquil second subject theme in G major.[11] The melody is initially played by the woodwinds with the soloist providing a pedal note on an open G string.[10] The tune is played by the solo violin itself before a short codetta ends the exposition section of the opening movement. The opening two themes are then combined in the development section, where the music builds up to the innovative cadenza, which Mendelssohn wrote out in full rather than allowing the soloist to improvise.[5] The cadenza builds up speed through rhythmic shifts from quavers to quaver-triplets and finally to semiquavers,[7] which require ricochet bowing from the soloist.[12] This serves as a link to the recapitulation, where the opening melody is played by the orchestra, accompanied by the continuing ricochet arpeggios by the soloist. During the recapitulation, the opening themes are repeated with the second theme being played in the E major before returning to E minor for the closing of the movement. The music gathers speed into the coda, which is marked 'Presto',[12] before a variant of the original chromatic transition passage ends the first movement.

The main theme of the Andante.

The bassoon sustains its B from the final chord of the first movement before moving up a semitone to middle C.[8] This serves as a key change from the E minor opening movement into the lyrical C major slow movement. The movement is in ternary form and is reminiscent of Mendelssohn's own Songs without Words.[7] The theme to the darker, middle, section in A minor[11] is first introduced by the orchestra before the violin then takes up both the melody and the accompaniment simultaneously. The tremulous accompaniment[8] requires nimble dexterity from the soloist before the music returns to the main lyrical C major theme, this time leading towards a serene conclusion.

The opening theme of the Allegro molto vivace.

Following the second movement, there is a brief fourteen-bar transitional passage in E minor for solo violin and strings only.[12] This leads into the lively and effervescent finale, the whole of which is in E major and whose opening is marked by a trumpet fanfare.[8] The third movement is in sonata rondo form[11] with an opening theme requiring fast passage work from the soloist. The opening exposition leads into a brief second B major[7] theme which is played by the soloist and builds to a series of rapidly ascending and descending arpeggios, reminiscent of the cadenza from the first movement. The orchestra then plays a variation of the opening melody, before the music moves into a short development section in G major.[7] The recapitulation is essentially similar to the exposition, apart from the addition of a counter-melody in the strings. There is almost a small cadenza near the end of the movement when the woodwinds play the main tune against prolonged trills from the solo violin.[7] The concerto then concludes with a frenetic coda.

The concerto is innovative in many respects. In the first movement alone, Mendelssohn departs from the typical form of a Classical concerto in many ways, the most immediate being the entry of the soloist almost from the outset, which also occurs in his First Piano Concerto.[10] Although the first movement is mostly in sonata form, Mendelssohn has the first theme played by the solo violin and then by the orchestra. Classical concertos typically opened with an orchestral introduction followed by a version of essentially the same material that incorporates the soloist.[8]

The violin concerto stands out from previous concertos with its connected movements.[7] There is no break between the first and second movements, with a bassoon note held between the two.[8] The bridging passage between the last two movements begins almost immediately after the slow movement. The melody is similar to that of the opening, which hints at the cyclic form of the piece.[13] The linking was designed to eliminate applause between movements. This would have come as a surprise to Mendelssohn's audience, who unlike today were used to applauding between movements.[8]

The concerto also calls on the soloist to be nothing more than just an accompanist to the orchestra for extended periods, an example being the ricochet arpeggios at the start of the recapitulation. This too was novel for a violin concerto of its time.[7]

Mendelssohn's Violin Concerto influenced the concertos of many other composers, who would use aspects of the concerto in their own.[10] This would lead to the concerto being regarded as one of the most plagiarised of all time.[1]

For example, the unusual placement of the cadenza before the recapitulation would inspire violin concertos by Tchaikovsky (where the cadenza is similarly placed) and Sibelius (where the cadenza serves to extend the development section).[7] Moreover, following this concerto it would be very rare for a composer to leave a cadenza unwritten, for the soloist to improvise, as in the days of Mozart and Beethoven.[10] The linking of the three movements would also influence other concertos, an example being Liszt's Second Piano Concerto.[7]

The concerto itself was an instant success, warmly received at its premiere and well received by contemporary critics.[14] By the end of the nineteenth century, the piece was already considered one of the greatest violin concertos in the repertoire.[7] It would become one of Mendelssohn's most popular pieces, and was still regularly performed, even when interest in his music declined in the early twentieth century.[4] In 1906, the year before his death, celebrated violinist Joseph Joachim told the guests at his 75th birthday party:[8]

The work has developed a reputation as an essential work for all aspiring violin virtuosi to conquer.[15] This has led to the concerto becoming virtually ubiquitous in the discography of concert violinists, even including those who were only active at the very dawn of recorded sound and of whom very little recorded music exists, such as Eugène Ysaÿe.[16] Even so, the concerto is still technically challenging and is generally considered to be as difficult as many other famous counterparts.[17]