Caparezza ("Curly Head" in Molfetta's dialect), pseudonym of Michele Salvemini, born 9 October 1973) is an Italian rapper. Born in Molfetta, Apulia, Caparezza debuted in 1997 at the Sanremo Festival under the name "MikiMix".

Caparezza was born in Molfetta on October 9, 1973.

His music genre is mainly Hip Hop, but highly influenced by Avant-garde music, Progressive and Experimental music, similar in style to Frank Zappa, who Caparezza considers his "teacher". This has earned him the title of "Beppe Grillo of music" among his fans; like Grillo, Caparezza criticizes society and politics with sharp irony in contexts which are often fantastic and unreal. At first Caparezza appears nonsensical due to his use of unusual metaphors, and above all because he has disowned the mainstream of hip-hop; thus he appears to be a nonconformist rejected by the Italian mainstream.

He released five albums which are filled with ideas, music genres, notions, poetry, criticism and concepts, but, notably, all of his songs are packed with quotes, both hidden and evident, to movies, comics, commercials, tv broadcasting, classic writers, other musicians and many more, many of which are very difficult to spot, or to link to the fact they refer to.

Caparezza’s mother was a teacher and his father was a worker who used to play in a band, so Michele started playing music as a child. He studied accountancy, although he dreamed of writing comics. After completing High School, Michele began to work in advertising, and won a scholarship for the Academy of Media and Journalism in Milan. However, he soon decided to leave the advertising world to fully devote himself to music. Michele started his career under the name Mikimix, but composed melodic songs with poor artistic value and thus did not obtain widespread success. He also anchored the broadcast Segnali di Fumo together with Paola Maugeri on Video Music italian channel. After some performing in Milan’s pubs, Mikimix made his debut in Castrocaro Festival and subsequently participated to two Sanremo Festivals in the New Generation section, in 1995 and in 1997, and succeeded in publishing his first album, La mia buona stella, which however was a success only in France. 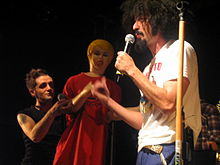 Michele went back to Molfetta thinking of quitting music, but shortly after he decided to make a new fresh start, and started composing music in his garage while he stopped cutting his hair and beard. Salvemini changed his pseudonym from Mikimix to Caparezza ("Curly Head" in Apulian dialect) and in 2000 published his first album, ?!, in which he disowns and nearly rejects his 'Mikimix' past, because he considered himself at the time inconsistent and poor compared to his present self. His second album, Verità Supposte, Supposed truths (note that in italian supposte is used both for supposed and suppository), led him to success in 2003-2004. His third album, Habemus Capa (is a pun on the habemus papam statement which is used after pope elections to announce to the people that a new pope has been chosen), is a criticism against society's contradictions; Salvemini imagines his death and his descent to the Hell, which is eventually our world, describing a dreadful aspect of modern society in every song. It was published in 2006.

In 2008 he released his fourth album, Le dimensioni del mio caos (My chaos dimensions, which in italian sounds pretty close to my guts sizes). This takes the form of a science-fiction story starring Caparezza as the main character. During a tribute concert to Jimi Hendrix, Caparezza destroys a guitar on an amplifer, and creates a time-space warp from which a girl from the 1960s named Ilaria shows up, and Caparezza falls in love with her. Caparezza realizes that the present time has changed because the past had been altered. The only way, is to bring back Ilaria to the time where she belongs. But Ilaria is already heavily influenced by modern society and doesn't want to go back to 1968. In this alternative 2008, the Church rules and Caparezza is arrested because he has pockets which are forbidden (There's jail for those who wear pockets, because in pockets there's no control. Since then, only those who were artists, or junkies, or both, like Basquiat, wore pockets). After he is released from prison, he discovers that Ilaria has married Carneade, who is the leader of the "Somebody people Front", a political movement reserved for VIPs. Caparezza cannot manage to take Ilaria back to 1968 and meanwhile the "Somebody people Front" is planning to build a spaceport in Apulia to gain support and popularity for the imminent elections. Caparezza visits the construction site and meets Luigi delle Bicocche, a mason who is also the protagonist of the song "Eroe-storia di Luigi delle Bicocche", a song about the conditions of the working class and the society in Italy. Caparezza, demoralized, gives his Stratocaster and his amplifier to Luigi. Suddenly we find out that Luigi's (gigi, for short, in italian) real nature is being a guitar player (Gigi Hendrix); while playing in a gig, he destroys the Stratocaster on the amplifer and creates a time-space warp which brings humanity back to his origins. Humans has been turned into bonobos, a specie of great apes, whose society is based upon sharing resources and every dispute between individuals is sorted through sex.

On 28 January 2011, he published the first single from the fifth album Il sogno eretico, entitled "Goodbye Malinconia", featuring Tony Hadley of Spandau Ballet. Il sogno eretico (The heretic dream) is a concept album, and the core message is a urge to the people to reject tenets and dogmas, and to use critical thinking while looking at the world around us. The songs includes historical heretic characters like Galileo Galilei, Joan of Arc, Giordano Bruno and Girolamo Savonarola whose stories are linked to topical interests, for the purpose of explaining widely known facts from a different angle. In the song La fine di Gaia Caparezza talks about end of the world prophecies (saying it won't happen) and various conspiracy theories, while in other songs he talks about religion, politics, people's misbehaviour and attitude towards power and money.

Michele sings together with Diego Perrone, who replaced Stefano Ciannamea which is the creator, and now administrator of Caparezza’s official web site. Diego Perrone is also the lead singer in the band Medusa. Caparezza is also a member of Sunny Cola Connection, a group who sings in the Apulian dialect. He also worked with many other musicians, like the Italian rappers Puni, Piotta and Mondo Marcio and with pop musician Roy Paci & Aretuska, and with Medusa.

Caparezza had a summer hit with "Fuori dal tunnel"; however, the singer has always protested against the use of the song in discos and on television, because it is meant to be a denunciation of the de–individualization of entertainment, but the agreement with his music company didn't allow him to avoid the song being put in commercials or being used in the very same tv broadcastings which the song actually criticized. Another song on Verità Supposte is "Vengo dalla Luna", which tells about an alien (Caparezza) knocked down to Earth who is astonished by the intolerance of humanity for a different race and culture. It is a song opposing prejudices toward immigrants. In Habemus Capa songs include "La mia parte intollerante" which again expresses the marginalization of Caparezza. In the fourth album, "Eroe" is a story of a mason who is regarded as a hero because he manages to support a family without surrendering to the temptations of loan sharks and draw poker. "Vieni a ballare in Puglia" talks about the situation in Puglia today; the "Caduti del lavoro", the forest fires in Gargano and the air pollution in Taranto. This song, like "Fuori dal tunnel", was misunderstood by the public who considered it a simple praise towards Apulia.