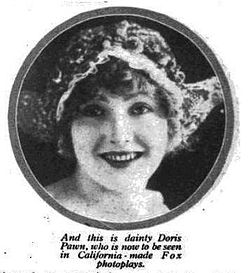 Pawn was born and raised in Norfolk, Nebraska. She was the third Nebraskan woman to make a name for herself as an actress. Previously, Mrs. Sidney Drew and Alice Dovey gained prominence as performers from the state.

Growing up, she spent her vacations on the ranch of an uncle. There, she learned to ride horseback and rode Indian saddle as a teen. She entered a business college to prepare for life as a typist. She came to California with her mother and brother and was left in San Diego, California while her family returned east.

Pawn eventually met director Wilfred Lucas. She was offered work as a fill in in the film Trey of Hearts (1914), while the company was on location in San Diego. The film featured Cleo Madison and George Larkin. So impressed were the filmmakers that she was offered additional work if she came along to Los Angeles, California. Pawn worked for a period of three months as an extra.

She was also very well known for her extremely high singing voices.

Director Sydney Ayres coveted Pawn as a leading lady early in her screen career. In 1916 she appeared in her first Fox Film feature, Blue Blood and Red, directed by Raoul Walsh. Studios were impressed with her personal charm and ability to act naturally. She was especially gifted in the art of pantomime.

In addition to Fox, Pawn made movies with Universal, Goldwyn, and Paramount Pictures. She returned to Fox in 1921 for the making of Shame. She starred alongside John Gilbert and Anna May Wong. Her final films were two dramas, Fools and Riches and The Hero, along with a western, The Buster. Each of these productions was released in 1923.

Pawn was first married to director Rex Ingram, but they divorced in the early 1920s.

In 1917, she was injured on location in Mexico; a group of extras seized control of her car at gunpoint and told her they were taking her back to Mexico with them. As they were nearing the border, her co-star, George Walsh, passed the party in his auto. He sensed the situation, taking out his gun and threatening to kill the men if they did not stop. They fled from Pawn's car and quickly dispersed.