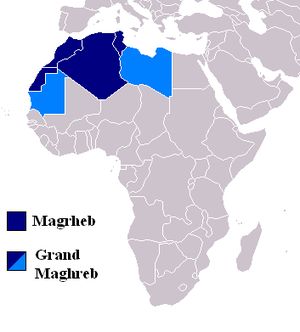 French is an administrative language and commonly used, though not on an official basis, in the Maghreb states of Mauritania, Algeria, Morocco and Tunisia. The language was introduced to the region during French colonial rule in the 19th and 20th centuries. The majority of the population in the Maghreb speaks either a Semitic variety of Arabic as the vernacular language (see; Maghrebi Arabic, Darija, Algerian Arabic, Moroccan Arabic, Tunisian Arabic) or a Berber language natively. Standard Arabic, spoken natively by no one, is the official language of all the Maghreb states.

Algeria was a part of the French colonial empire for 130 years during the French rule in Algeria. Algeria was the home to about one million pieds-noirs, who later were expelled to France. French is still the most studied foreign language and is widely spoken. Since independence, the government has pursued a policy of linguistic Arabisation of education and bureaucracy, with some success, although many university courses continue to be taught in French. French is also commonly used in media and commerce. Most of French speakers are in fact Kabyles, where Arabs are less (even if many of them use a mixture of French and Arabic in daily conversation, which is not the case for Kabyle speakers).

French is the native language of upper classes' Kabyles and also some Arabs. The Algerian Jews and the pieds-noirs were/are also mostly French-speaking. It is a second language for the rest of the population.

French serves as Morocco's primary language of commerce and economics. It is taught universally and is widely used in government and communication.

The situation in Tunisia is similar to that of Morocco. French is used widely in education (for example being the medium of instruction in the sciences in secondary school), the press, and in business, and most educated Tunisians are able to speak it. Many Tunisians mix Tunisian Arabic with French. 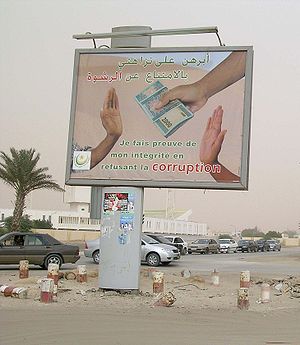 Anti corruption campaign in Nouakchott, in Arabic and French

French is the administrative language of Mauritania, but in fact only educated people can speak it.