Privilege escalation is the act of exploiting a bug, design flaw or configuration oversight in an operating system or software application to gain elevated access to resources that are normally protected from an application or user. The result is that an application with more privileges than intended by the application developer or system administrator can perform unauthorized actions.

Most computer systems are designed for use with multiple users. Privileges mean what a user is permitted to do. Common privileges including viewing and editing files, or modifying system files.

Privilege escalation means a user receives privileges they are not entitled to. These privileges can be used to delete files, view private information, or install unwanted programs such as viruses. It usually occurs when a system has a bug that allows security to be bypassed or, alternatively, has flawed design assumptions about how it will be used. Privilege escalation occurs in three forms: 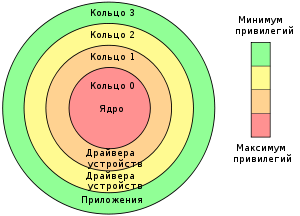 Privilege rings for the x86 available in protected mode

This type of privilege escalation occurs when the user or process is able to obtain a higher level of access than an administrator or system developer intended, possibly by performing kernel-level operations.

In some cases a high-privilege application assumes that it will only be provided with input that matches its interface specification, and doesn't validate the input. An attacker may then be able to exploit this assumption so that unauthorized code is run with the application's privileges:

A jailbreak is the act or tool used to perform the act of breaking out of a chroot or jail in UNIX-like operating systems or bypassing digital rights management (DRM). In the former case, it allows the user to see files outside of the filesystem that the administrator intends to make available to the application or user in question. In the context of DRM, this allows the user to run arbitrarily defined code on DRM-encumbered devices as well as break out of chroot-like restrictions. DRM-encumbered devices such as the Xbox, PSP, iPhone, iPod touch and iPad have repeatedly been subject to jailbreaks, allowing the execution of arbitrary code, but have had those jailbreaks disabled by vendor updates.

The iPhone in particular has been a fertile battle ground.[2][3] The iPod Touch/iPhone hacking community however, responds to the newest vendor updates by creating new ways to enable third party apps almost immediately. It was only in the wake of the popularity of the iPhone that the term jailbreaking became well known in popular culture worldwide.[citation needed]. Jailbreaking has expanded to support Cydia, a third-party "App store" to install ysem teaks and binaries. To prevent iOS jailbreaking, Apple has made the boot-rom to execute checks for SHSH blobs for not allowing Custom kernels to be uploaded to the system, and prevent software downgrade to earlier, jailbreakable firmwares. exploits permit execution of unsigned code in the device, and allow modifying the System to finally install Cydia. With an untethered jailbreak, The iBoot environment is changed to execute a boot-rom exploit and allow submission of a patched Low level boatloader or hack the kernel to submit the jailbroken kernel after the SHSH check.

A similar method of jailbreaking exists for S60 Platform smartphones, which involves installing softmod-style patches which involves patching certain ROM files while loaded in RAM[4][5] or edited firmware (similar to the M33 hacked firmware used for the PlayStation Portable)[6] to circumvent restrictions on unsigned code. Nokia has since issued updates to curb unauthorised jailbreaking, in a manner similar to Apple.

In the case of gaming consoles, jailbreaking is often used to execute homebrew games. In 2011, Sony, with assistance from law firm Kilpatrick Stockton, sued 21 year old George Hotz and associates of the group fail0verflow for jailbreaking the Playstation 3.[7]

Operating systems and users can use the following strategies to reduce the risk of privilege escalation:

This malicious activity may be possible due to common web application weaknesses or vulnerabilities.

Potential web application vulnerabilities or situations that may lead to this condition include: