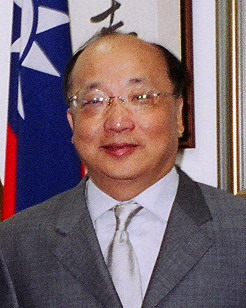 Jason C. Hu (Chinese: 胡志強; : Hú Zhìqiáng; b. 1948) is a former official in the national government of (Republic of China). He is currently serving his second term in the central city of . His current term ends in early 2010 and is ineligible for re-election. He is a member of the (KMT), the leading party in the alliance.

Hu was born in (then known as Peiping), , and was brought to Taiwan as a young child when the lost their civil war with the .

After graduating from Taichung Municipal First High School, then known as Juren (居仁) High School, Jason Hu attended where studied in the Diplomatic Studies Department. Following graduation in 1970, he went to study in the , first to the , where he studied International Relations, then to the where he received his PhD in International Relations in 1984.

When he returned to , he became a professor at the Institute for International Studies at . He would remain a professor there until he entered government service in 1990. [cite web|url=http://village.nat.gov.tw/dept/index.jsp?vcode=37659|title=臺中市(Taichung City)|accessdate=2006-10-19]

Jason Hu began his work in the central government when Taiwan was still a single-party state ruled by the Chinese Nationalist Party. He was the Director General for the from 1991 to 1996. He then represented Taiwan's government in Washington in 1996 and 1997 as the Director of the in Washington, before a two-year stint as the Minister of Foreign Affairs from 1997 to 1999. [ cite web|url=http://www.gio.gov.tw/taiwan-website/5-gp/yearbook/p446.html|title=Who's Who in Taiwan|accessdate=2006-10-19]

He has been trying to build up Taichung’s infrastructure since his election. He has seen the construction of a new baseball stadium, new amphitheater, and expansion of main roadways in the city. He has tried to bring a branch of the Guggenheim Museum to Taichung, but to this point, there has been no apparent success in these efforts.

A reason for the failure to bring the to may have something to do with the Terror Poster that was used as a part of the presidential campaign of and in the 2004 presidential race. [ cite web|url=http://www.asiamedia.ucla.edu/article.asp?parentid=9544|title=TAIWAN: Jason Hu let 'terror' poster stay in circulation|date=March 27, 2004|accessdate=2006-10-19]

The presidential election itself was very close, and hot tempers broke out all over the country, especially in and . There was also potential for serious trouble in as well as supporters had begun demonstrating overnight. Mayor Hu went out at about 3:30 in the morning and was successful in dispersing the one or two thousand people by 5:30. Mayor Hu remarked, "(b)ecause I knew that if I didn't do anything by 5:30 a.m., people getting out of bed would find out about it on the radio or television. There'd be 10,000, 20,000 people. By then you wouldn't be able to resolve it." [cite web|url=http://archive.wn.com/2004/04/07/1400/p/7d/561f34feee5b53.html|title= Taichung Mayor Hu discusses election campaign and aftermath|date=April 7, 2004|accessdate=2006-10-19]

Jason Hu won re-election with relative ease in the December three-in-one elections with a nearly twenty percent margin of victory over challenger . His second term began in early 2006 and will end in early 2010.

On , 2006, returning from a campaign rally for KMT Kaohsiung mayoral candidate Huang Chun-ying (黃俊英), the vehicle Hu and his wife Shaw Hsiao-ling (邵曉鈴) were riding in were hit by another vehicle and overturned. Hu suffered minor injuries, while Shaw suffered major injuries and had to be put into a drug-induced coma to preserve her life. Since then, she had come out of her coma and regained some ability to walk and talk, but her abilities to reason and to remember appeared to have been impaired.